After spending the past year on the east coast, we have been very anxious to get back to the great hiking sites of the west.  For the past month we’ve been slowly moving along US Rte. 2 heading for Glacier National Park.  Finally, we made it!  We set up the motorhome at a nice little RV park in East Glacier, MT and headed in to the Two Medicine area of Glacier National Park. 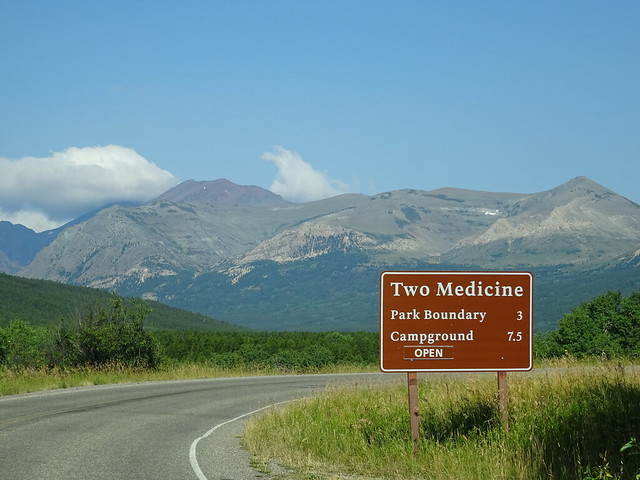 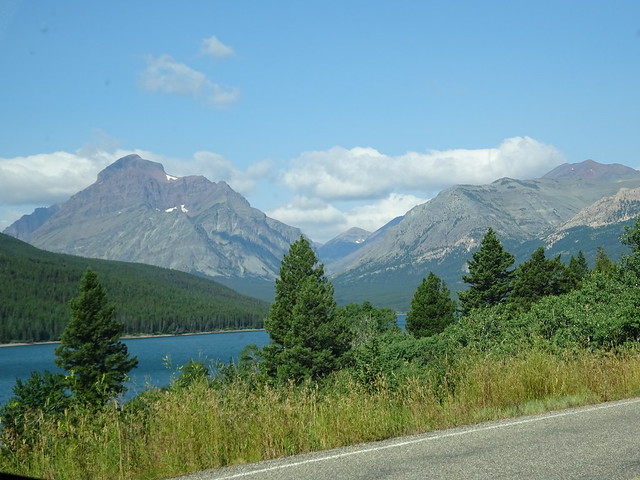 The view from the entry road to Two Medicine 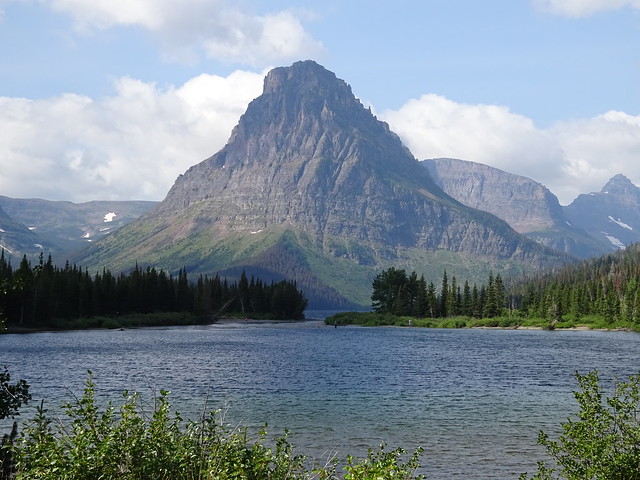 Two Medicine Lake with Sinopah Mountain in the background

Our first hike was along the southern shore of Two Medicine Lake.  But first, John had to practice his “Quick Draw McGraw” move with a can of bear spray. 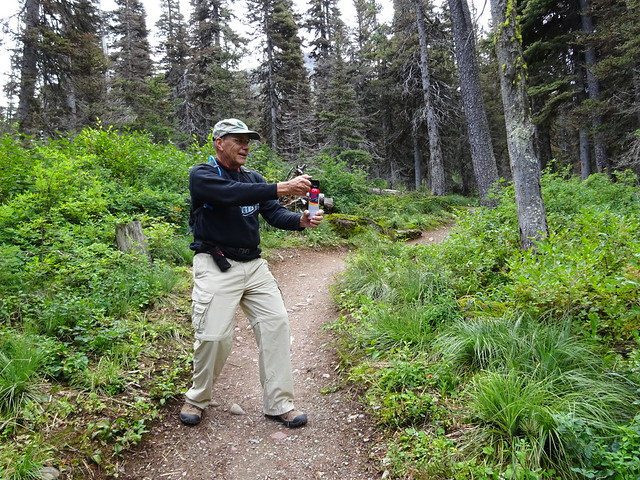 Our first stop was for a visit to Astor Falls. 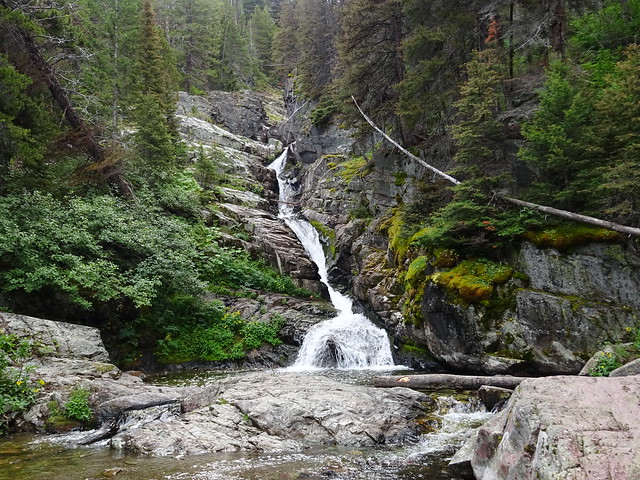 We then climbed up the side of the mountain for almost a mile to view the lake from Astor Park, a rocky outgrowth. 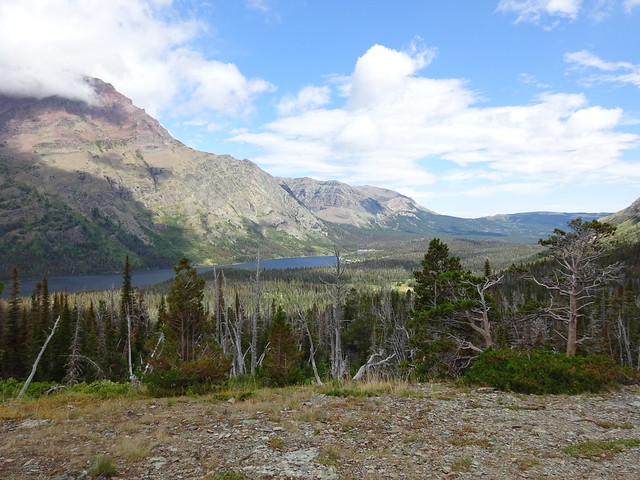 The view from Astor Park

Continuing our hike along the lake, we came to a suspension bridge over Paradise Creek.  It’s a solid structure but the walk across is a bit wobbly.  The bridge is removed by the Park Service for the winter. 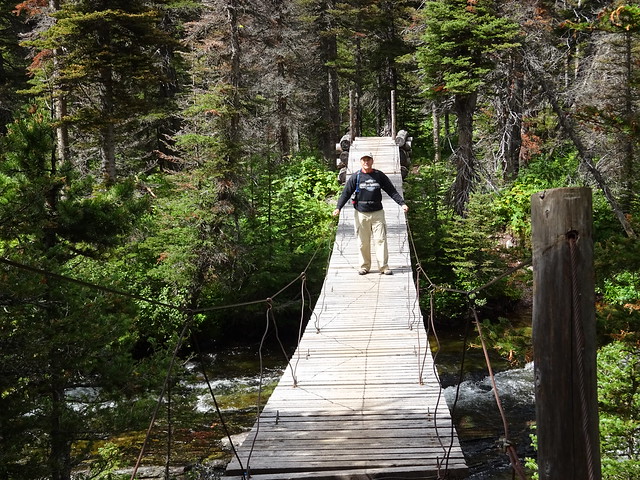 We finally came to our destination, the Rockwell Falls. 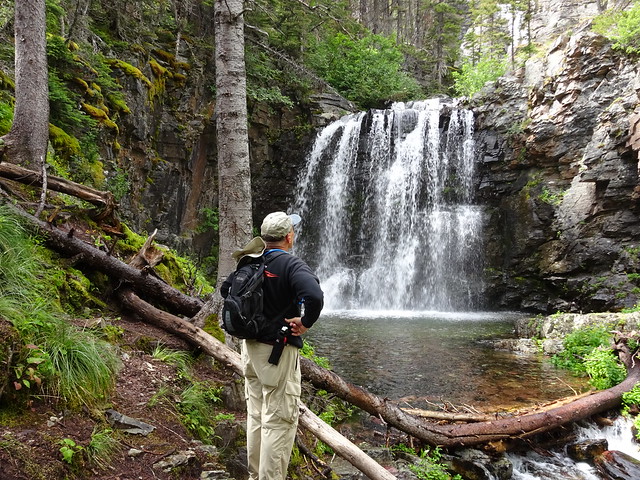 As we turned to head back, a light mist dampened the trail and shrouded the mountains around us. 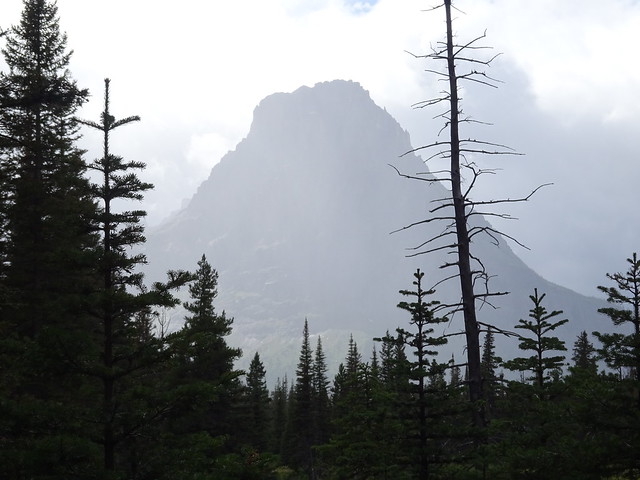 We returned to the Jeep after hiking over nine miles!  This was our first day of hiking and the altitude here is about 5,100 feet, so we had intended to make it a short, break-in hike.  But when Drill Sergeant Pam is in charge of planning, make sure you pack a lunch!

The next day the drill sergeant allowed our tired legs to rest a bit and only planned a short hike to Running Eagle Falls, a nearby waterfall that sounded interesting 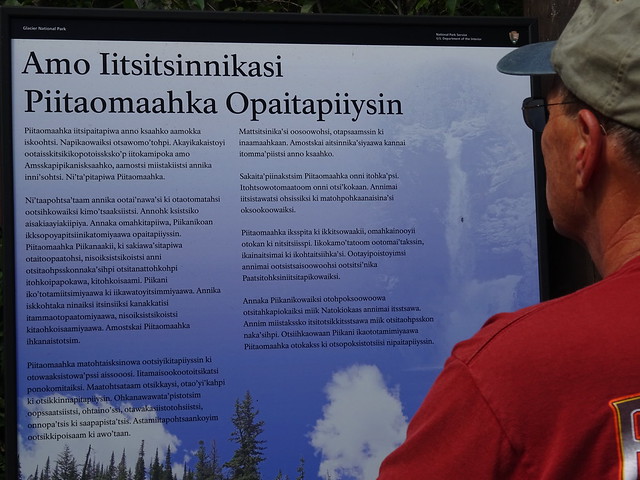 A tourist reads the story of Running Eagle

The waterfall is named after Pitamakan, or Running Eagle, a female warrior leader of the Blackfeet Nation in the early 1700s 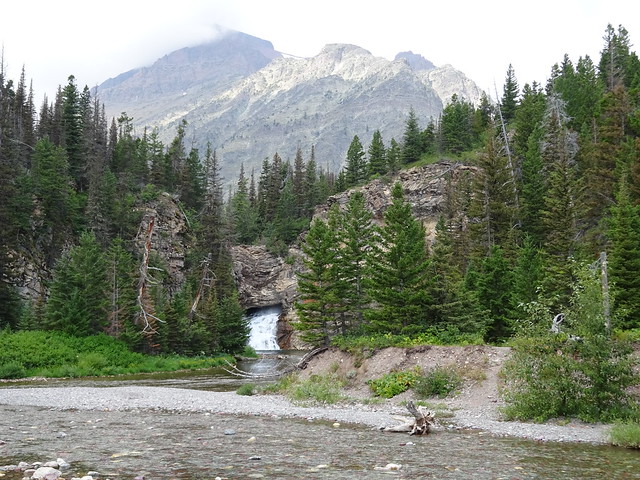 The waterfall receives its nickname, “Trick Falls,” because there are actually two separate waterfalls in the same location. During the spring run-off water rushes over the top ledge for a 40-foot drop, while obscuring the lower falls. However, by late summer, after the upper falls has dried up, water continues to rush through a sink hole at the top of the cliff before flowing out of an opening in the cliff face, thus creating the lower 20-foot falls. 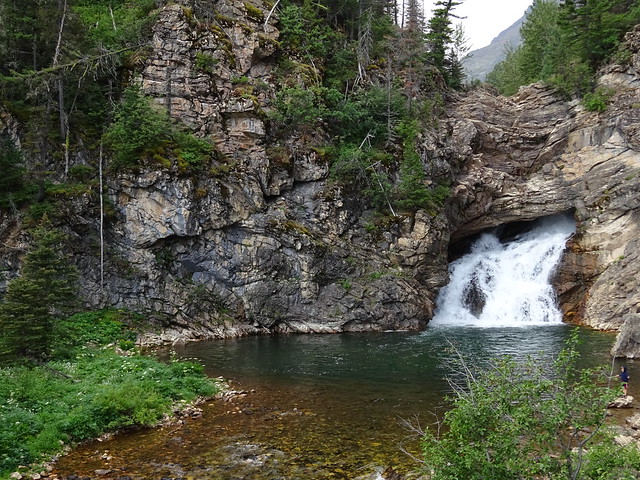 The next day our legs were feeling strong again, so the drill sergeant planned a hike completely around Two Medicine Lake, with a little side trip to Upper Two Medicine Lake, a mere 12.6 miles!  The views along the north shore of the lake were fantastic. 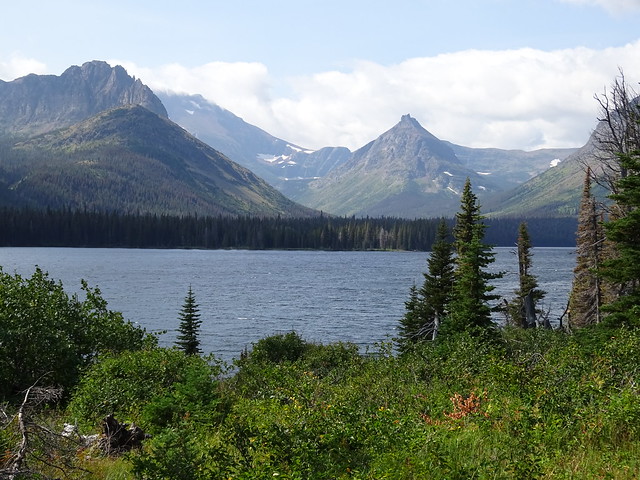 Beyond the west end of the lake,  the 7620-foot Pumpelly Pillar came into view directly in front of us.  The glacially carved, cone-shaped rock is named after Raphael Pumpelly, leader of the Northern Transcontinental Railway Survey party that crossed Pitamakan Pass in 1883. 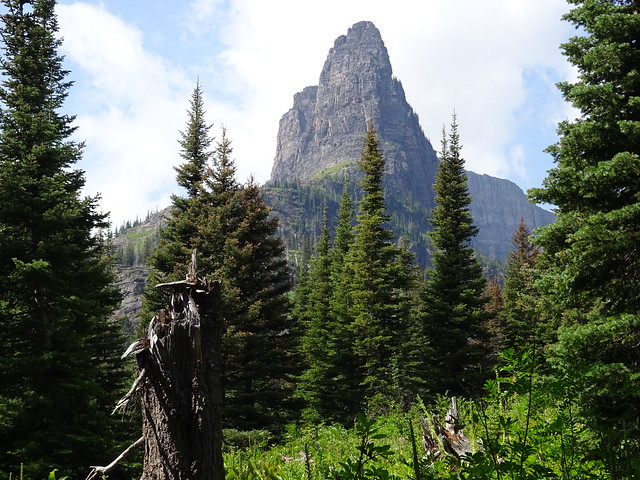 After hiking around the pillar, we took a short spur trail to Twin Falls.  Twin Falls is a beautiful set of cascades flowing off the eastern slopes of Pumpelly Pillar. The two falls are separated by roughly 50 feet before converging again near the trail. 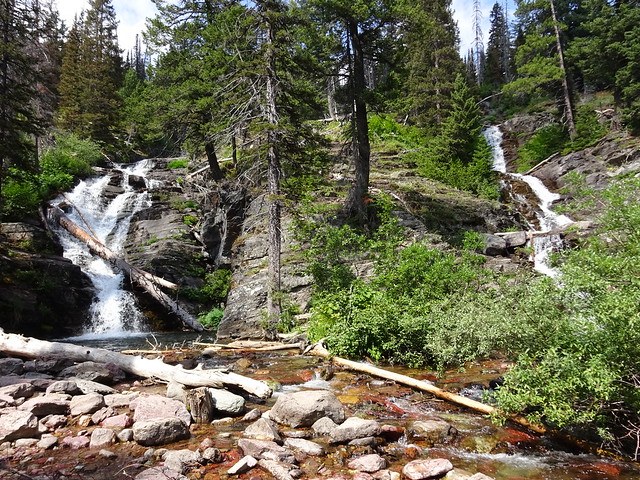 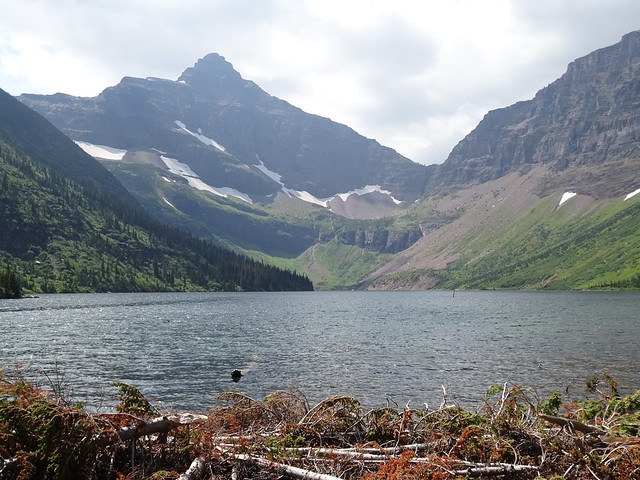 As we hiked to and from the Upper Two Medicine Lake we stopped a few times to sample one of nature’s tastiest treats, Huckleberries. 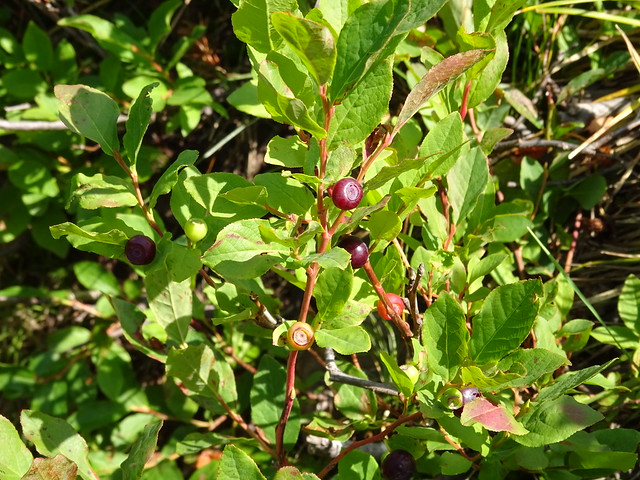 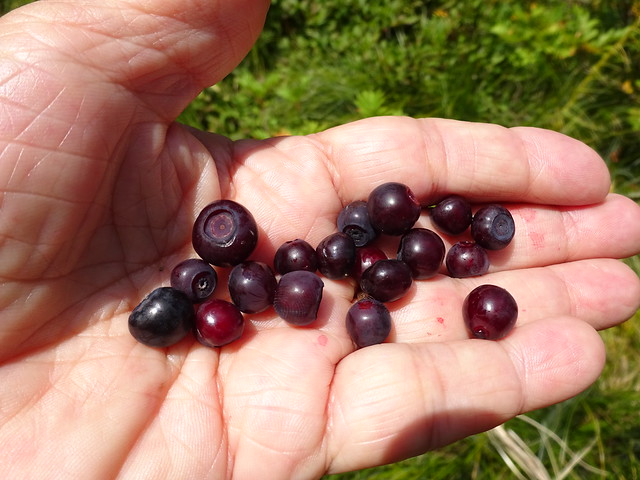 On the return hike, we took the southern trail back around Two Medicine Lake.  The first part of the trail around the lake goes up the side of a mountain, providing some stunning views of the lake and surrounding mountains.  Below us on the lake we spotted the shuttle boat that ferries hikers from the lodge at the east end of the lake to a small dock on the west end.  Taking the shuttle shaves 2.2 miles off the hike in each direction, but our drill sergeant would have no part of the shuttle! 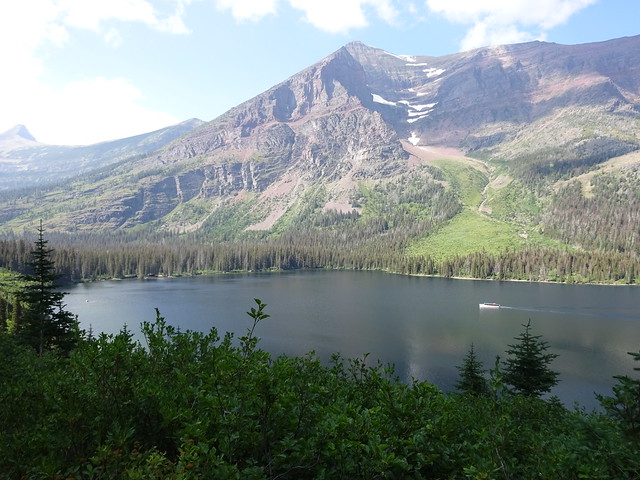 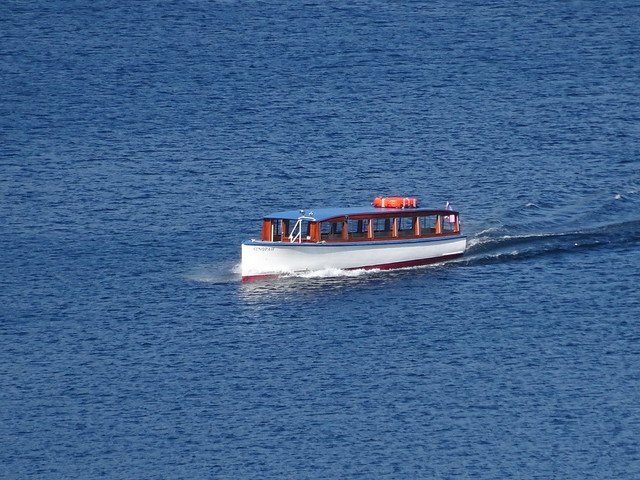 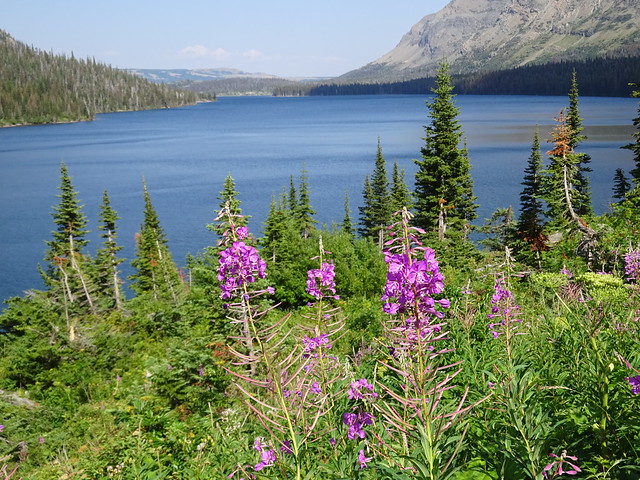 Beautiful wildflowers can be spotted all along the shoreline

These three hikes were a wonderful way for us to return to the west.  But one more hike is in front of us before we move to the north.