Havre (pop 9,300) is another one of a string of towns along US Rte. 2 built by the Great Northern Railroad.  We stopped here for two nights to look around the town and to visit a well-known buffalo jump.  The Wahkpa Chu’gn Buffalo Jump, or bison kill, is one of the largest and best preserved buffalo jumps anywhere.  In prehistoric times, Native Americans would drive bison over the edge of the cliff, killing or severely injuring the animals.  Afterwards, the Native Americans skinned the animals and preserved the meat. The buffalo jump is now an archaeological site and a small tourist attraction.

The site is located in a somewhat strange place, directly behind the Holiday Village Shopping Center.  The parking lot for the shopping center is in need of paving and the shops are a bit run down, so we first though we might be in the wrong place. 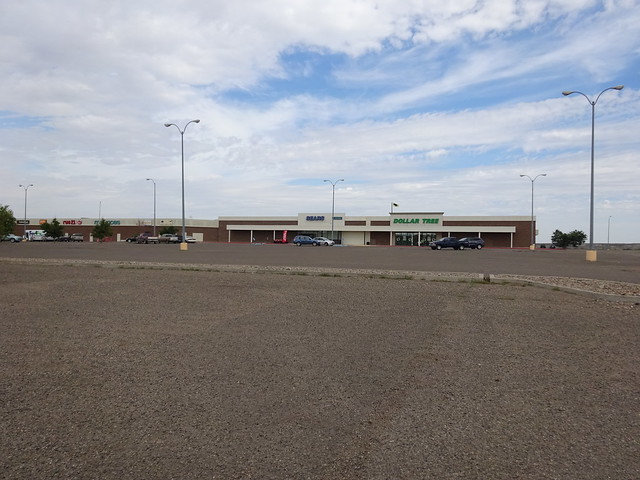 The site is right behind this strip mall 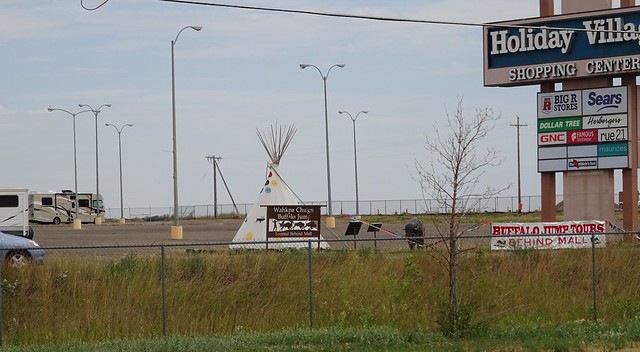 But we drove around the back of the mall and, sure enough, there was the buffalo jump. 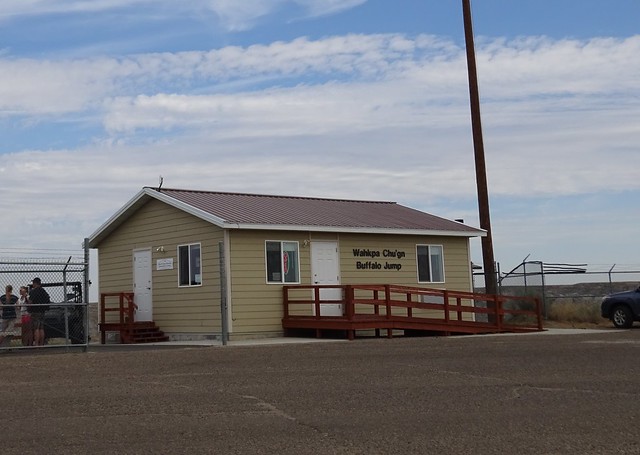 The cliff was much higher when it was lasts used over 600 years ago but erosion has lessened the drop-off. 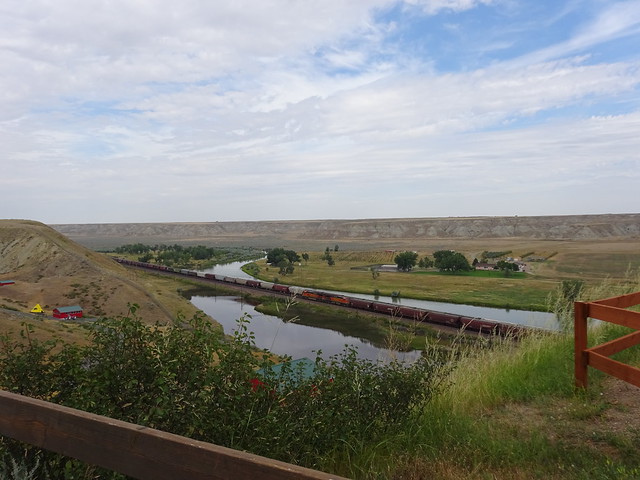 Looking down from the top of the cliff

After our tour we drove around to the other side of the Milk River to get a different view of the jump.  The red building in the middle of the picture covers the main dig site. 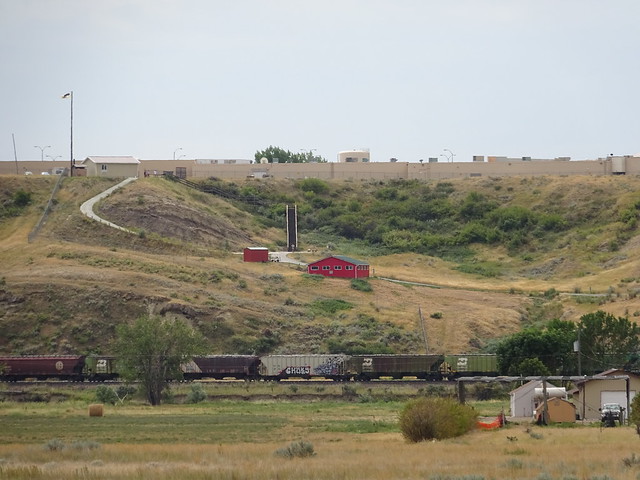 We were fortunate that a tour was just beginning as we arrived.  So we quickly joined the tour guide and headed down the stairs. 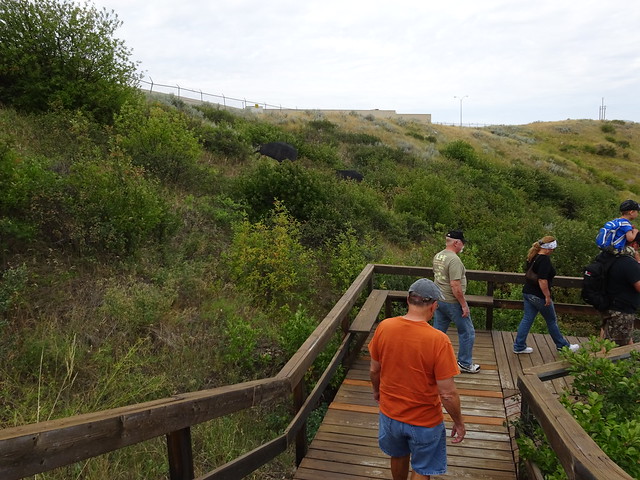 Heading down the the bottom of the jump area 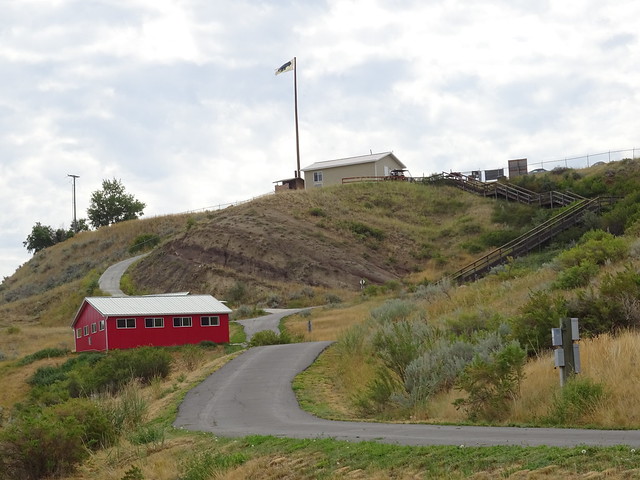 Looking up from the bottom of the jump

The red building above is one of the three covers for archaeological digs that have uncovered bones of the buffalo killed there. 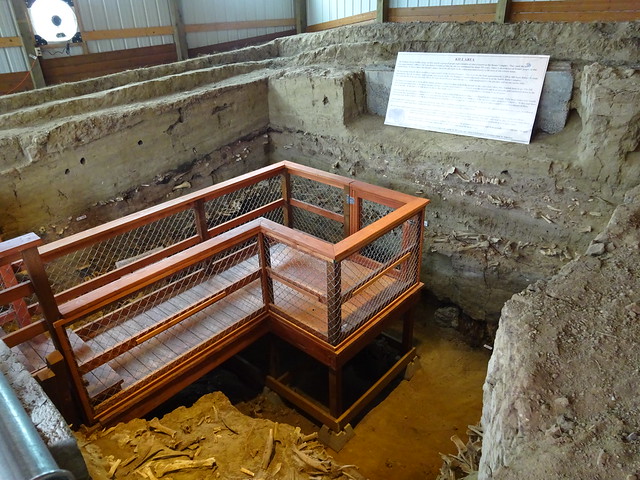 The layers of bone show that the site was used then abandoned for long periods of time. 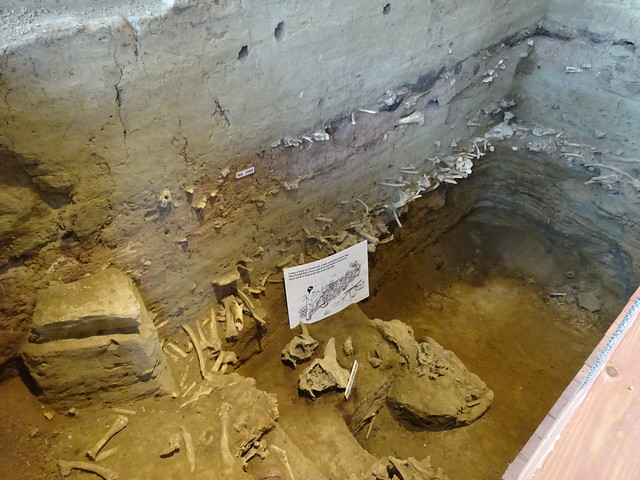 The red area in the middle of the picture above, and shown in a close up below, is a blood stain.  It indicates that large number of buffalo were butchered on this spot, known as a kill area. 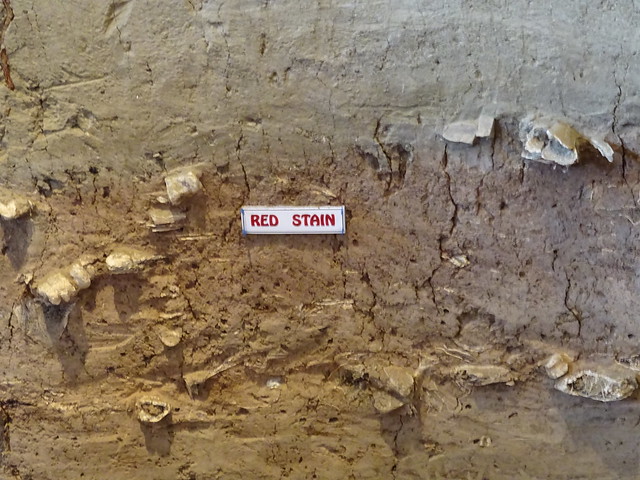 We were fortunate to observe and participate in a demonstration of how the Native Americans quickly cooked the meat of the slaughtered animals.  The women would dig a hole in the ground, line it with buffalo skin, and fill it with water.  They would then heat up rocks in a nearby fire and drop them into the water, very quickly bringing it to a boil.  The man doing the demonstration used a bucket instead of a hole in the ground. 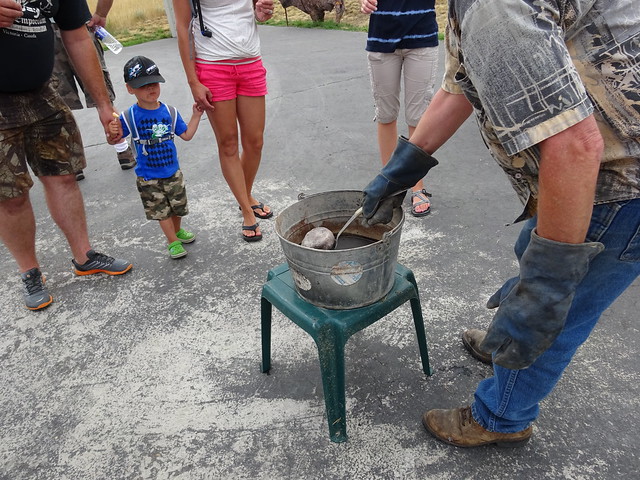 Each of us was given a piece of raw buffalo meat in a long stick. 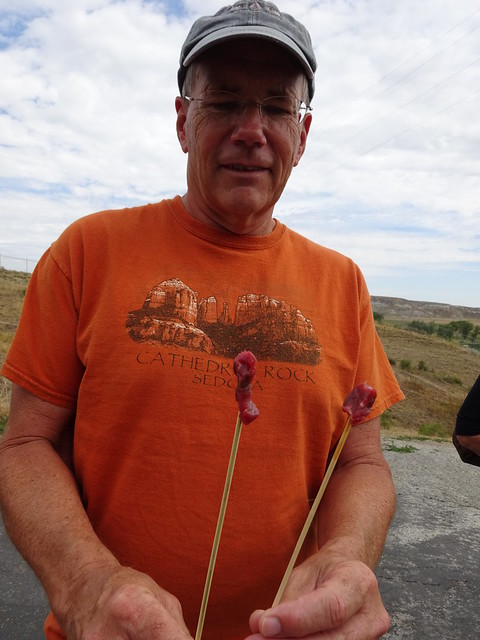 Once the water came to a boil we put the meat into the water for about a minute.  It tasted delicious. 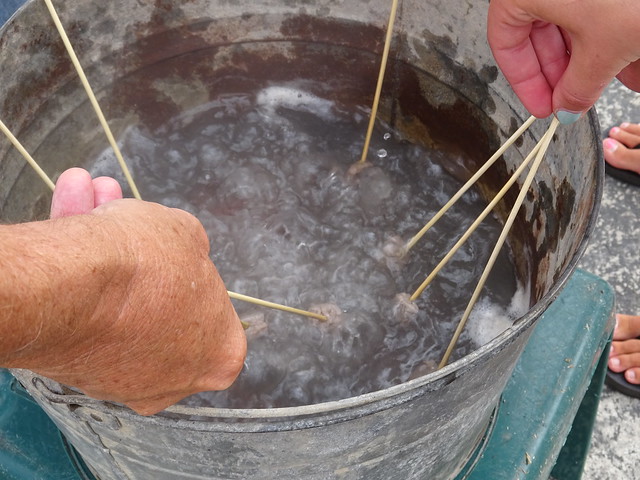 The buffalo jump was in use at a time before there were horses in North America and before the bow and arrow.  Native Americans used a throwing stick, or Atlatl, to throw their spear with greater velocity.  Our tour guide demonstrated its use for us. 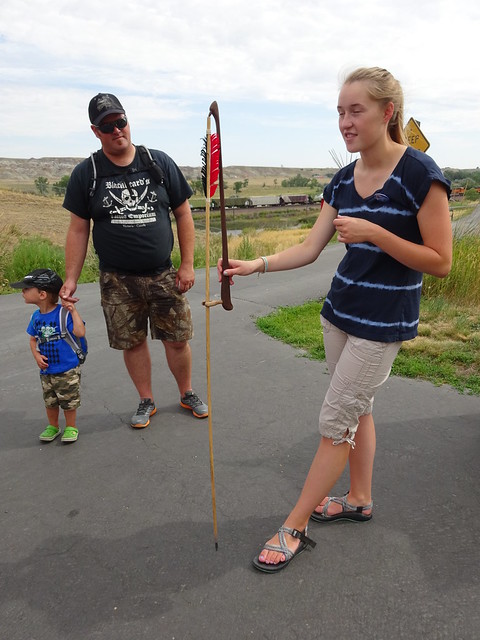 After that each member of the tour was given an opportunity to hit a buffalo passing in front of us. 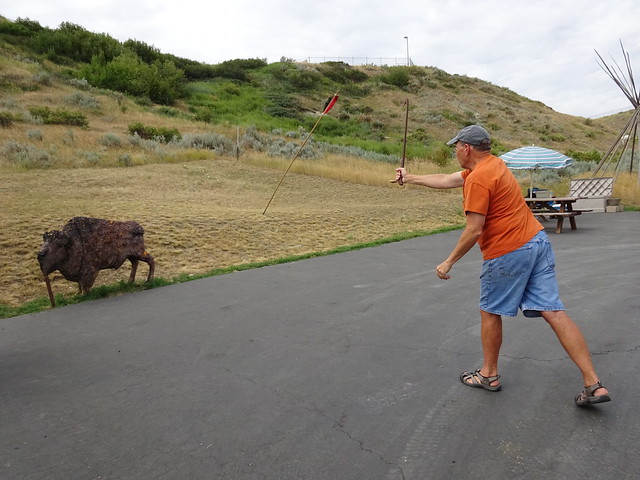 A bit short on that one, buddy! 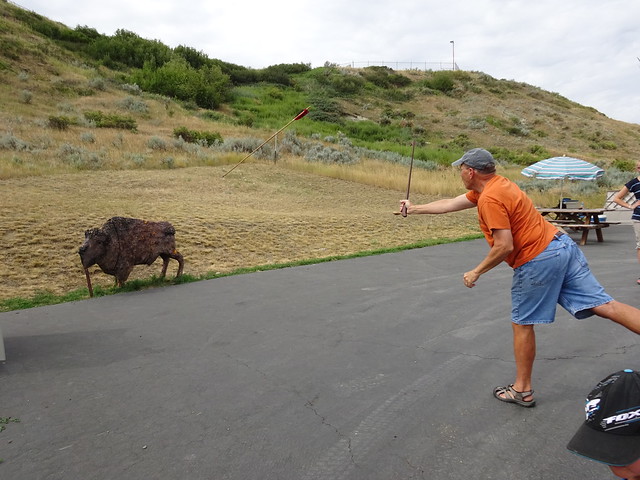 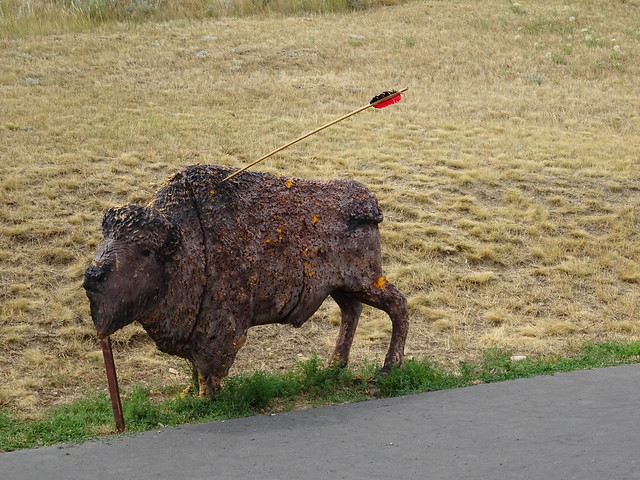 Now we can stock the motorhome with food for the winter 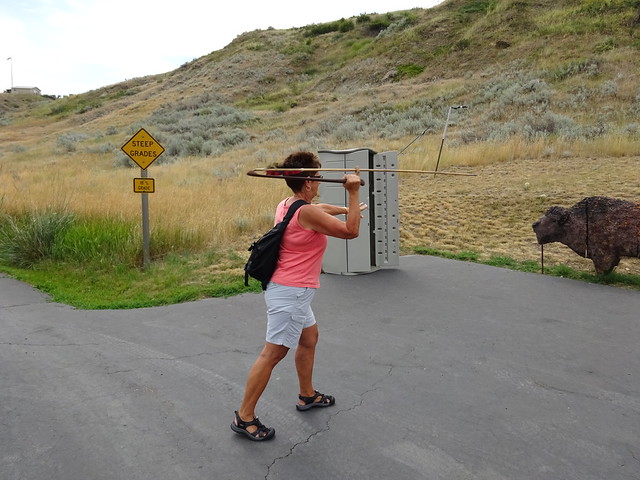 Fortunately, no one was hurt during this attempt! 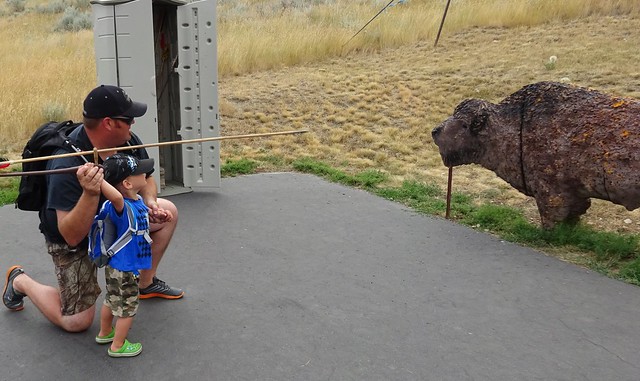 The youngest member of our group gives it a try

The tour of the buffalo jump was the highlight of our visit to Havre.  Next up, Glacier National Park!

17 Responses to A Buffalo Jump