After entering Montana from the east, the first town of any size on Rte. 2 is Glasgow (pop. 3,250).  We took a site there for one night in a nice little RV park behind a motel and set out to see the sights in this little town. 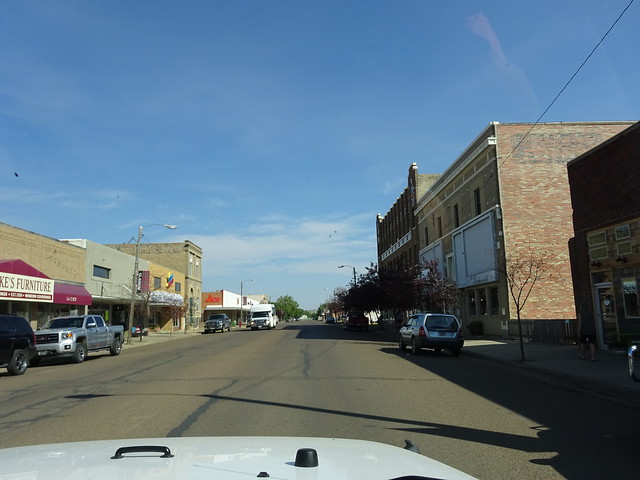 The main drag in downtown Glasgow

Seems like almost everyone in Montana drives some sort of large, loud pick-up truck.  Check out the vehicles outside a local watering hole in the downtown (in the middle of a Wednesday afternoon).  The right side of the street is nothing but pick-ups!

OK, the downtown tour didn’t take very long.  So what else is there to see in the Glasgow area?

During the 1960s, Glasgow had double the population it has today, due to an Air Force base about 15 miles north of town that closed in the late 60s.  When John looked at the base on Google Satellite, it appeared that the runway was still in usable shape.  And it also looked like cars were parked outside some of the old base housing units.  What’s up with that?  We couldn’t resist driving north across the prairie to check this place out.

A little research revealed another great example of your tax dollars at work.  Glasgow Air Force Base was opened in 1957 as a fighter base.  In 1960 it became part of the Strategic Air Command (SAC) and the runway was expanded to accommodate giant B-52 bombers.  The B-52s were transferred to Southeast Asia during the Vietnam War and the base closed in 1968.  So the military built this large facility, complete with housing, schools, and recreation areas, and abandoned it after eleven years!

The runway itself and surrounding buildings are now owned by the Montana Aviation Research Company, a subsidiary of the Boeing Company.  Boeing maintains the 13,000 foot runway and  uses the facility as a test facility for new aircraft. 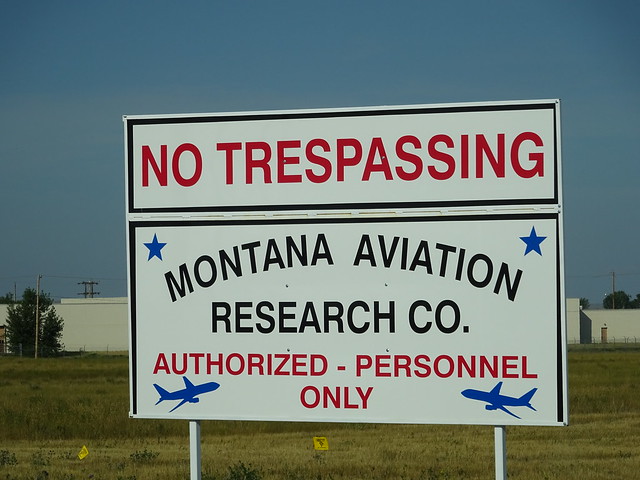 Today most of the extensive facilities built by the military to support the base stand empty and in decay. 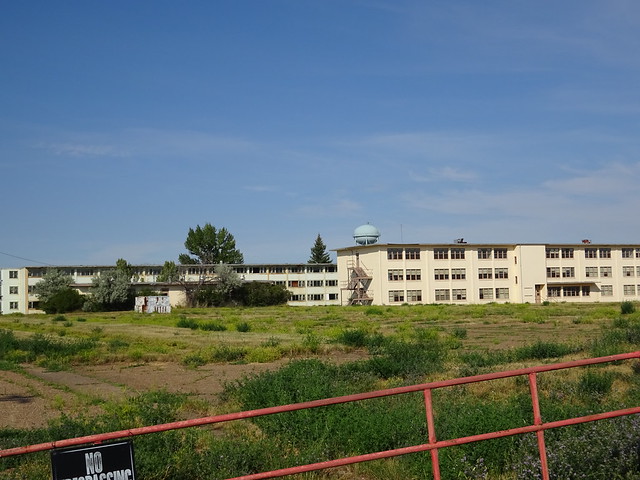 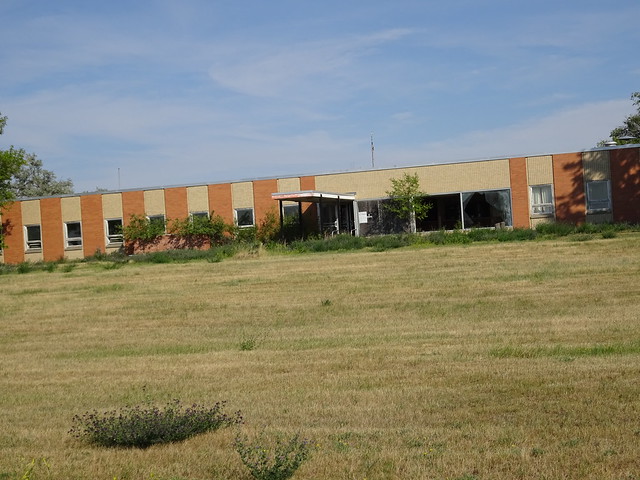 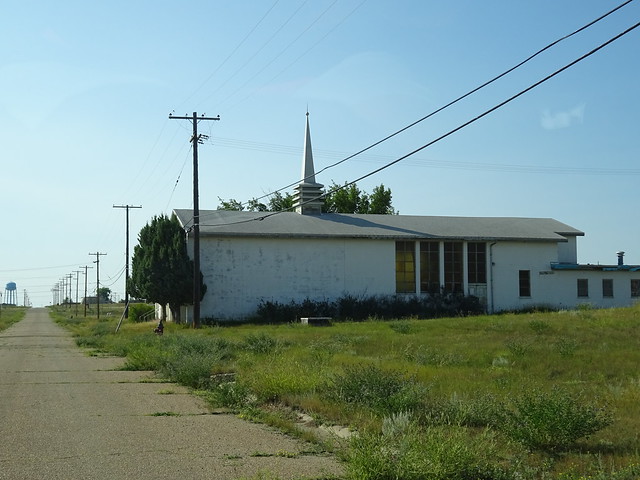 When the base closed, the housing was purchased and offered for sale to private individuals.  Most of the base housing stands empty and dilapidated.  But about 240 hardy people own and live in homes they purchased from the government that is now a community called St. Marie, MT. 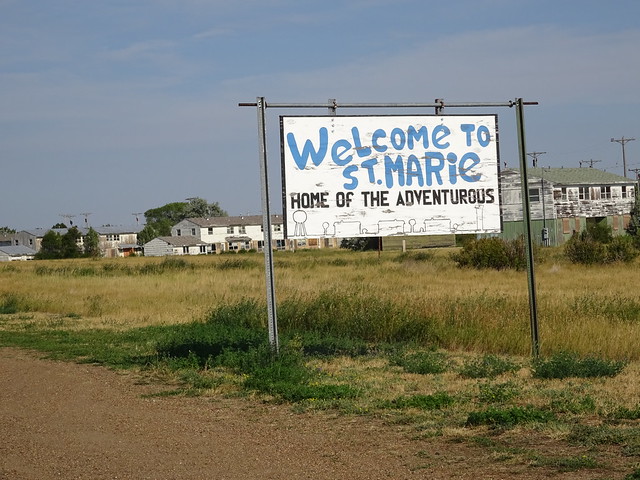 A ride through the community reveals a very strange situation.  Some of the houses are well-maintained with nicely trimmed lawns. 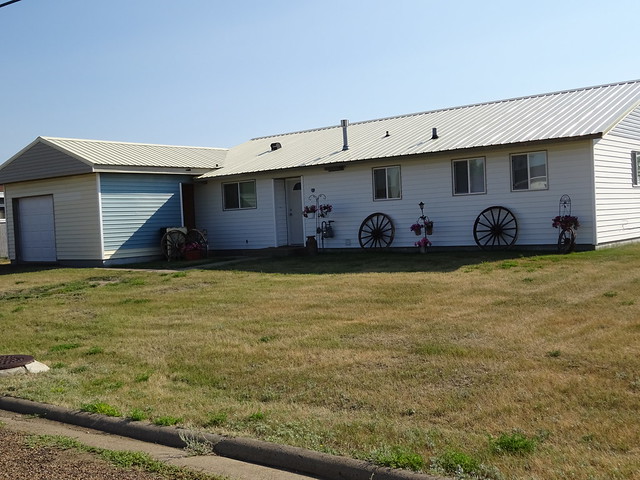 But they are then surrounded by dozens of houses that look like this. 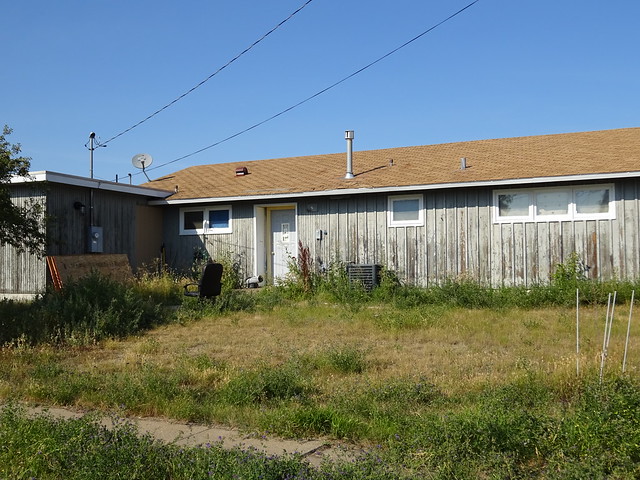 A few of the many duplexes are also in great condition. 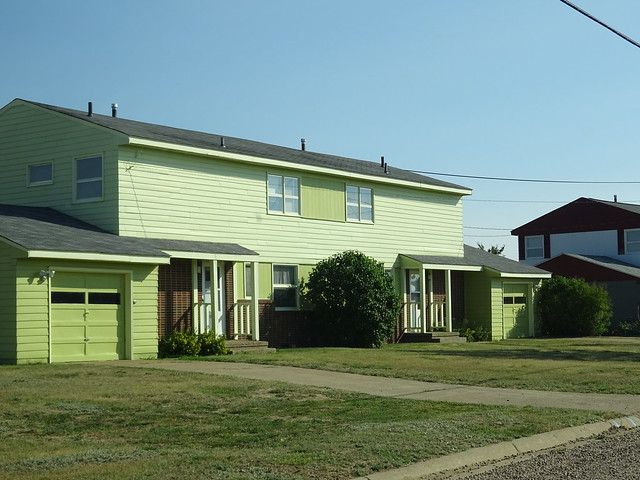 But again, they are surrounded by many that look like this one. 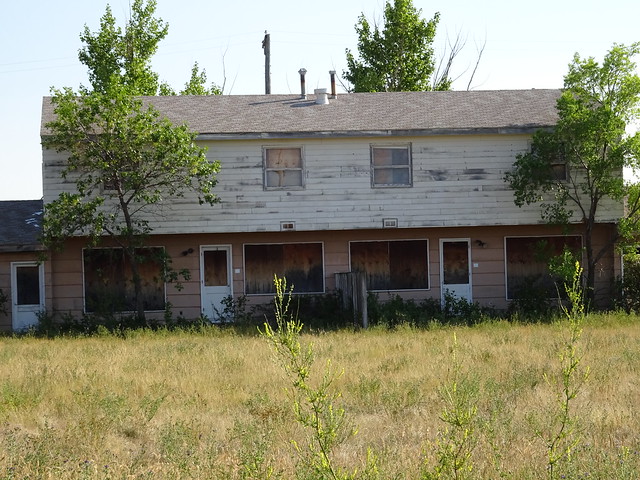 A ride through the pot-hole filled streets of the former base housing area known as St. Marie borders on the bizarre.  The people we did see there seemed very friendly (some even waved to us) and happy, but imagine living in a ghost town on the Montana prairie 15 miles from the nearest small town!