We drove a bit over a hundred miles from our last stop in Bemidji, MN to visit Grand Forks, ND.  We are parked across the Red River from Grand Forks in neighboring East Grand Forks, MN.  Sherlock RV Park is in the Red River State Recreation Area, a park that runs along the east bank of the river.  The State Recreation Area connects with parks along the other side of the river to form the Greater Grand Forks Greenbelt.  The greenbelt was developed to provide a clear area along the river that allows for future flooding.  The RV area is located in what use to be the residential neighborhood of Sherlock, which was destroyed by the Flood of 1997.  After the flood the state of Minnesota purchased all the property and turned it into the RV park.  As a result, the roads in the park are all the old neighborhood streets and the RV sites are located where front yards were before the flood. 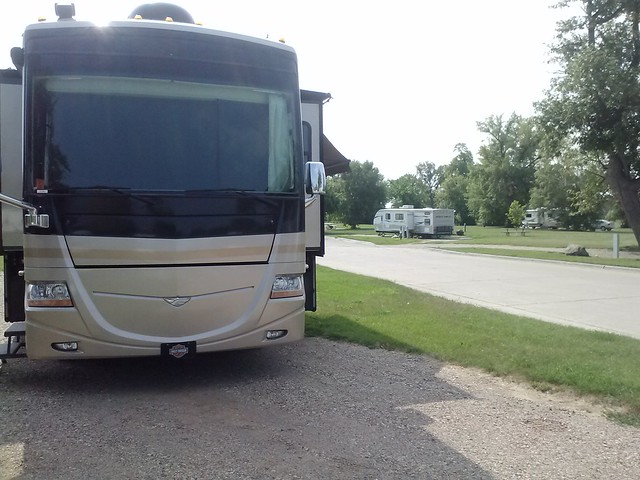 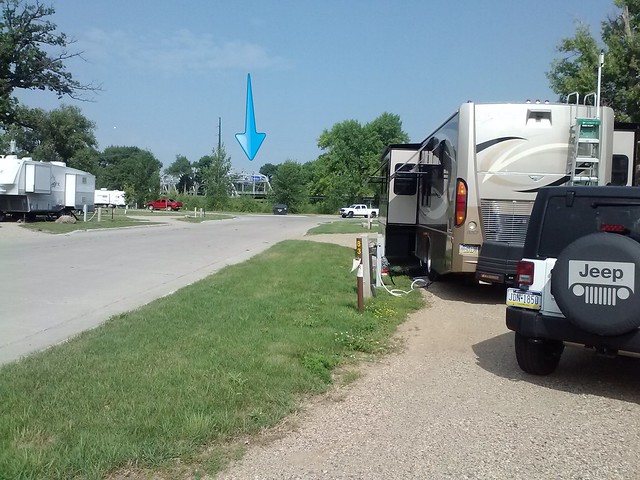 Below the arrow in the center of the picture above you can see a bridge.  It is the bridge that carries US Rte. 2 over the Red River.  The zoom picture below shows the welcome sign for North Dakota. 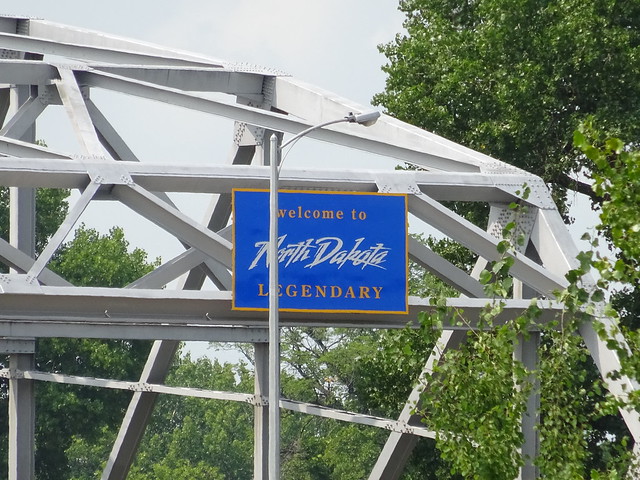 We rode our bikes along the path next to the river and crossed another bridge into Grand Forks.  After first enjoying a refreshing drink at a local Seattle-based coffee shop, we headed for a tour of the University of North Dakota. 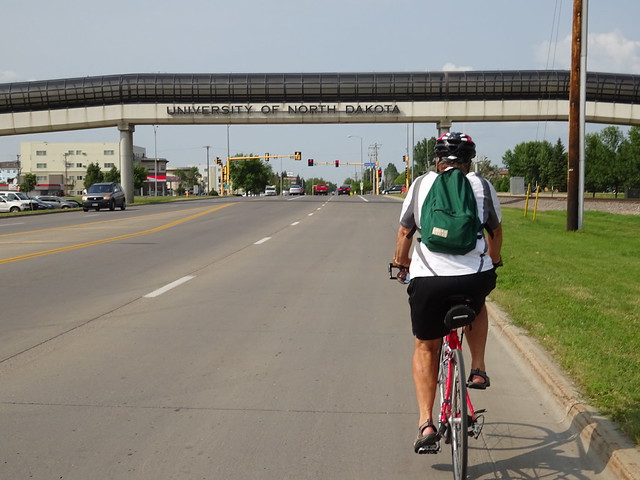 You know the winters are cold when many buildings are connected by long, enclosed walkways

In the world of college athletics the University of North Dakota is well known for its ice hockey teams.  The men’s ice hockey team has won seven national championships and has been runner-up five times.  They both play in the Ralph Engelstad Arena, a very, very impressive facility on the edge of the campus.  The arena, which seats 11,643, has been called the “Taj Mahal of hockey.”  The $104 million building was built with materials that would not usually be found in such a facility.  For instance, the concourses  are covered in granite flooring, each spectator seat is made of Cherry wood and leather upholstery, escalators bring spectators between levels, and full-color LCD displays dot the arena.  Wayne Gretzky has called the structure “one of the most beautiful buildings we have in North America.”

A little research on the namesake of the arena proved to be interesting.  It turns out that UND alumnus Ralph Engelstad made his money owning casinos in Las Vegas and Mississippi.  He was also a Nazi sympathizer.  He raised accusations of being sympathetic to Nazism owing to his collection of Nazi memorabilia stored in a private room within a casino-hotel, including a painting of himself dressed in a Nazi uniform (captioned “To Adolf from Ralphie”), a painting of Hitler with the reverse caption, and a collection of antique cars alleged to have once belonged to German Nazi leaders.  On April 20 in 1986 and 1988, he hosted parties to celebrate Adolf Hitler’s birthday at his casino in Las Vegas that featured bartenders in T-shirts reading “Adolf Hitler — European tour 1939-45”. Because of this, in 1989, the Nevada Gaming Commission fined Engelstad $1.5 million “for actions that damaged the reputation and image of Nevada’s gaming industry.”

Engelstad also became involved in a fight over the Fighting Sioux logo of the university. When there was a possibility that the school would change its mascot, he threatened to withdraw funding midway in construction of the arena if the long standing nickname were to be changed.  The logo was placed in thousands of instances in the arena, making the prospect of removal a costly measure. Later, Engelstad placed the stadium under private (rather than University) management and stipulated that the Fighting Sioux motif be kept indefinitely.  An Engelstad family trust continues to own the arena and rents it to the University.  In  2012, after a state referendum, the university dropped the nickname Fighting Sioux and it has no nickname today.

Outside the main entrance to the arena is a beautiful statue of the great Sioux leader Sitting Bull. 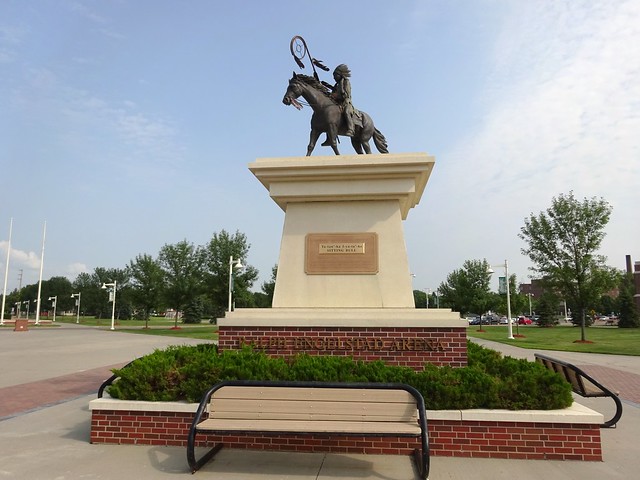 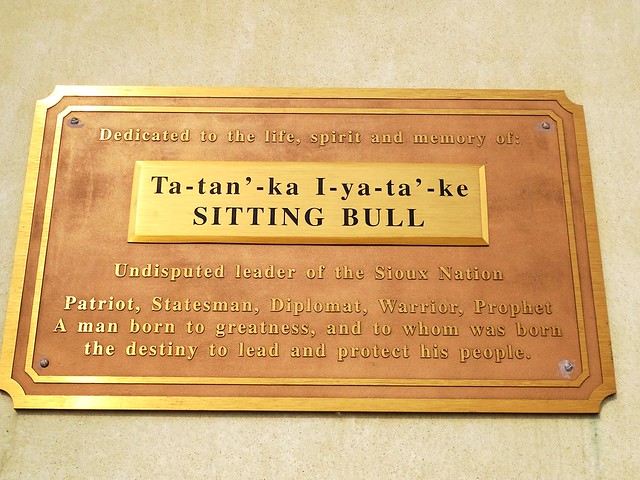 Riding back along the river we came upon the marker pictured below showing flood levels of the Red River for over a hundred years. 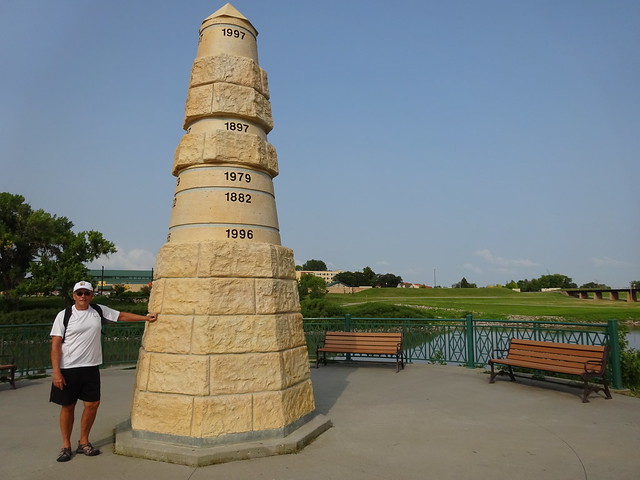 After the devastation of the 1997 flood the two communities of Grand Forks and East Grand Forks devised a way to protect the cities against future floods while keeping some views of the river.   Its called an invisible flood wall. 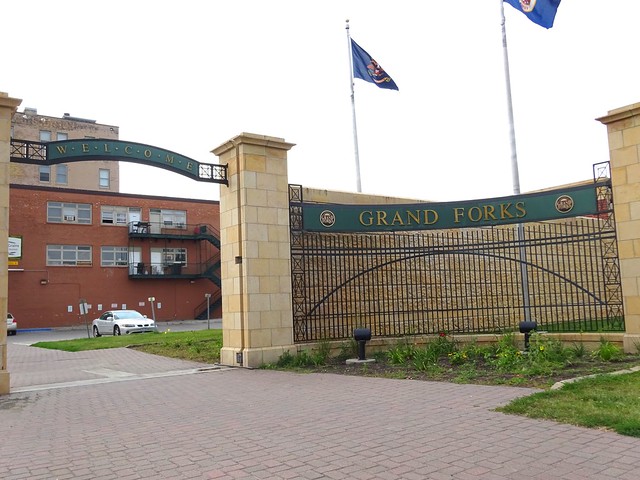 A series of dirt levees and walls were built along the river.  Openings in the walls allowed roads to cross the river and maintained river views for the downtowns.  The openings in the flood wall have a wide vertical groove in each pillar. 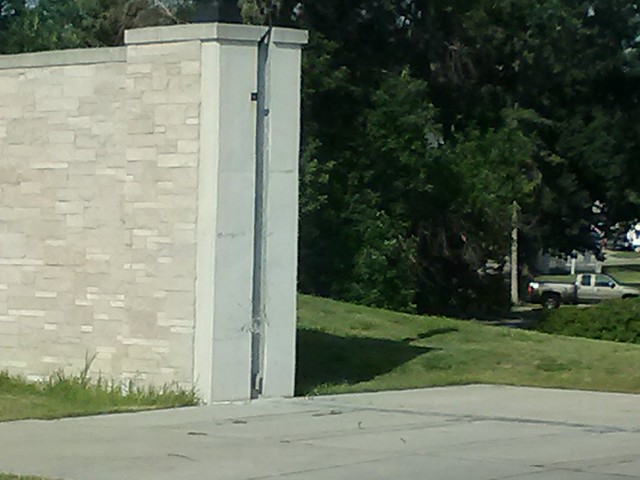 If flooding is imminent, metal beams are placed across the opening and are locked into the grooves, preventing water from entering the downtowns.

The invisible flood walls have been effective in protecting the downtown areas of the two cities in recent floods.

After our short stay in Grand Forks, we are off to Devils Lake where Terry and LuAnn are waiting for us at Grahams Island State Park.  More on that later . . .