A Visit to Marquette, MI

The second day of our stay here we drove a few miles to the west to visit the city of Marquette.  With a population of over 21,000 Marquette is the most populated city of the Upper Peninsula. It is a major port on Lake Superior, primarily for shipping iron ore, and is the home of Northern Michigan University.  In 2012, Marquette was listed among the 10 best places to retire in the U.S. by CBS Money Watch.

We were taking a drive around the campus of Northern Michigan University when we came upon the strange building pictured below.  It looks a bit like a UFO sitting right in the middle of some athletic fields. 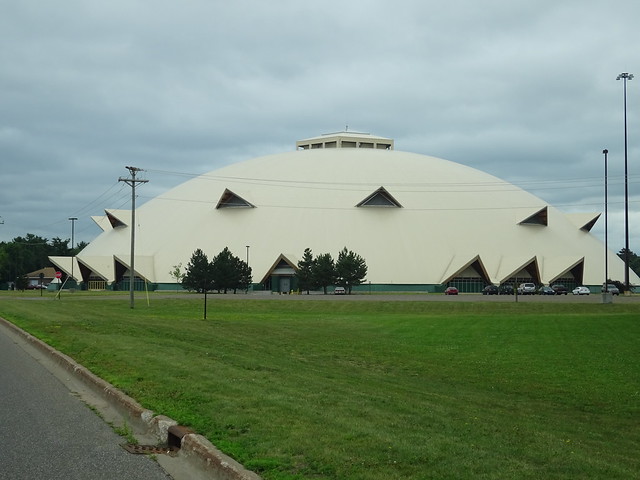 Is this a UFO or what?

It turns out the building is called the Superior Dome, but to the locals it is the Yooper Dome (residents of the Upper Peninsula are called Uppers, or Yoopers) and is an indoor athletic facility.  It holds over 8,000 people and is where the UNM Wildcats play home football games. 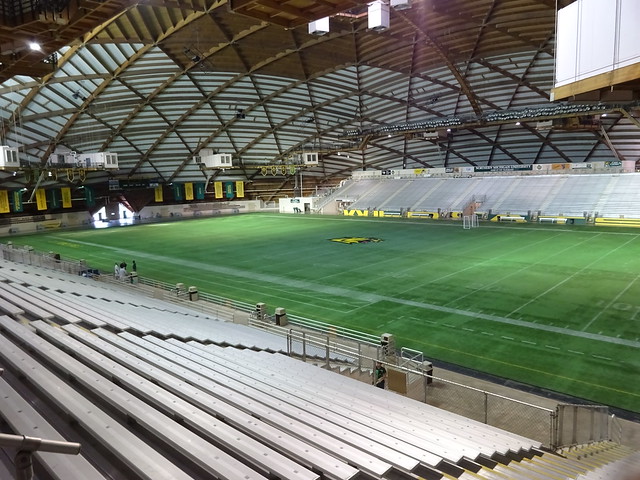 The dome is 14 stories tall, has a diameter of 536 ft, and covers an area of 5.1 acres.  It is a geodesic dome constructed with 781 Douglas Fir beams and 108.5 miles of fir decking. The dome is designed to support snow up to 60 pounds per square foot and withstand 80 mile per hour winds.  It has a permanent seating capacity of 8,000, though the building can hold as many as 16,000 people. The “Book of World Records – 2010” listed it as the fifth-largest dome and largest wooden dome in the world. 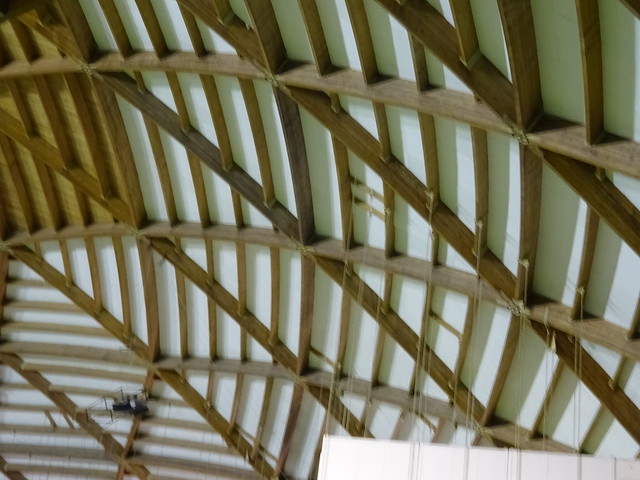 The Dome features a retractable artificial turf carpet, the largest of its kind in the world. When extended, the turf can accommodate football, soccer, and field hockey.  Underneath the carpet is a synthetic playing surface that features three basketball/volleyball courts, two tennis courts and a 200 meter track.  The carpet is winched in and out of place on a cushion of air.  Retracting the turf carpet takes 30 minutes, with full setup taking about two hours. 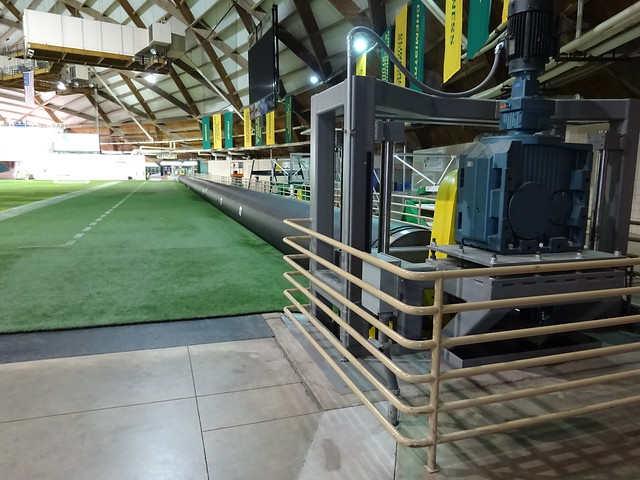 This device rolls up the synthetic carpet

While reading some of the displays in the concourse area we learned that the university is a United States Olympic Education Center. 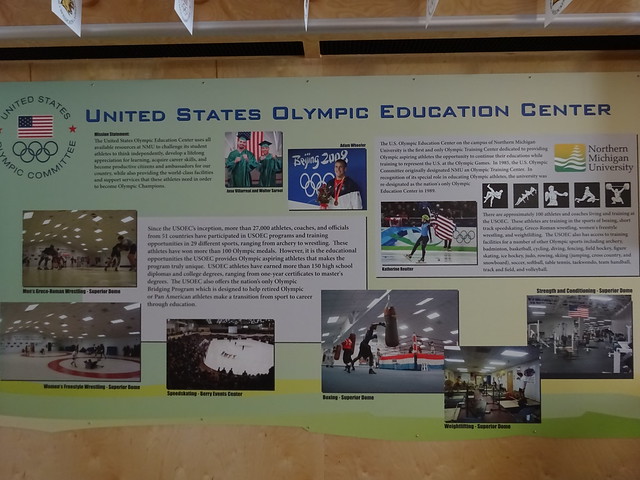 The United States Olympic Training Site (NMU-OTS) is one of 16 Olympic training sites in the country. With more than 70 resident athletes and coaches, the NMU-OTS is the second-largest Olympic training center in the United States, in terms of residents, behind Colorado Springs. The USOEC has more residential athletes than the Lake Placid and Chula Vista sites combined. Over the years, it has grown into a major contributor to the U.S. Olympic movement.

Current resident training programs include Short Track Speed Skating, Greco-Roman wrestling, weightlifting and women’s freestyle wrestling. NMU-OTS athletes attend NMU or Marquette Senior High School while training in their respective sports. They receive free or reduced room and board, access to world-class training facilities as well as sports medicine and sports science services, academic tutoring, and a waiver of out-of-state tuition fees by NMU.  Although responsible for tuition at the in-state rate, they may receive the B.J. Stupak Scholarship to help cover expenses.

We continued our driving tour along the shore of Lake Superior and came upon another strange looking structure, what appeared to be a large pier jutting out into the lake. 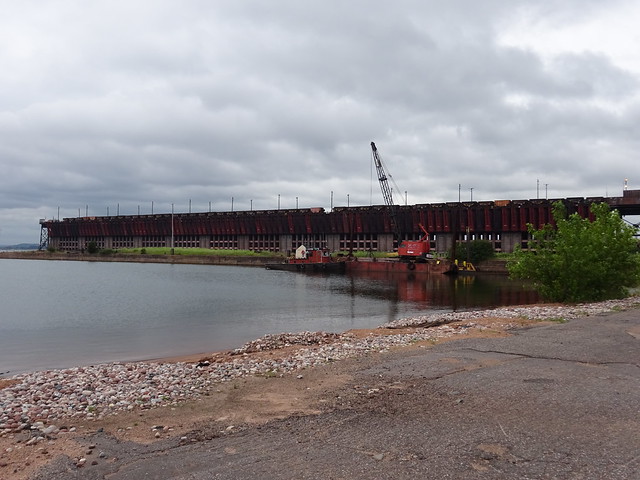 A closer look revealed full rail cars on top of the structure. 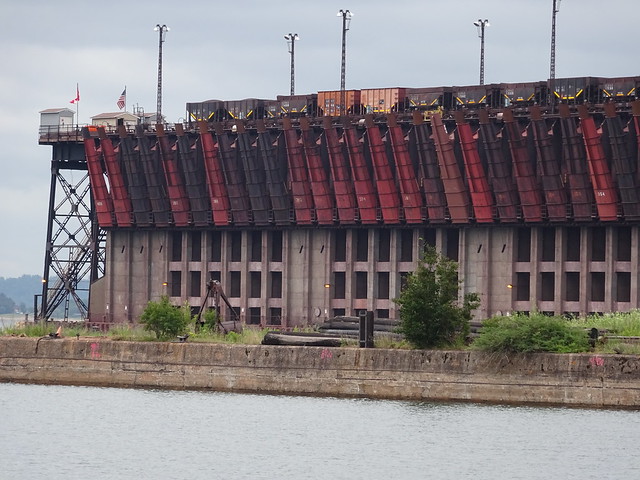 A nearby placard revealed the structure to be the Presque Isle Ore Dock. 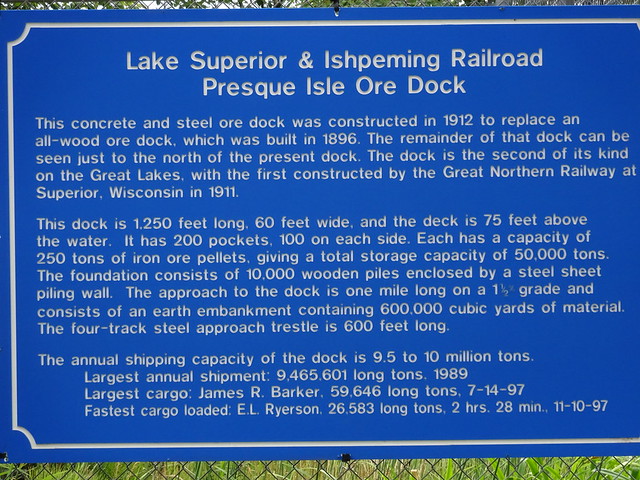 This ore dock was built in 1911 and still serves the iron-ore industry today.  The way it works is the rail cars are pushed on to the dock and over top of one of the 200 bins.  A door on the bottom of the rail car is then opened and the iron ore pellets spill into the bin below.  A giant ore boat pulls alongside the dock as shown in the picture below (copied from a web site).

A large chute connected to the bin is then lowered over the ore boat and the ore pellets fall into the ship’s hold.

As we drove south along the lake into the main part of Marquette we came upon another ore dock, this one obviously not in use as there was no train runway leading to it. 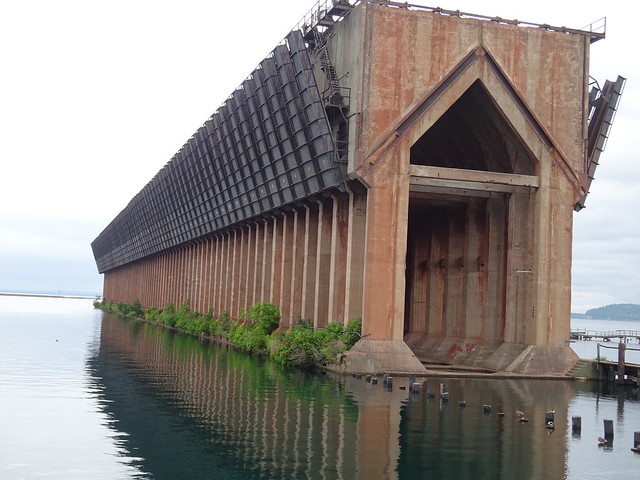 This is the Marquette Ore Dock #6, built in 1931.  The dock’s railroad owner’s went out of business and the dock closed in 1971.  The train trestle approach was removed in the 1990’s and the structure now sits idle among pleasure boat marinas, as there is a legal fight on what to do with it. 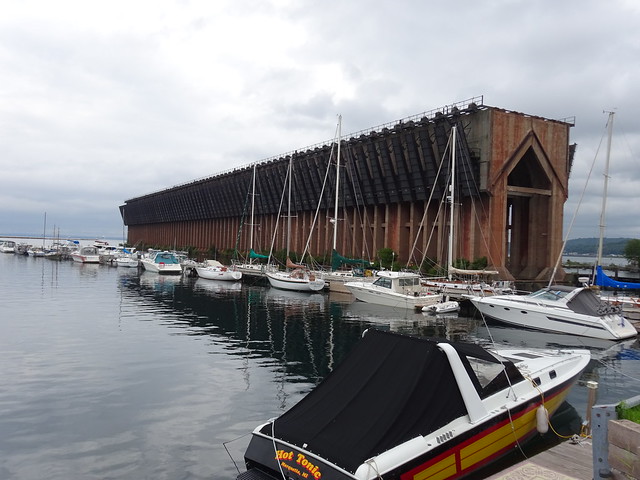 After dinner in the motor home we walked over to the casino to see if the snack bar had anything for dessert (they didn’t).  As we passed one of the slots, John put in a dollar at the penny slot (they don’t call him “The Gambler” for nothing!) and Pam began to push the buttons.  We had no idea what we were doing but faked it as the machine kept whirling.  Only three things identified us as novices in this casino: we aren’t grossly overweight, we are not over 90, and we don’t smoke (that last one is a real giveaway at a casino).  The smoke began to get to us so Pam hit the “cash out” button.  What do you know, she had won $23.65! 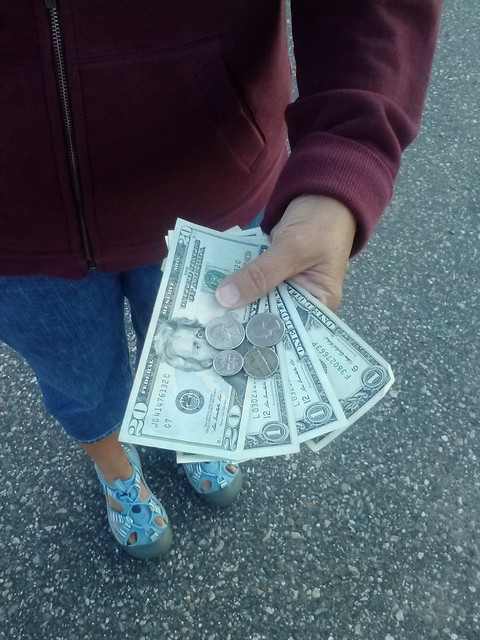 The Pot of Gold!

Now she had the gambling bug!  Another dollar went into the machine and was quickly lost.  Another dollar was inserted and it, too, was quickly gone.  John then dragged her out the door, threatening to call the gambler’s hotline number on the wall!  But this stay has turned out to be a pretty good deal.  Two nights of free electricity and $20!

Tomorrow we continue our westward movement with a 250 mile drive to Duluth, MI where we will spend the next four days.

14 Responses to A Visit to Marquette, MI