After a three night stay near St. Ignace, Monday morning we headed west across the Upper Peninsula of Michigan.  Our target destination was the Ojibwa Casino, a few miles east of Marquette.  The first two thirds of the 150 mile journey was through the center of the UP along Route 28.  The road was flat, tree lined, and pretty much deserted. 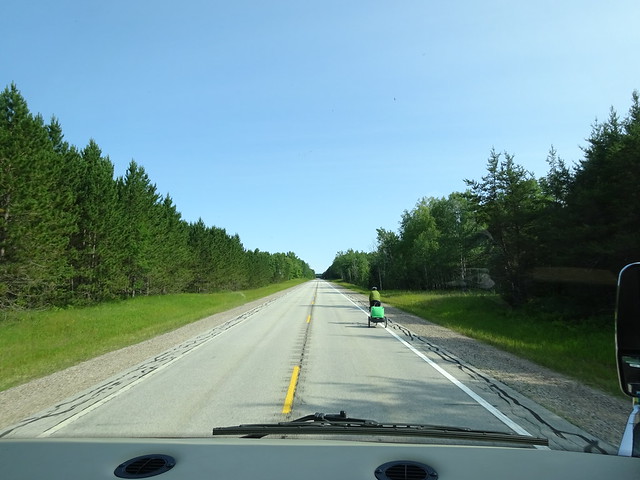 A traffic jam along Route 28

We arrived at the casino a bit after noon and found only two of the seven RV spots were taken.  We quickly set up in one of the available sites (50 amp electric, no water/sewer) and went into the small casino to sign in at the Customer Service Desk.  There is no charge for the RV site and, in fact, they pay you to stay here!  We received a $5 voucher that we could take to the cashier for cash or credit on a player’s card.  Since we really don’t like to sit at a slot machine and push the button we felt a little guilty taking their $5 and electricity without spending money there, so we opted not to cash the voucher.

Since the skies cleared soon after our arrival, we jumped in the Jeep and headed back east about 40 miles to visit Pictured Rocks National Lakeshore.  Pictured Rocks is a U.S. National Lakeshore on the shore of Lake Superior.  It extends for 42 miles along the shore and offers spectacular scenery of the hilly shoreline with various rock formations like natural archways, waterfalls, and sand dunes.

Pictured Rocks derives its name from the 15 miles of colorful sandstone cliffs northeast of the little town of Munising.  The cliffs are up to 200 feet above lake level. They have been naturally sculptured into shallow caves, arches, formations that resemble castle turrets, and human profiles.

Our first stop was the observation decks for a view of Miners Castle, one of the best known features of Pictured Rocks. 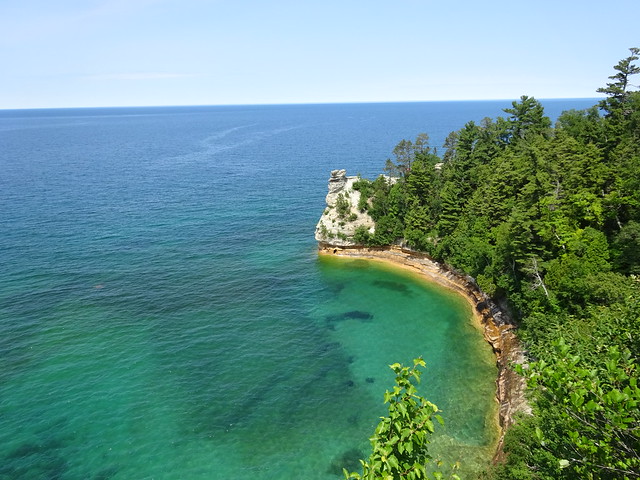 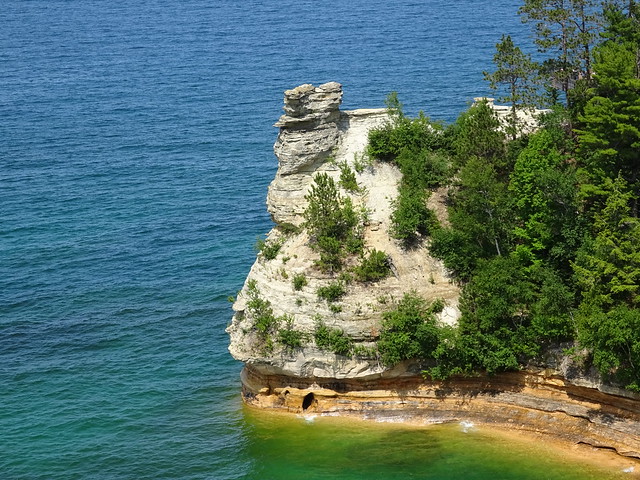 The cliffs are made of sandstone so they are constantly changing.  Miner’s Castle is a good example as it once had two “turrets”, but in 2006 one of them collapsed.  See the small opening at the base of the Castle in the picture above?  A zoom shows it to be a cave that allows water to pass from one side of the Castle to the other. 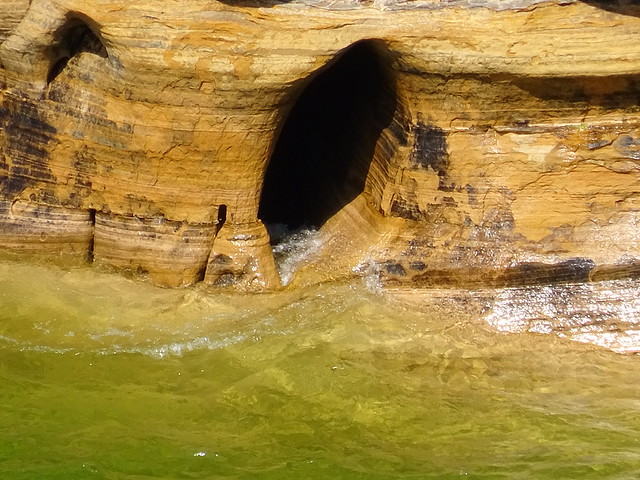 The colors in the cliffs are created by the large amounts of minerals in the rock.  A look directly below us on this observation deck shows some of that color. 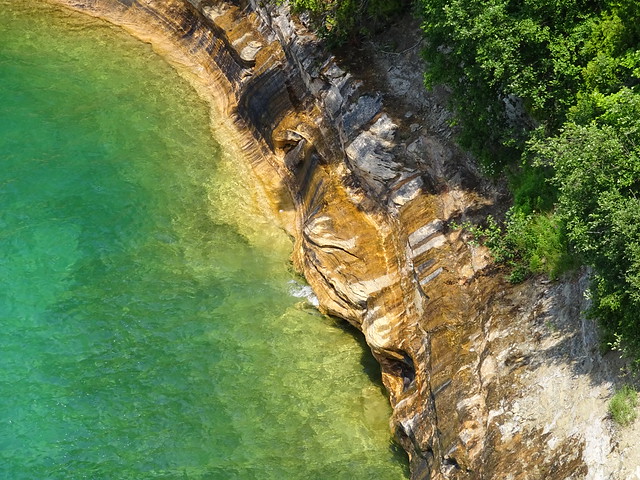 Looking to the north you have a nice view of some of the cliffs.  Tour boats are plentiful as the rocks are best viewed from the water. 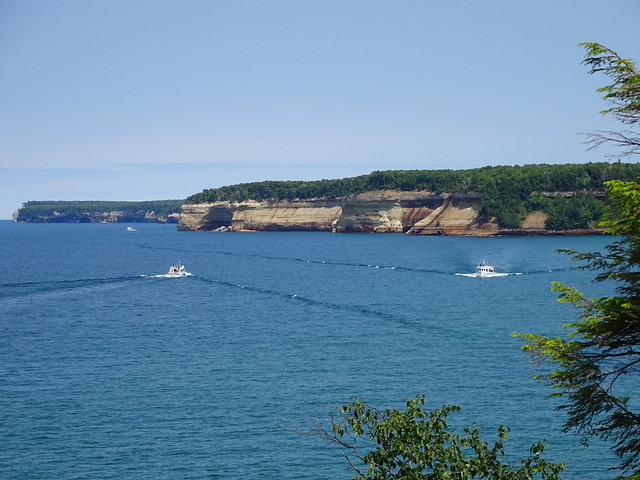 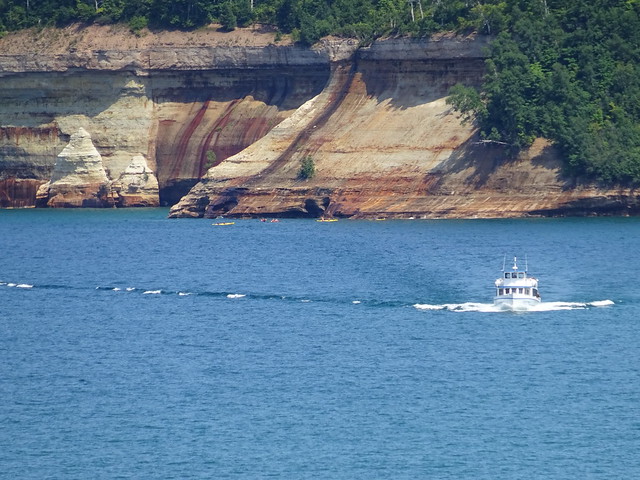 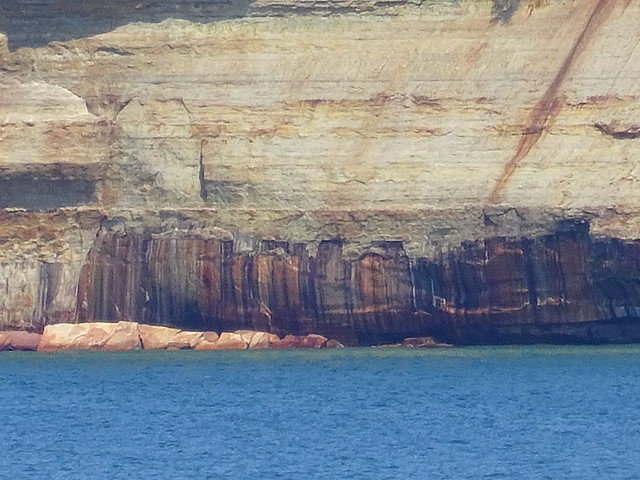 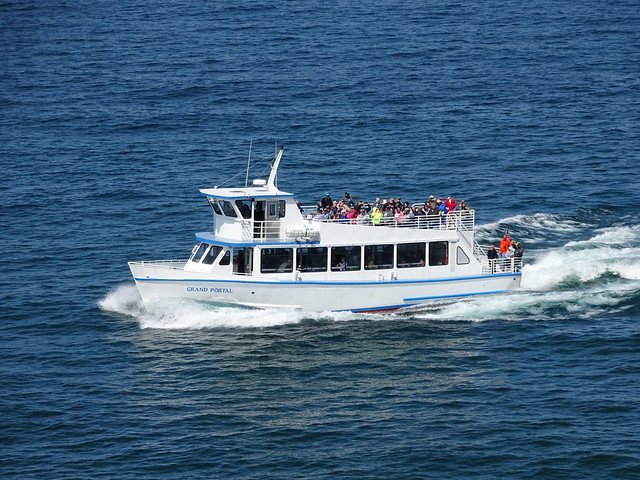 There is a one and a half mile trail from the observation point that leads down to a beach along the lake shore. 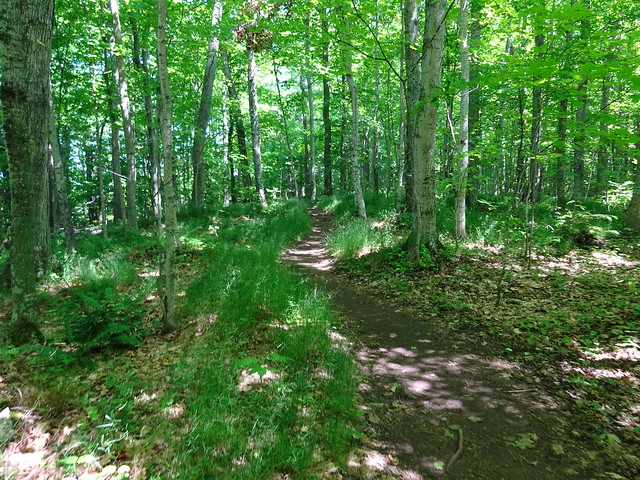 Upper section of the trail to the beach 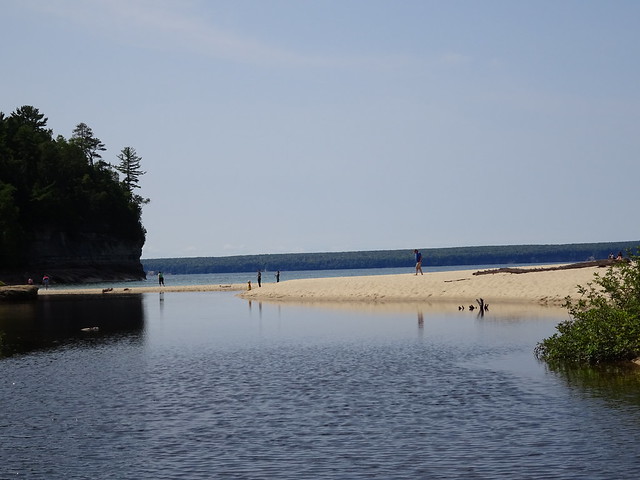 Exiting the trail on to the beach

From the beach you get another view of the cliffs to the north.  Sorry about the picture below.  We didn’t realize that a young couple photo-bombed our picture! 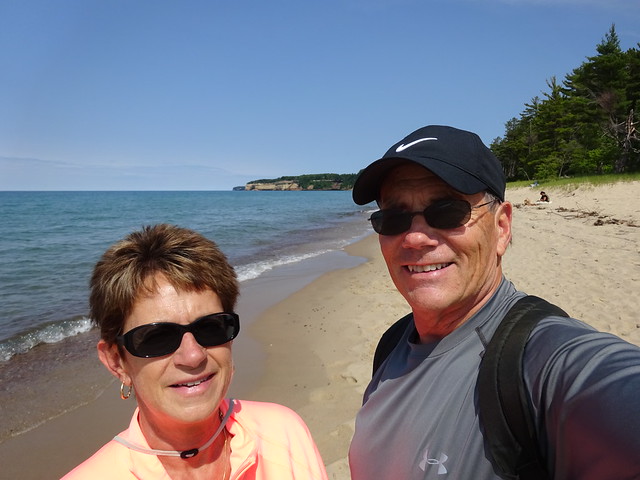 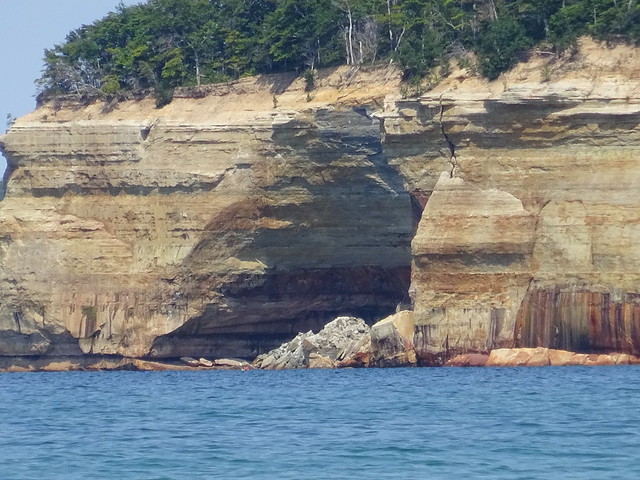 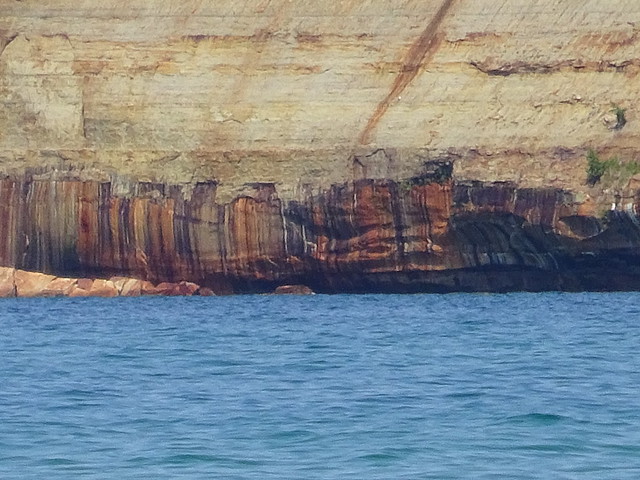 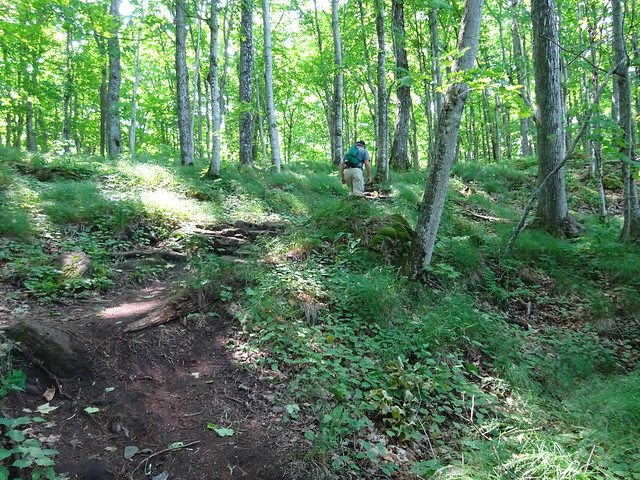 Hiking the trail back from the beach

About a half mile from the observation deck parking area is the trail head to Miners Falls.  Its a short hike (.6 mi.) out to a great view of the falls.  The falls drop about 40 feet over a sandstone outcrop. 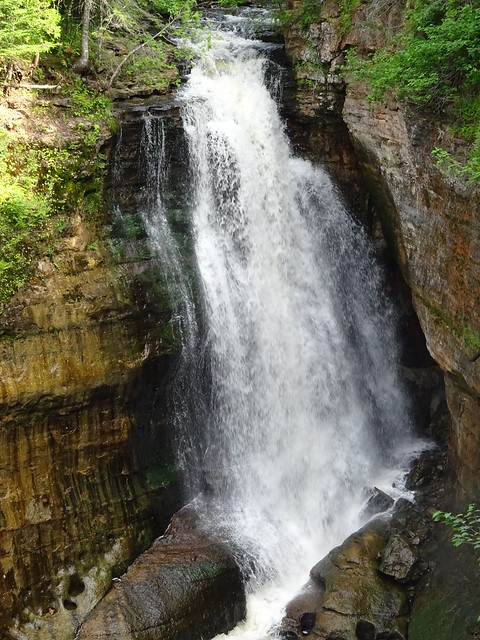 Miners Falls from the observation deck

The falls from below 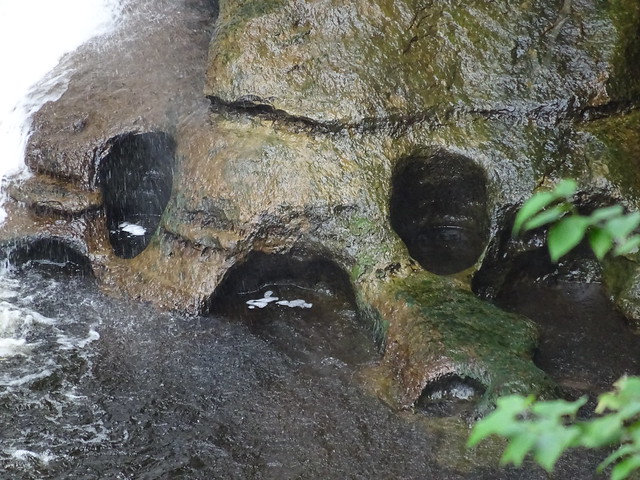 Pothole formations at the base of the falls

On our way back through the little town of Munising we noticed the junior-senior high school building.  From the road it looks a bit like a bunker but . . . 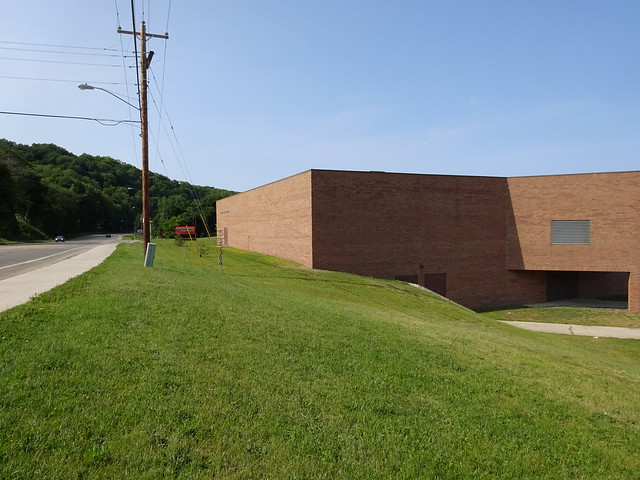 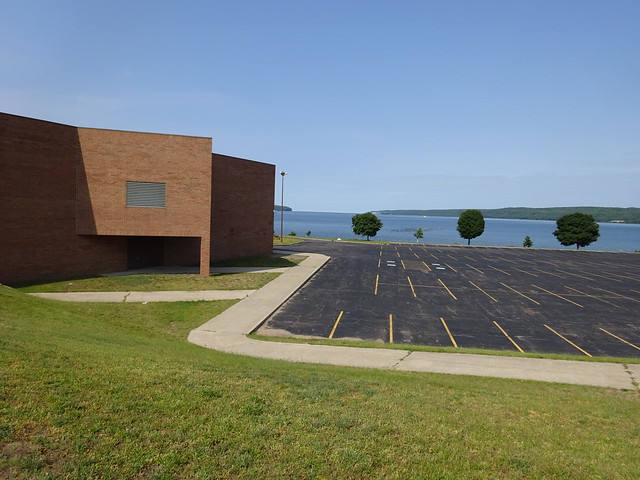 Tomorrow we plan to visit the nearby city of Marquette.  More on that later . . .