The small village of Empire is right on the shores of beautiful Lake Michigan just south of Sleeping Bear Dunes National Lakeshore.  We have taken advantage of our unscheduled visit by taking a short hike one day and a 23 mile bike ride the other.

The short hike was on the Empire Bluff Trail, just south of the village.  The trail is only a mile and a half round trip, but leads to a  great view of the shoreline of Lake Michigan. 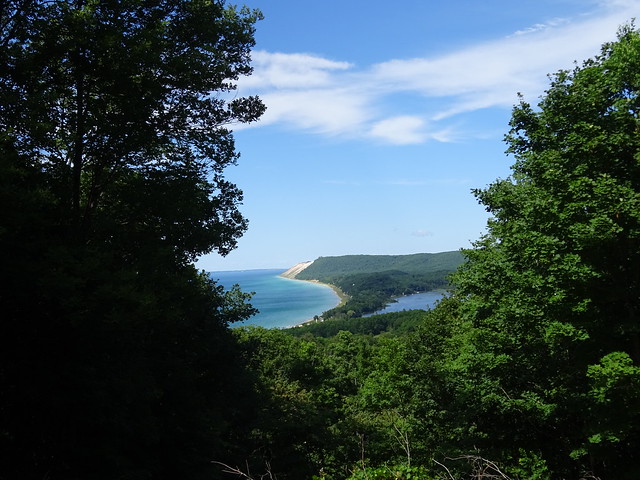 As we approached the bluff, a great view emerged on our right 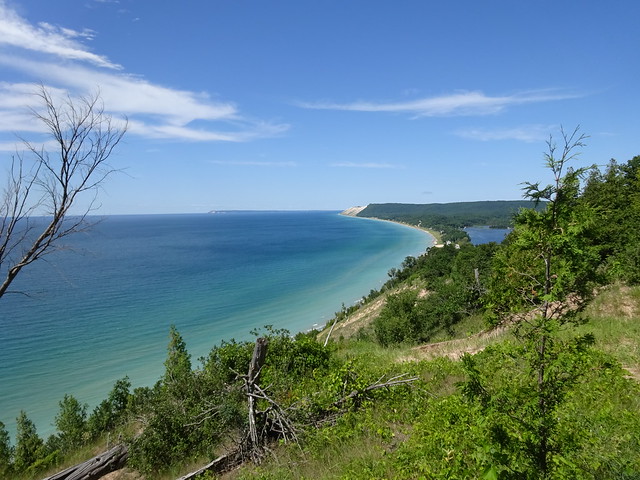 The next day we took advantage of some great weather and rode the Sleeping Bear Heritage Trail from Empire to Glen Arbor, a little over eleven miles to the north. 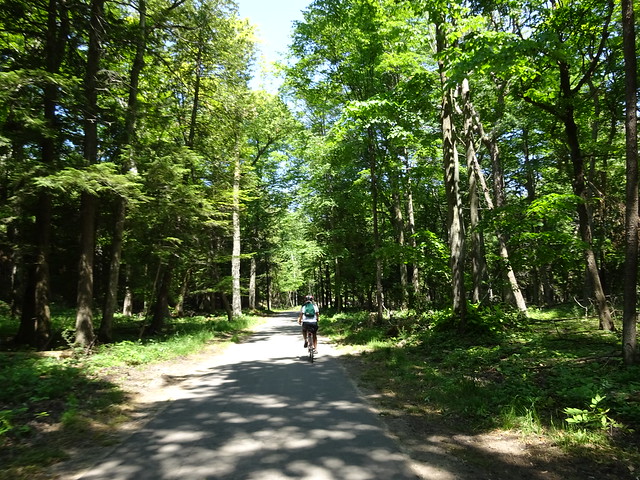 The paved trail meanders through woods and open fields

A bit over seven miles on the trail we came to the parking area for the Sleeping Bear Dune Climb.  The part of the trail we just rode recently opened in June.  Before that, the Dune Climb parking lot was the southern end of the trail. 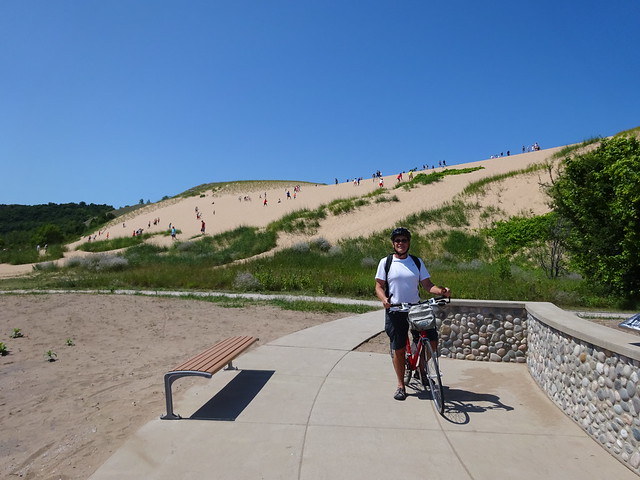 About three miles north of the Dune Climb we came to the former logging and canning community of Glen Haven. 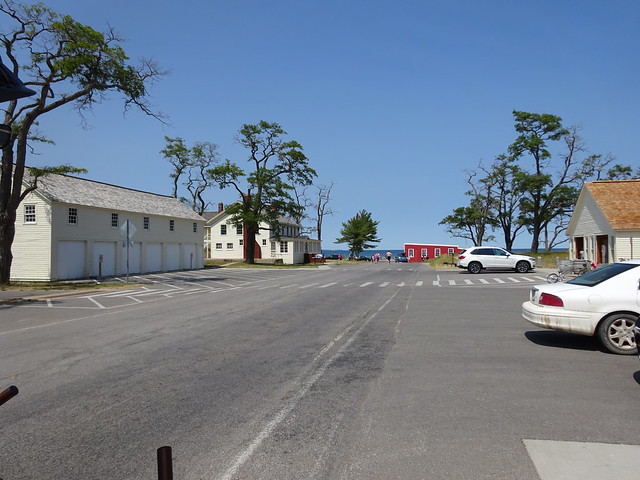 The main (and only) street of Glen Haven

During the second half of the 1800s Glen Haven was a busy place.  The picture below is a close up of a display board located along the lake front.  In it you can see a dock with a rail car on it and a large steamer arriving at the dock.  The train brought lumber from a few miles away to the dock, where it was loaded on to the steamers. 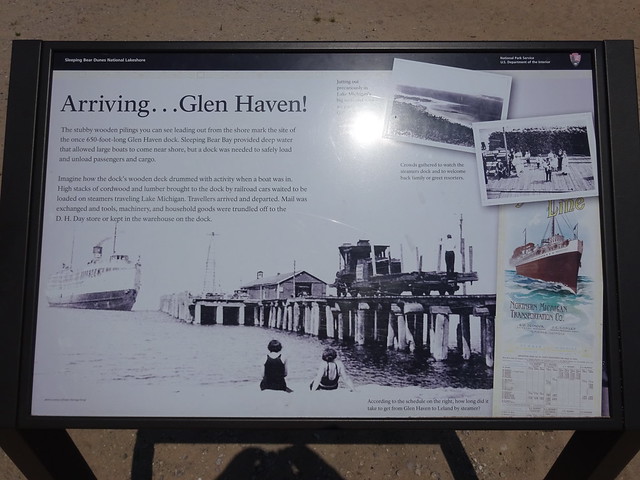 There are still a few pilings out in the lake (marked by the arrow below) that show just how far out into the lake the dock ran. 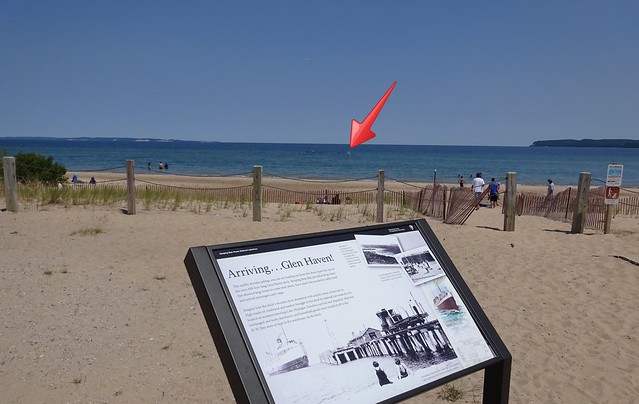 Turn around from the lake front and you are looking at a restored red building, the former home of the Glen Haven Canning Company.  When the lumber business began to fade in the 1920s, the mill owner diversified into growing and canning fruit grown, especially cherries. 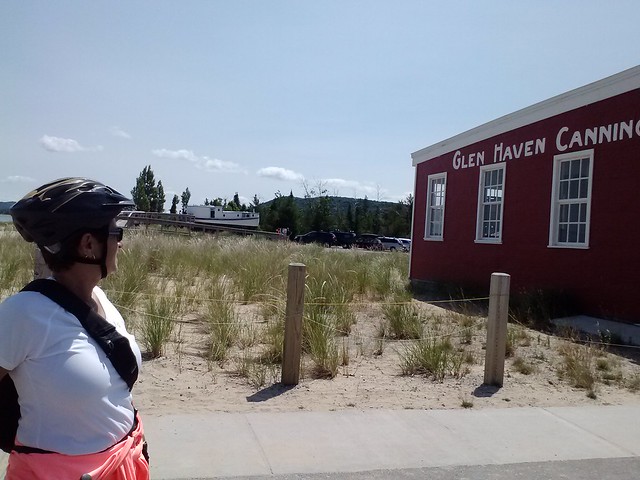 The cannery went out of business and other ventures didn’t fair much better so the town slowly declined.  In the 1970s the National Park Service purchased the land and incorporated it into the Sleeping Bear National Lakeshore.  Many of the buildings have been restored, like the old cannery building which houses a display of old boats.

About two miles further up the trail is the little touristy town of Glen Arbor.  This part of Michigan is known for growing cherries, so it is not surprising that one of the most frequently visited places in the village is the Cherry Republic.  There are three buildings in the small complex: a retail store (Great Hall of the Republic), a tasting building, and a small restaurant. 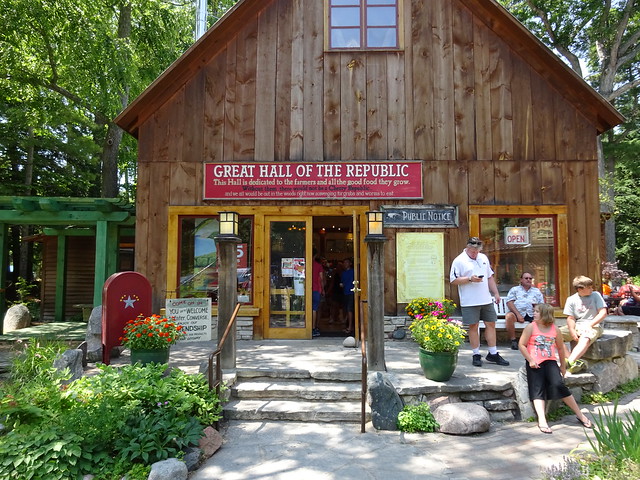 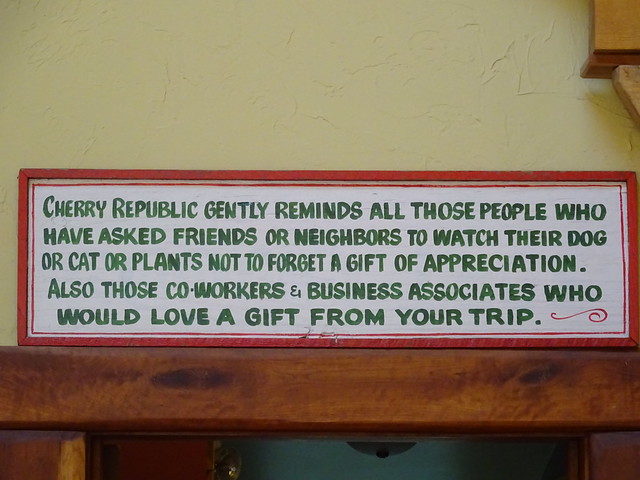 Outside the Great Hall of the Republic is a bit of a strange display, the rear end of a car attached to a wall.  Cherry Republic began in 1989 with a young guy selling t-shirts and Cherry Boomchunka cookies from the trunk of his car.  As a way to remember the company’s humble beginnings they chopped off that trunk and put it on display! 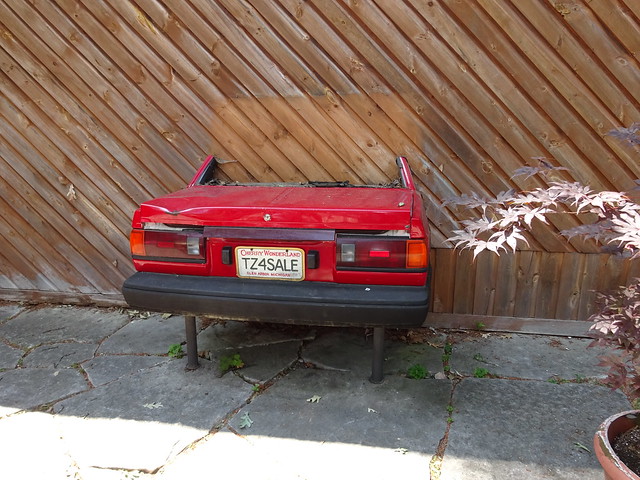 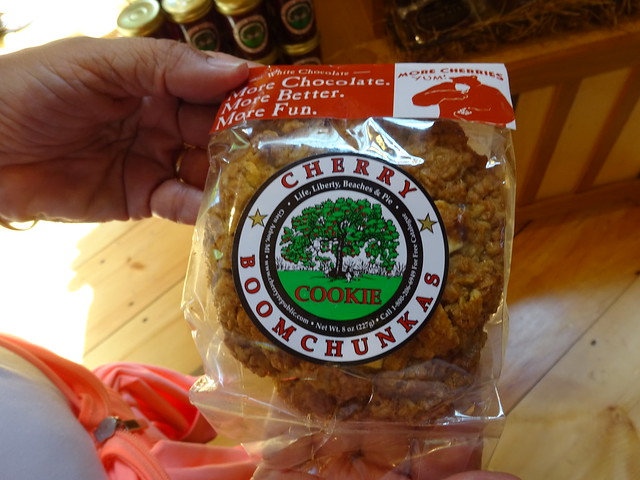 Right next to the gift shop is the tasting building where you can sample wines and sodas made from, you guessed it, cherries. 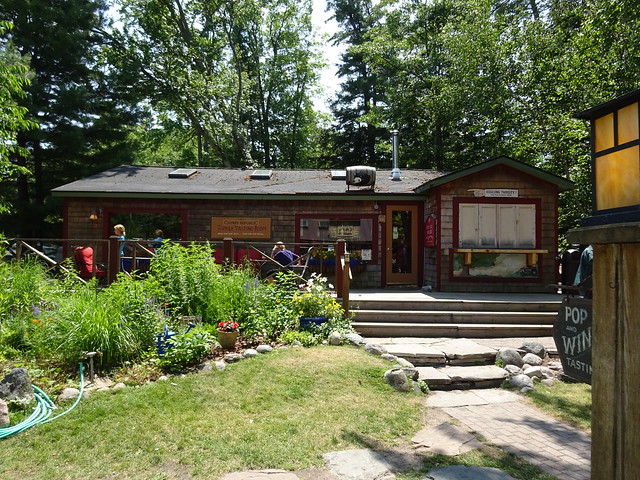 The line was a bit too long in the tasting room so we walked around it to the other side where we found an interesting competitive sports facility, the Cherry Pit Spitting Arena.  Who knew! 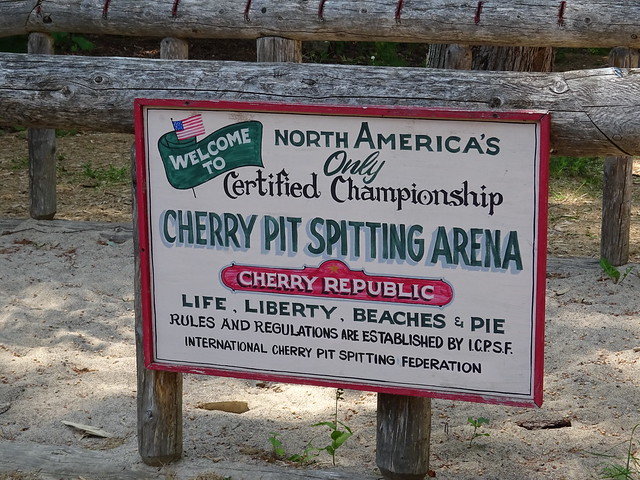 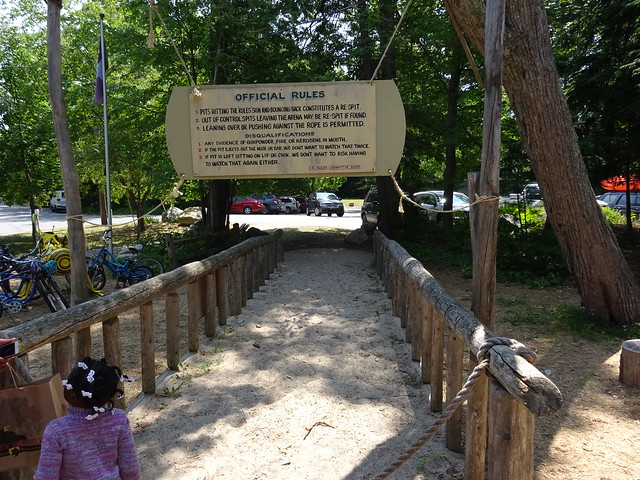 The official rules are simple but very practical. 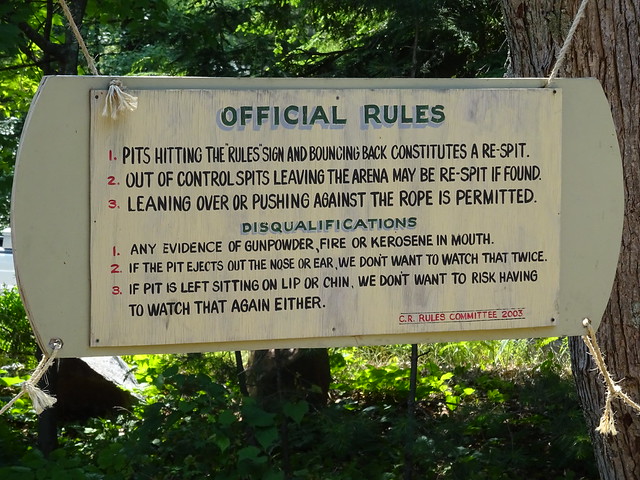 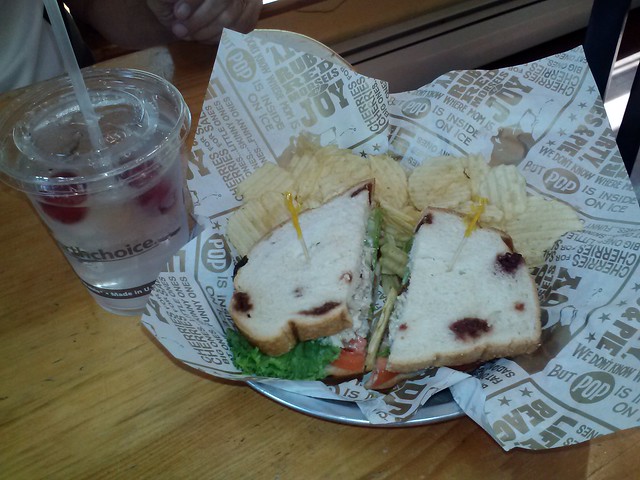 And so ends our brief side trip to the Sleeping Bear Dunes area.  Tomorrow we pull in the slides, raise the levelers, fire up the diesel and head about a hundred and fifty miles north to the Upper Peninsula of Michigan.  Our plan is to stay overnight just across the Mackinac Bridge in the town of St. Ignace.