When we last blogged a few weeks ago, we had just ended a great month on Dave and Sue’s lot next to beautiful Conesus Lake just south of Rochester.  From there we drove about a hundred and fifty miles north to the village of Clayton, along the Thousand Islands region of the St. Lawrence River.  We go there every summer to visit Pam’s mother, Fran, and to do a few odd jobs around the house for her.  While there, we park the motorhome in an unused drive of a friend of Fran’s, John Eppolito.  It is just around the corner from Fran’s, so we spend most of our time at her house but are able to sleep in our own bed each night! 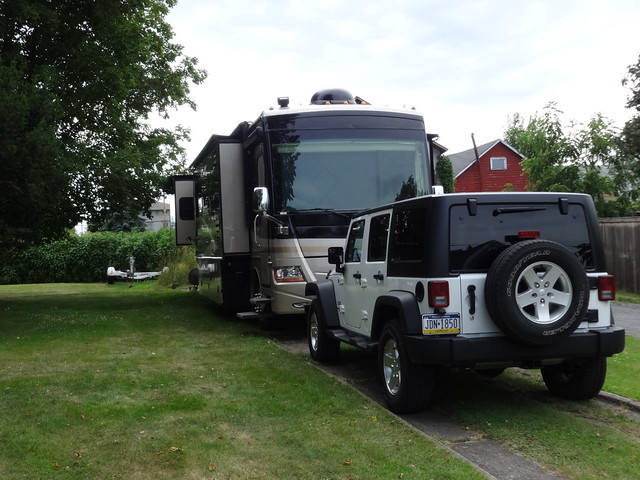 The Eppolito RV Park (no frills)

This year we wanted to be there to attend a high school graduation party for our niece Daniela, Pam’s sister’s daughter. 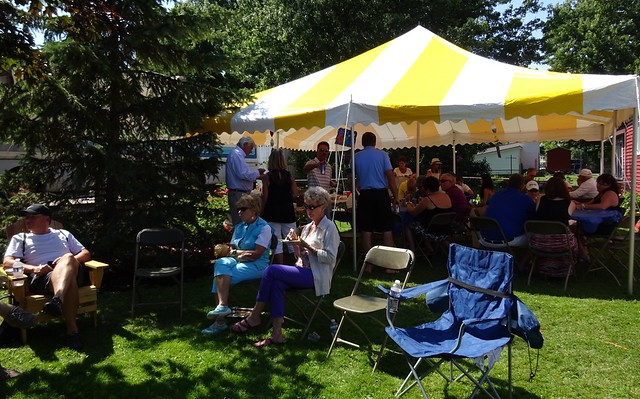 The party begins (Pam’s mom is seated in the center) 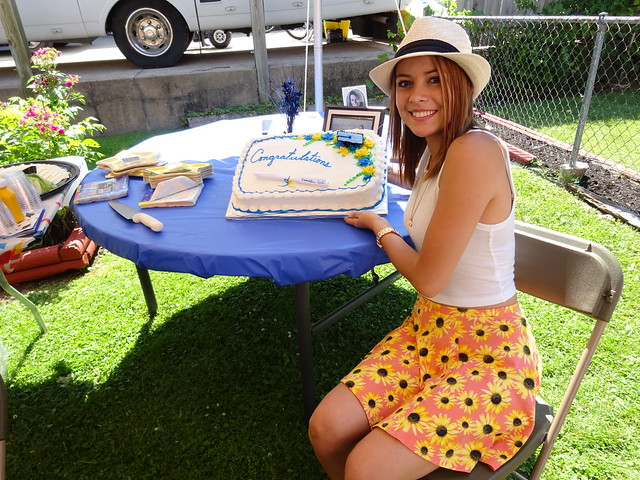 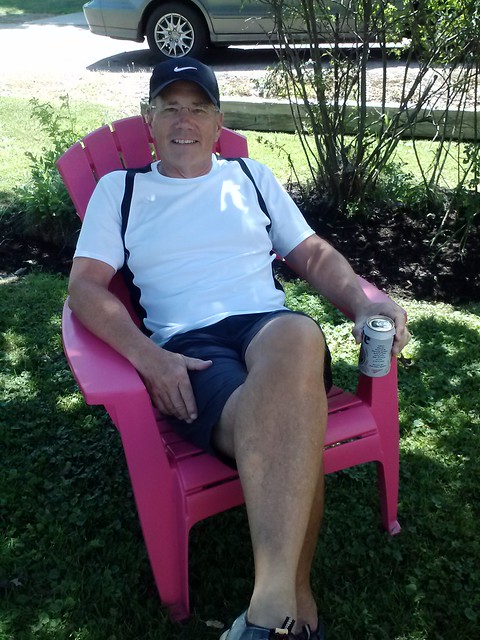 It takes a confident man to sit in a pink chair

In between polishing a car, cleaning windows, and completing some general repairs, we managed to get in a couple of side trips.  The first was a hike around the west end of nearby Wellesley Island.   Access to the island is done by crossing the Thousand Island Bridge on I-81.

A little out of focus, but you get the idea (picture borrowed from the web)

The trail is in the Thousand Islands State Park and begins at the nature center.  While not exactly hiking the Rockies, it does have some pretty good ups and downs . . . 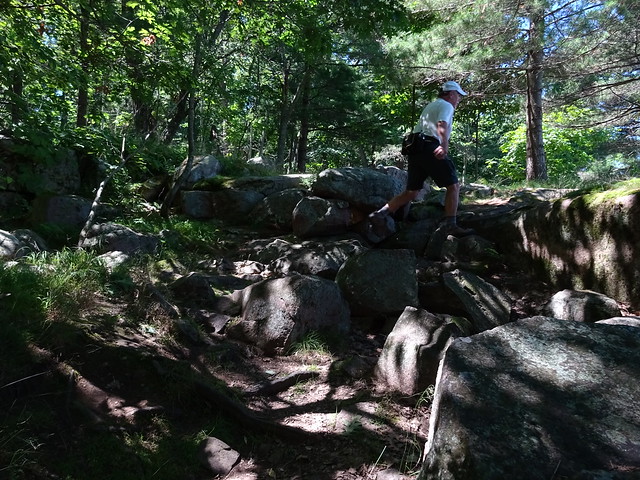 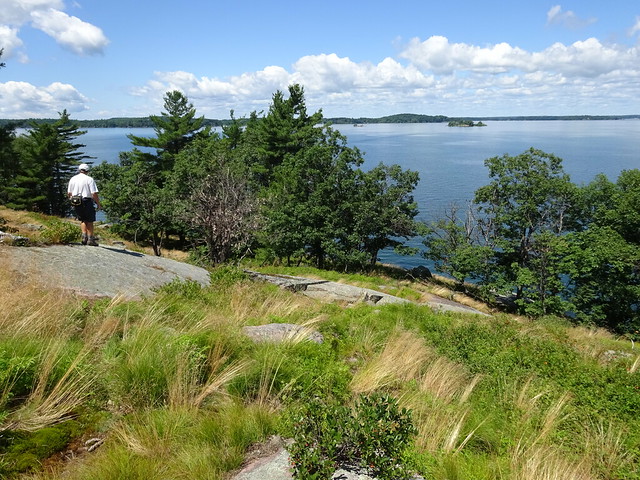 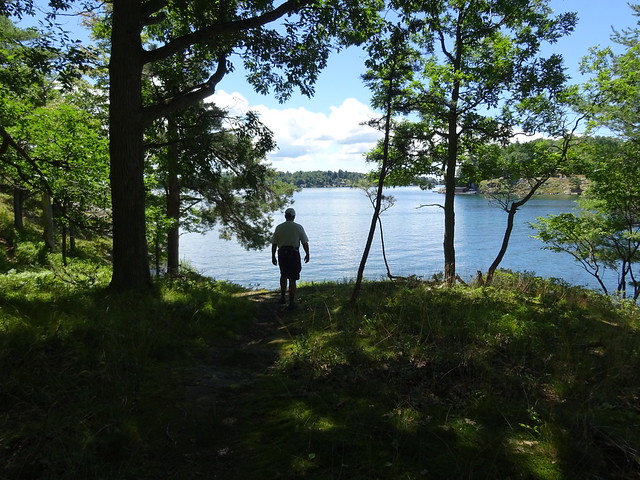 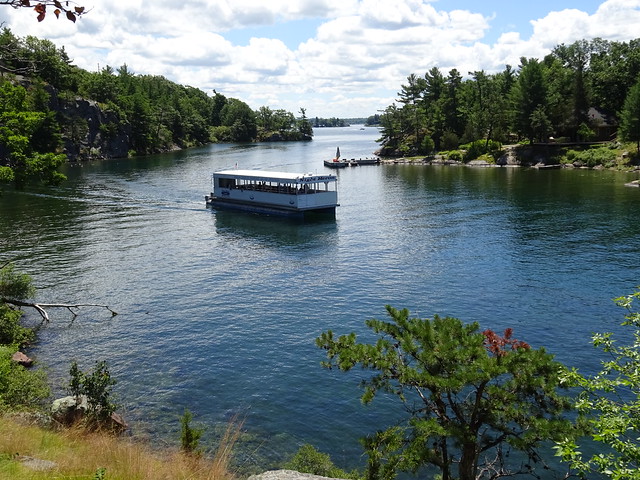 The Clayton Tour Boat in “the Narrows”

On another beautiful day we did our annual international bike trip to Kingston, Ontario.  To get to Kingston we drove the Jeep about ten miles to the west along the river to the tiny village of Cape Vincent.  There we hopped a small private ferry for the short (15 minutes) ride to Wolfe Island ($2/person), owned by Canada. 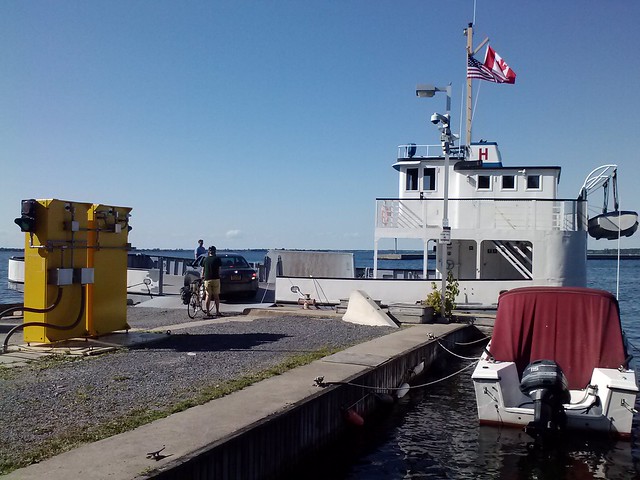 Once we cleared Canadian customs it is an eight mile ride across the island through beautiful farm fields. 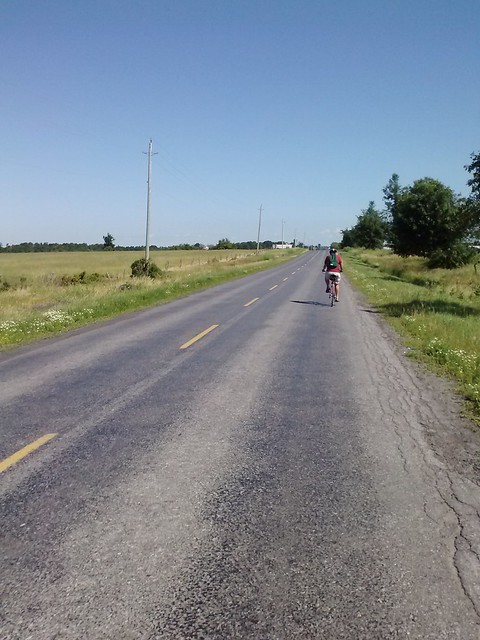 At the little village of Marysville we boarded a free ferry to the mainland. 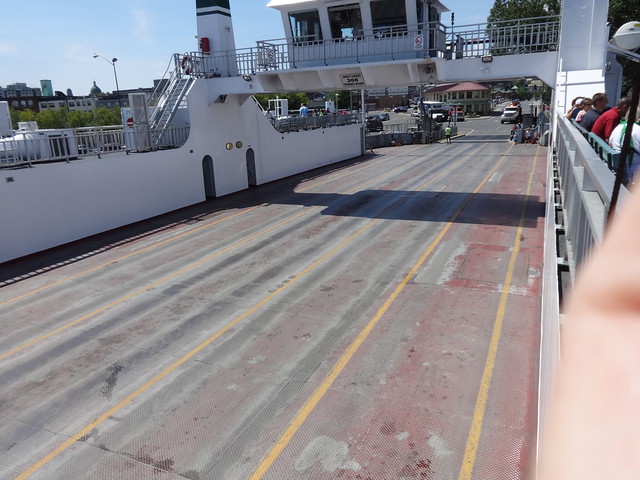 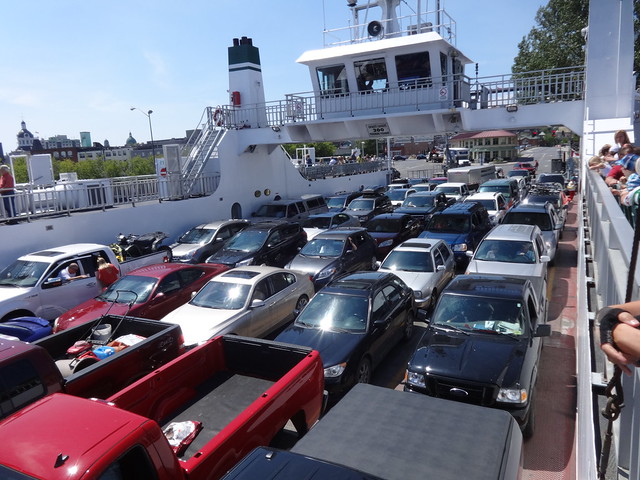 After two weeks we feel the need to get back on the road again.  Since returning from our trip west last August we have spent the past year basically returning to places where we had previously stayed (Clayton, York, Atlanta, Myrtle Beach, etc.).  We’re now anxious to head west again to explore new territory.  So on Monday we were up early and headed out.  While we do want to head “west” the first leg of our journey was to the “east” as we headed to the Thousand Islands Bridge to cross into Canada.  The bridge helps get the old heart rate up for the trip as it is a bit narrow and steep! 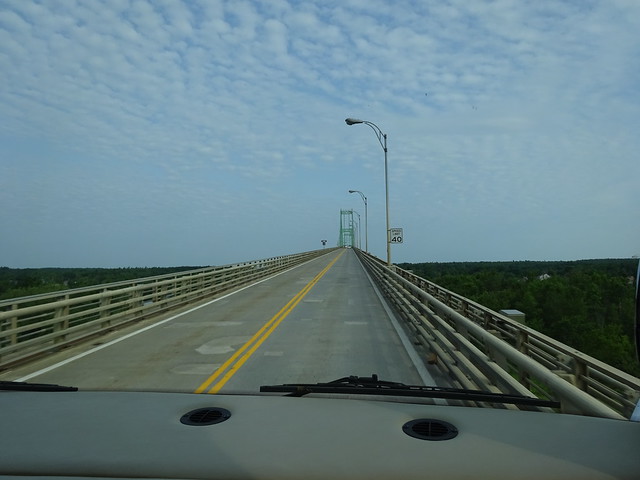 Our “long term” goal is to go up into the Canadian Rockies and visit Jasper and Banff National Parks.  To get there we’ve decided to meander along US-2 through Michigan, Wisconsin, North Dakota, and Montana.  US-2 begins just over the Mackinac Bridge on the Upper Peninsula.  So the shortest route from Clayton to Michigan is to take Highway 401 through Ontario.  On Monday we crossed into Ontario and drove about 370 miles to Wyoming, ON, where we stopped at a nice RV park just off the highway.  Early the next morning we drove about twenty miles more  before crossing back into the US at the Sarnia/Port Huron bridge.  Then it was north on I-75 to the Mackinac Bridge where we planned to stay at a casino in St. Ignace.

But wait!  Why should a couple living in a house on wheels follow a set plan?  As we drove north on I-75, Pam mentioned a great resort we visited during our first year of full-timing twenty miles west of Traverse City along Lake Michigan.  As we talked about what a nice park it was, the idea arose to see if they had a spot available.  Sure enough, a quick phone call and we had a reservation.  So a few miles more on the interstate, then we turned to the west and headed for Indigo Bluffs, near Empire, MI. 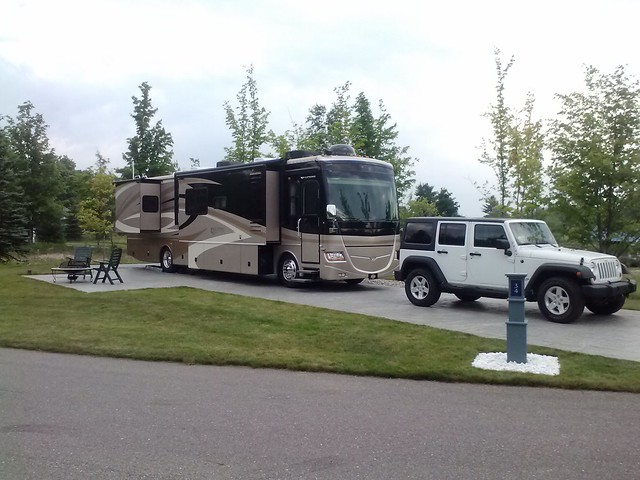 We booked the above site for three nights, then we’ll continue our journey to the Mackinac Bridge and the Upper Peninsula.  Or maybe not, depending on how we feel.  It’s a tough life, but somebody has to lead it!

Let’s close this post with a couple of shots of the sun setting over the Thousand Islands. 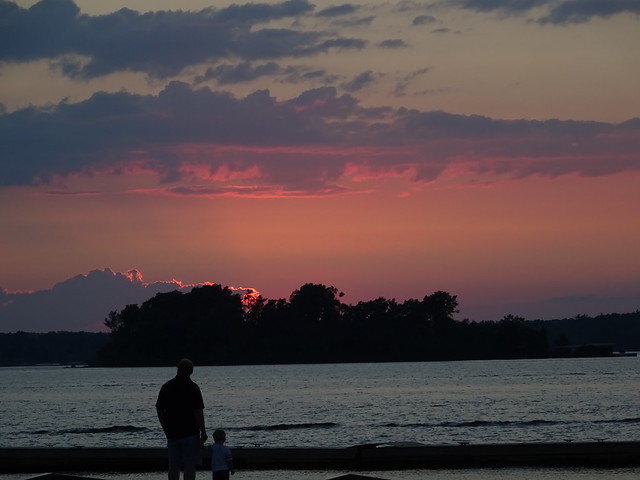 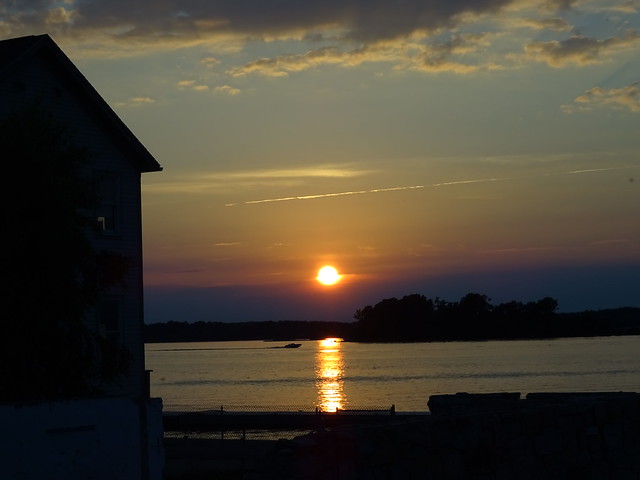 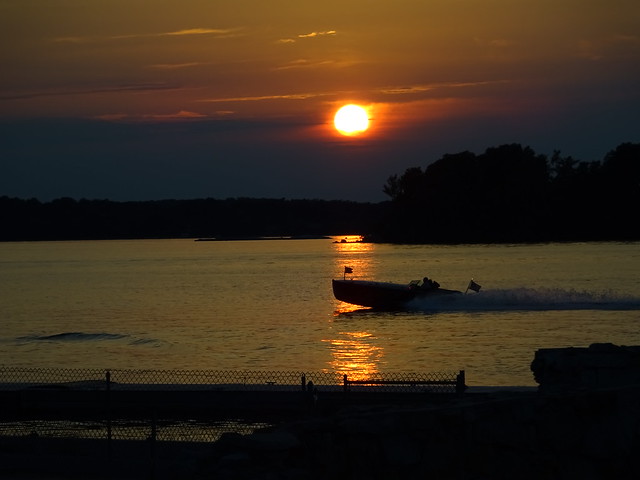