The Ring of Fire

When we arrived at Dave and Sue’s beautiful site along Conesus Lake way back on June 1st, we intended to stay for two or three days.  Dave described a neat activity along the lake they call the Ring of Fire that takes place “on the third.”  We said that was great as it was only two days away so we would be there to see it.  Dave said it was not held on June third, but on July third.  That’s a month away, we told him!  But when they invited us to stay longer and Mr. David’s Sewer Pump Installation Service arrived the next day to get the sewer working, we began to re-think our stay.  A full hook up site along a beautiful lake!  Great local guides to show us the area!  A golf course nearby!  A Starbucks in  the nearby college (SUNY Geneseo)!  Are you serious!  We’re in ! ! !

The month quickly passed and the third of July soon arrived.  Now it was time for the famous “Ring of Fire.”  That night tradition says that everyone around the shores of Conesus Lake builds a bonfire to be lit at dark. 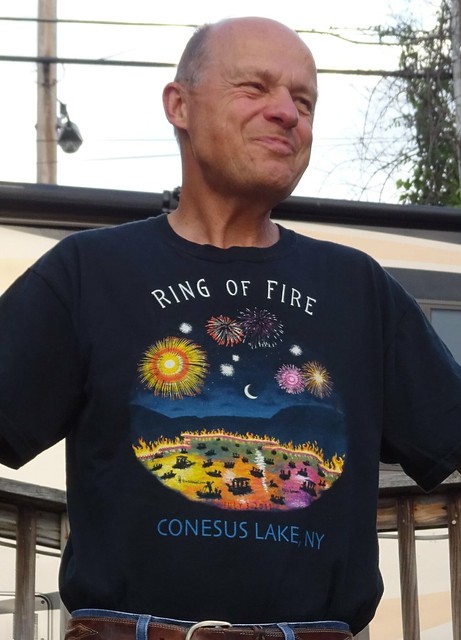 Wow, they even sell shirts for this shindig!

Apparently  in past celebrations Dave took great pride himself in building one of the largest fires in the area.  Although maybe not up to those past standards, he said he would bring some wood down the morning of the 3rd for a small (for him) blaze.  Sure enough, he arrived bright and early (ok, we’re retired – early is around noon!). 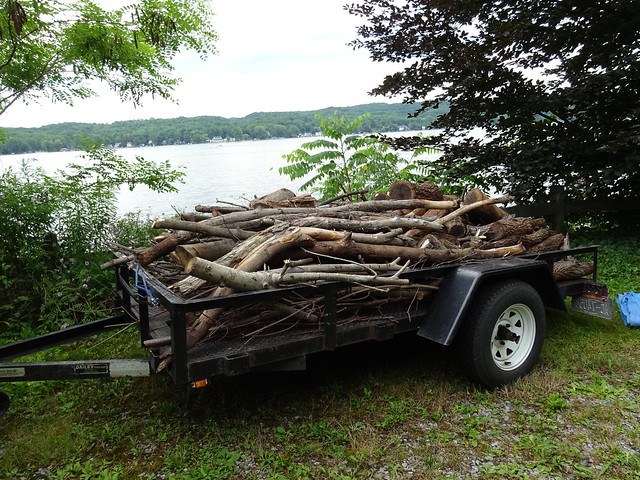 John helped Dave unload the wood, which they threw down the bank to the lawn next to the lake.  One large piece had a mind of its own and rolled across the lawn, over the break wall,  into the lake.  Of course, the log couldn’t drift back to shore, instead  it headed out toward deeper water.  Dave was afraid a boat might hit it, so he sent his trusted assistant in to the water to fetch the wayward log. 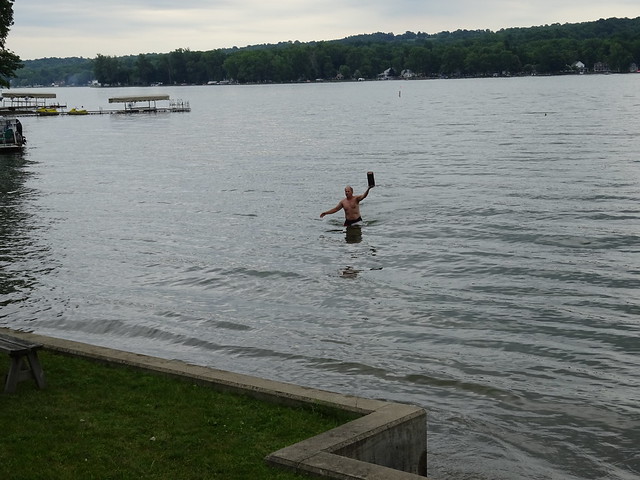 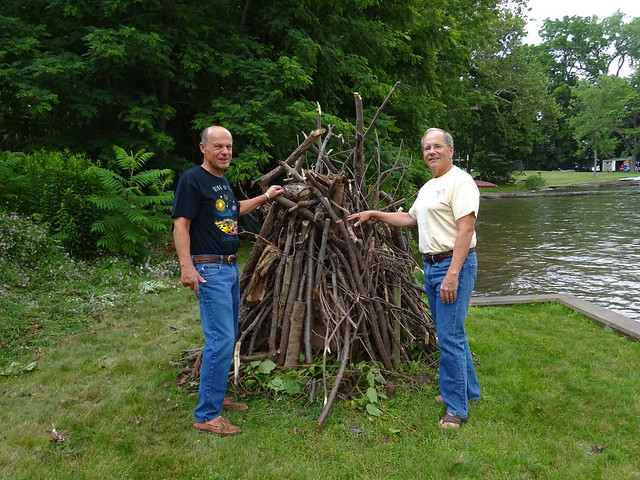 The boss and his helper, Igor, survey the final structure 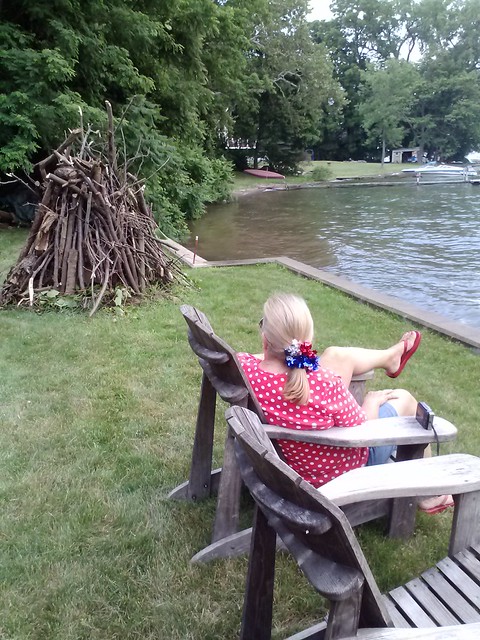 Proper supervision is the key to a successful project

This bonfire stuff is not Dave’s first rodeo.  He knows that if you wait until it is dark to light the fire,  it will not produce good hot coals for toasting marshmallows until you are ready to go home.  So a bit less than an hour before dark he set the pile ablaze. 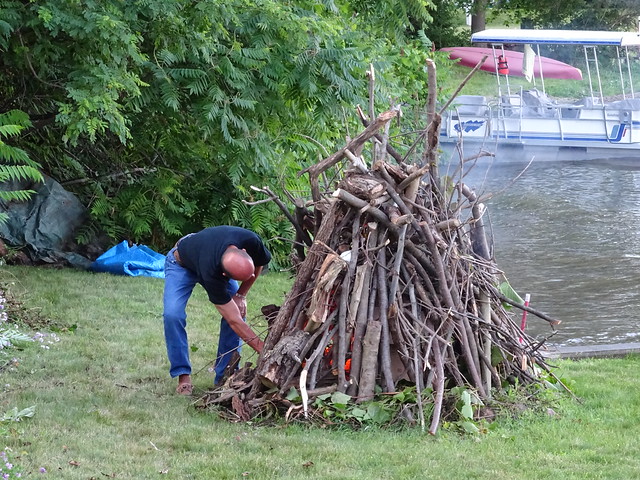 Flames quickly rise up from the kindling in the middle of the pile. 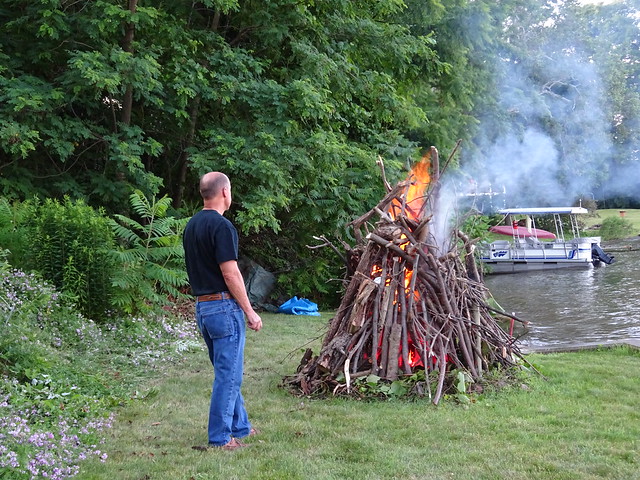 Soon it is a rip roaring inferno! 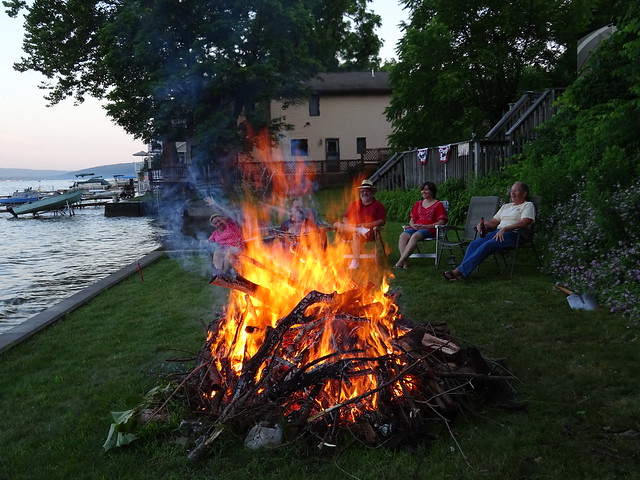 At dusk the fireworks begin across the lake from us. 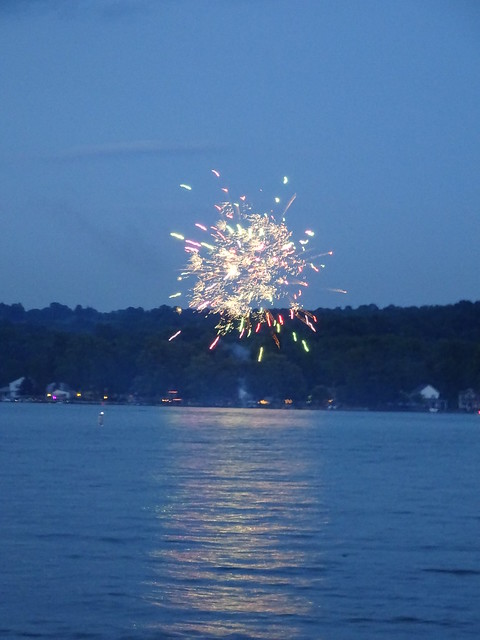 These people must have spent a few bucks on fireworks as they continued to shoot them off for hours! 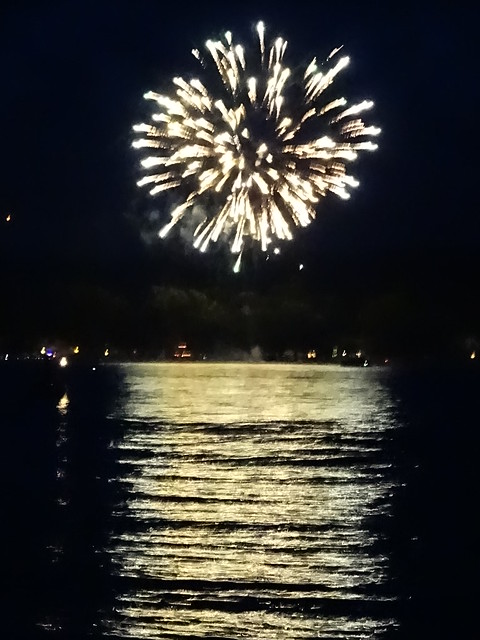 The activity is called the “Ring of Fire” because at a designated time everyone lights flares along the shoreline on their property, creating a “ring” around the lake.  At the appointed hour (10 p.m.) John helped Dave light up the many flares Dave had set up earlier in the day. 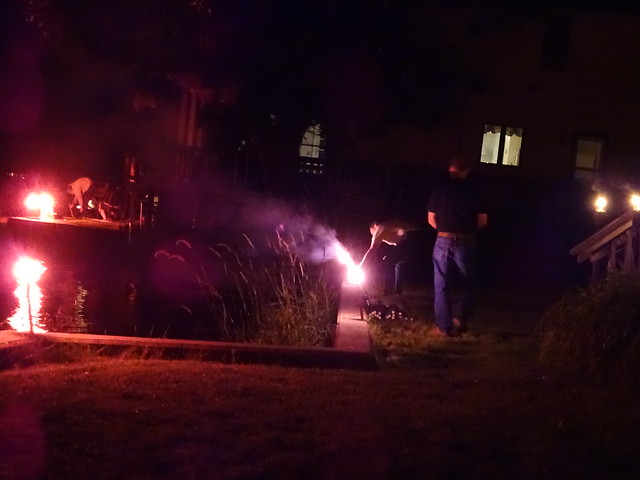 The effect of the flares was spectacular!

While the flares put on their show, we settled in to the time honored tradition for enjoying a bonfire: S’mores! 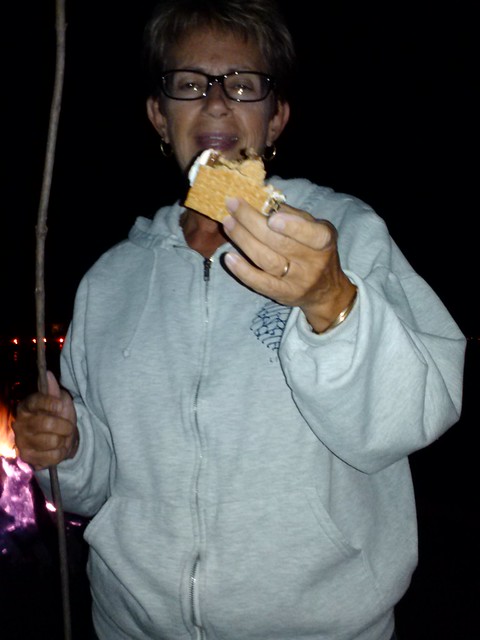 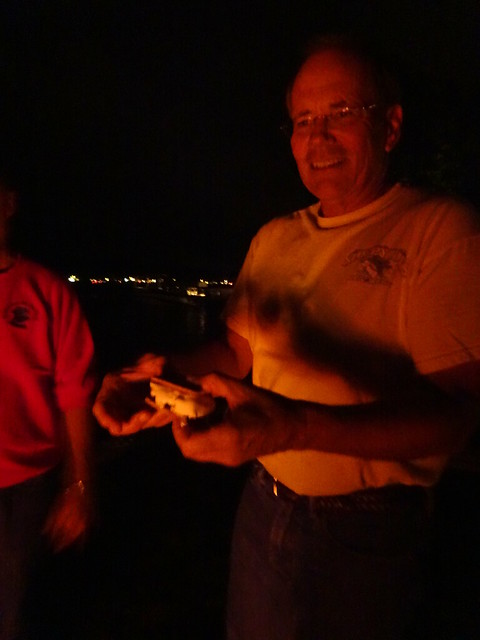 We sat out until almost midnight enjoying the many firework displays up and down the lake. 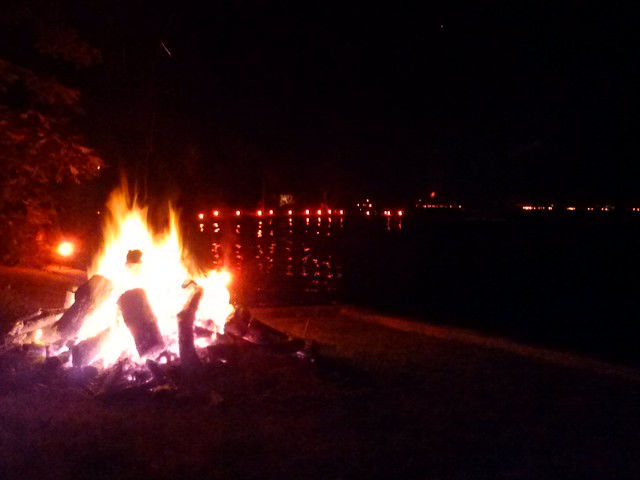 The next evening Dave made another fire from the still hot coals and we enjoyed a final dinner by the lake.  Although it was the Fourth of July, things were much quieter than the previous night!

Benjamin Franklin once said “Guests, like fish, begin to smell after three days.”  Wow, we must really stink!  Its now time to end our great stay along the banks of Conesus Lake.  So Saturday morning  we fired up the motorhome and headed north about 150 miles to the banks of the St. Lawrence River.  Pam’s mother and sister live in the village of Clayton in the Thousand Islands.  Her sister’s daughter just graduated from high school and they are having a party Sunday afternoon to celebrate, so we need to be there.

Thanks so much to Dave and Sue (Buluga’s Great Adventure) for your great hospitality!  We will miss you and the dogs (Sasha and Lewis) but know we’ll see you soon somewhere in our travels (San Diego this winter ? ?).

36 Responses to The Ring of Fire