Dave and Sue both grew up (many years ago) in the Buffalo, NY area and often visited the Niagara Falls area.  Recently they invited us to a day trip to Niagara-on-the-Lake, Ontario,  a quaint little touristy village along the shore of Lake Ontario where the Niagara River empties into the lake.

From Geneseo, Dave took us on a scenic route that lead through the beautiful farm land of western New York just south of Lake Ontario.  After about two hours we entered Canada by crossing the Lewiston-Queenston Bridge, one of three bridges that span the Niagara River as it flows 35 miles north from Lake Erie to Lake Ontario.  Once in Canada it is only a short drive north to Niagara-on-the-Lake.  We parked next to the Niagara-on-the-Lake Golf Course where we enjoyed lunch with a great view of the Niagara River emptying into Lake Ontario, with the US visible across the water.

This beautiful little nine hole course claims to be the oldest surviving golf course in North America, with play beginning in 1875.  Dave played it a few years after it opened and says it hasn’t changed much since then.  As we proceeded through the parking area John couldn’t help but admire the beautiful MGB pictured below.  He owned a similar vehicle (painted British Racing Green) when he first met Pam.  Two year after we were married, we traded the MGB for a baby boy!

A short walk from the golf course is the main area of the town.  This place is a paradise for those who love flowers.  Most of the houses in the residential areas have beautiful gardens and the main street of town is filled with well-manicured flower gardens. 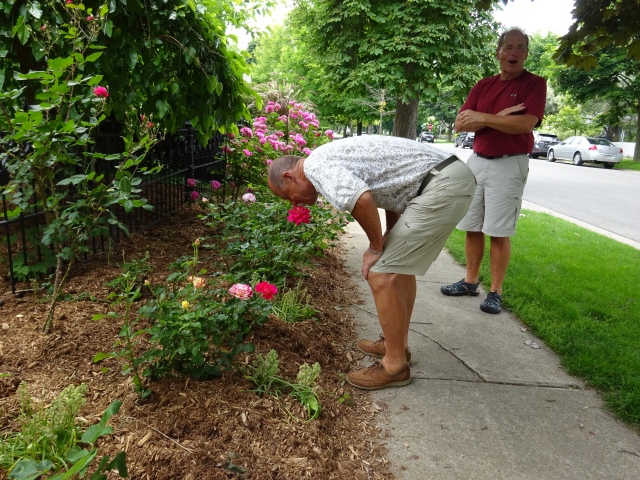 Some people still stop to smell the roses!

The Shaw Cafe and Wine Bar, pictured below, is a good example of the colorful flowers along the main street.  The cafe takes its name from biggest event of the year in Niagara-on-the-Lake, the Shaw Festival. 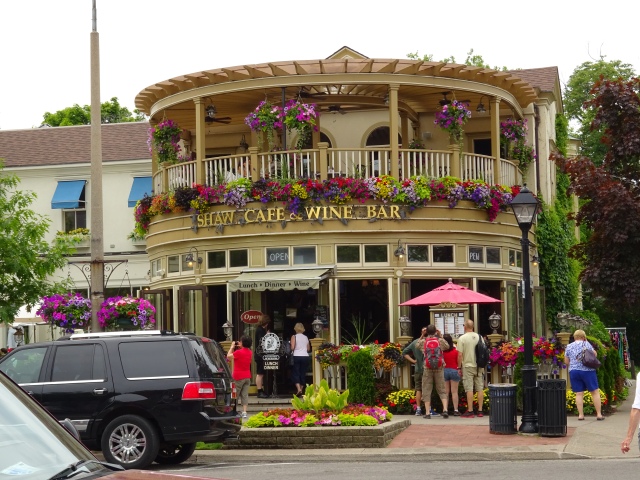 The Shaw Festival is a major Canadian theater festival,  sponsored by the Shaw Festival Theater Company, the second largest repertory theater company in North America.  Founded in 1962, its original mandate was to stimulate interest in George Bernard Shaw and his period, and to advance the development of theater arts in Canada. 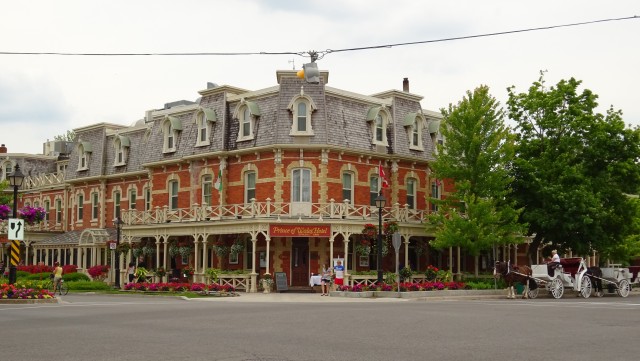 Just up the street from the Shaw Cafe is the famous Prince of Wales Hotel.  Built in 1864, the three story 110 room hotel went by several names (Long’s Hotel, Arcade Hotel, The Niagara House) and was renamed after famous guests, Duke of York (and Prince of Wales) and the Duchess of York, in 1901.  Queen Elizabeth II stayed at the hotel during her visit to the area in 1973.

After a walk through Niagara-on-the-Lake we drove south along the Niagara River, stopping at a viewing area to check out a view of the Lewiston-Queenston Bridge and the Robert Moses Niagara Hydroelectric Power Station.

The Robert Moses Niagara Hydroelectric Power Station is a hydroelectric power station.  The plant diverts water from the Niagara River above Niagara Falls and returns the water into the lower portion of the river near Lake Ontario. It utilizes 13 generators at an installed capacity of 2,525 megawatts.  Canada has a similar power station that is almost directly across from the Moses Plant.

We continued our drive along the river and soon entered the city of Niagara Falls, ON.  After parking the car we walked a short distance to the river where we were treated to a great view of the falls.

Two Americans with the American Falls in the background

Dave and Sue check out the Canadian Falls

If you have ever visited Niagara Falls, chances are you took a ride on the Maid of the Mist.  With its iconic blue raincoats, the Maid of the Mist has enjoyed a monopoly on taking tourists right into the mist at the base of the falls for over a century from docks on both sides of the border.  But recently a company called Hornblower arrived on the river.  Hornblower already runs tours to Alcatraz and the Statue of Liberty. Two years ago it won a bid to run tours on the Canadian side of the falls.  Now Maid of the Mist only operates from the American side of the river. 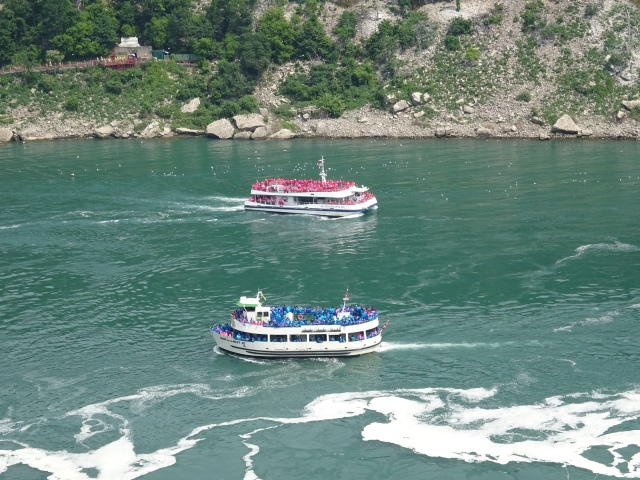 Hornblower passengers in red, Maid of the Mist in blue

Both boats take you right up close to the base of the falls.  We took the Maid of the Mist trip many years ago and highly recommend it.

Walk south along the Canadian side and you can get a close up view just as the water drops over the falls. 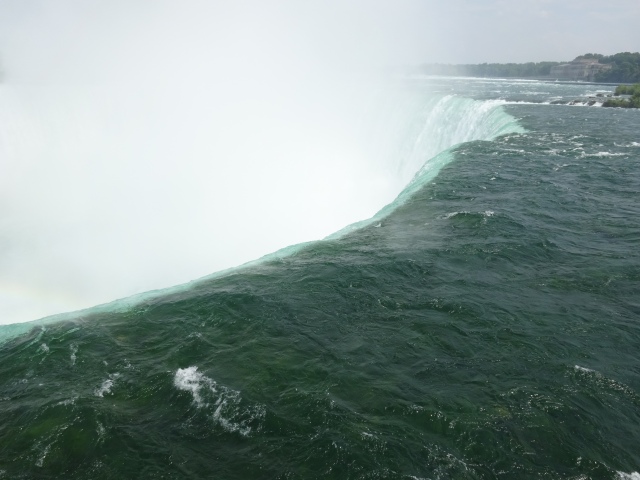 Looking down over the Canadian Falls as a Maid of the Mist boat approaches (can you see the rainbow?)

Many thanks to Dave and Sue for this fun international trip.  We had a great time!