We have spent a couple of late afternoons enjoying “happy hour” and dinner at Dave and Sue’s beautiful home outside Geneseo.  They have a great property with a beautiful house built in 1824, along with a couple of barns and fields.  It is a perfect place to enjoy viewing wild life and their two dogs roaming in a large fenced yard. 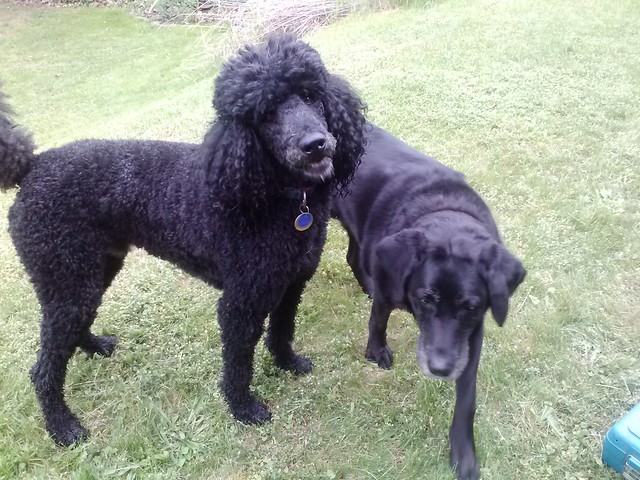 Lewis on the left, Sasha on the right

Sasha is feeling her age so only enjoys a stroll in the yard occasionally, but Lewis is a ball of energy.  Throw something into the yard and he will race out to retrieve it.  This activity will continue until you decide to stop.  There may be a point where Lewis quits, but we did not have the stamina to reach that point, if it does exist. 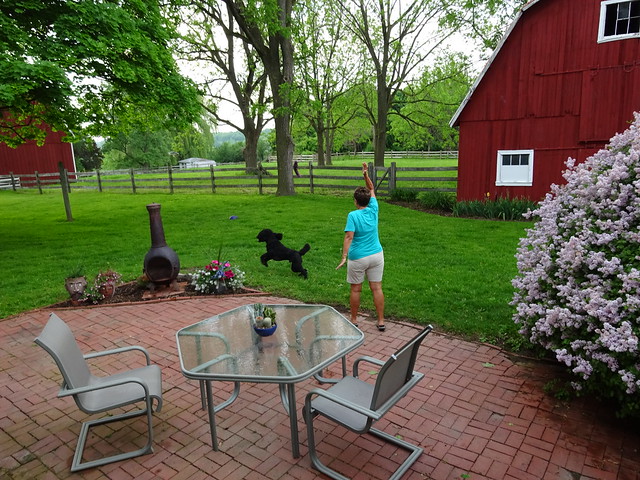 One afternoon we were seated on the porch watching a thunderstorm rumble through the area.  At one point, during a period of heavy rain, Sue spotted a deer standing in the nearby pasture.  We commented that it was odd that the deer would stand in the open field during a heavy rain with thunder, rather than seek the safety of the woods. 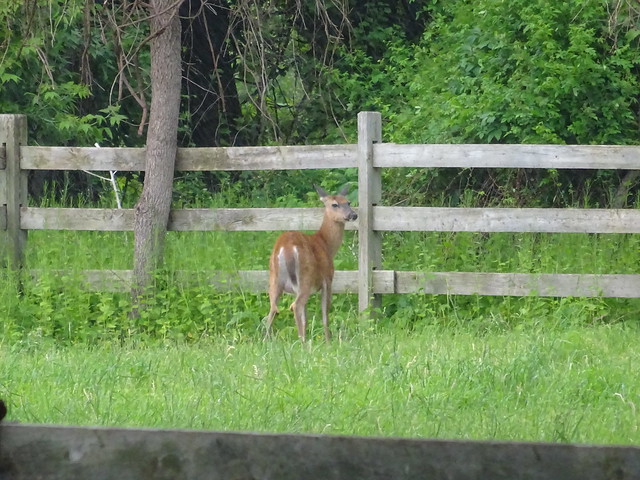 As we watched, John spotted what looked like the bushy tail of a squirrel near the deer.  Suddenly, something rose out of the grass and scampered toward the deer. 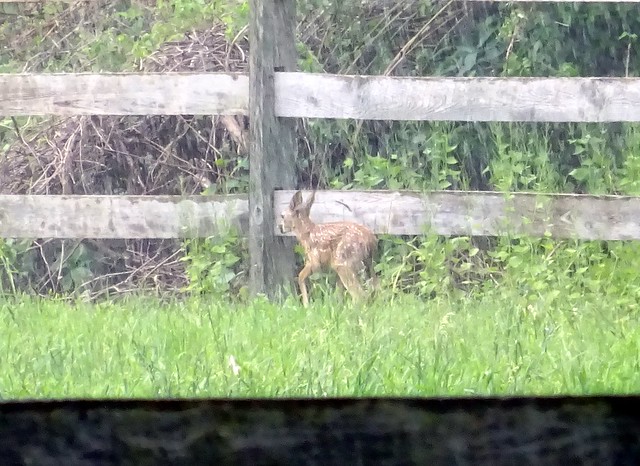 Wow, no wonder the deer had not bolted during the rain.  She was giving birth!  The little fawn at first staggered a bit, but soon gained steady footing and began to move quickly around the mother.  After a short time both headed for the gate and moved off into the nearby woods.  What a treat to watch this! 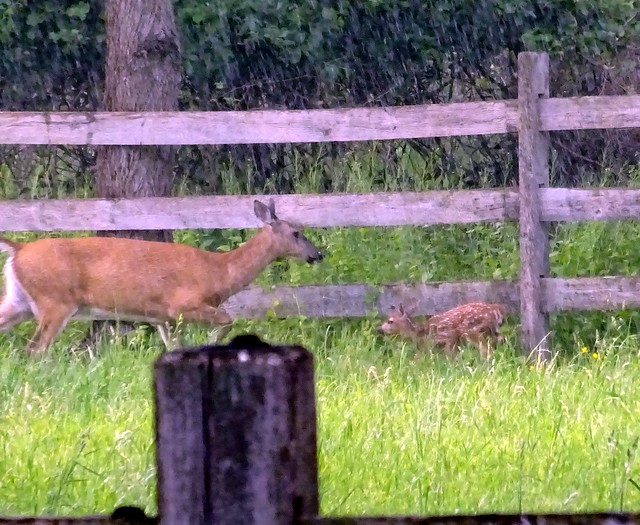 A couple of days later we were in the kitchen ready to sit down to a meal.  Pam looked out the window and commented that the fake turtle on the walk looked almost real.   Both Dave and Sue commented that they didn’t have a fake turtle in their yard!  At first Pam thought that they were just teasing (apparently living with John made her a bit wary of this type of prank) and didn’t believe them.  But when the turtle’s head moved from side to side she knew it wasn’t a fake. 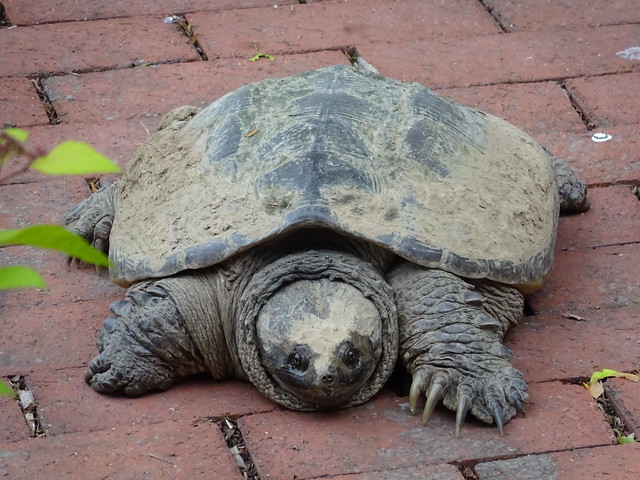 A quick check in Google revealed the visitor to be a large adult snapping turtle (emphasis on the word large!). 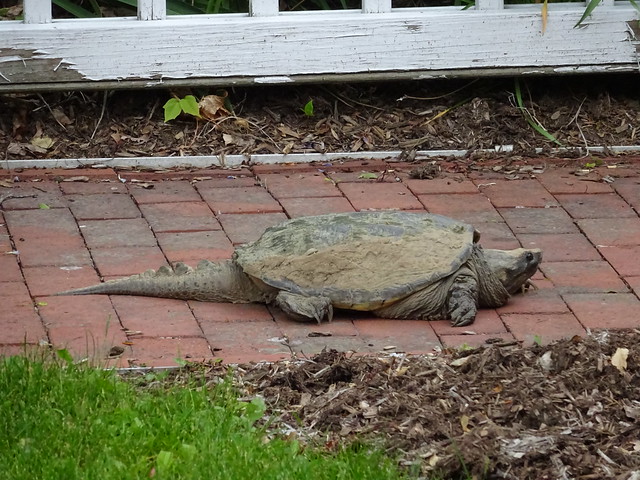 The turtle sat on the walk for a few minutes then slowly (after all, it is a turtle) began crawling under the nearby fence.  Dave and Sue feared it was looking for a place to give birth (hey, it just happened with a deer, didn’t it!) so Dave decided to relocate the visitor in a nearby field with a pond near by.   Snapping turtles are not very pleasant, so with care Dave used a hoe to pull it out from under the fence and John scooped it up with a coal shovel. 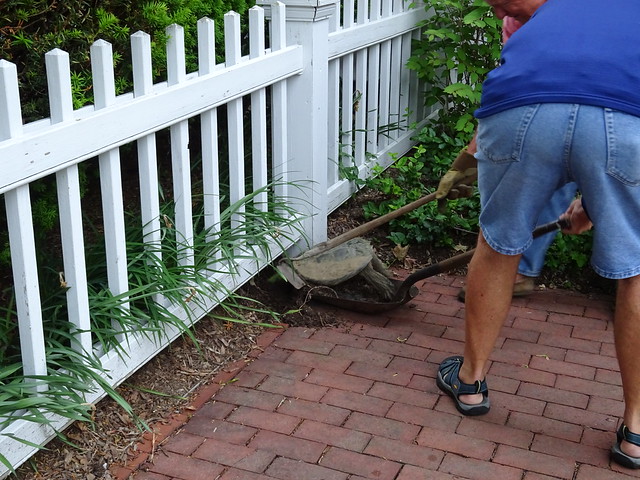 The angry fellow was tenderly placed (OK, dumped, who can be tender with an angry snapping turtle?) into a trash can for the ride to her (his?) new home. 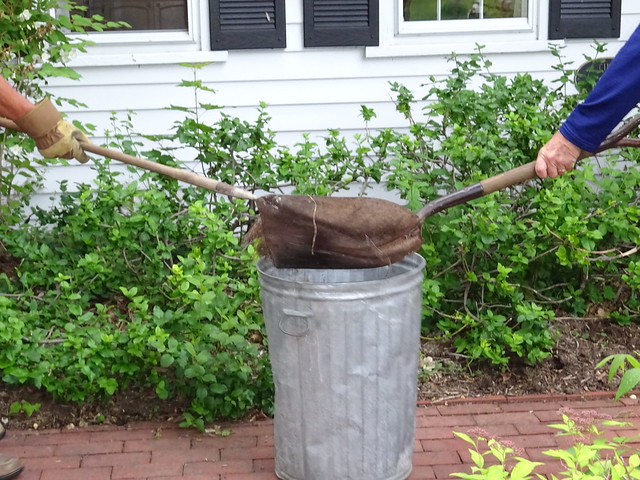 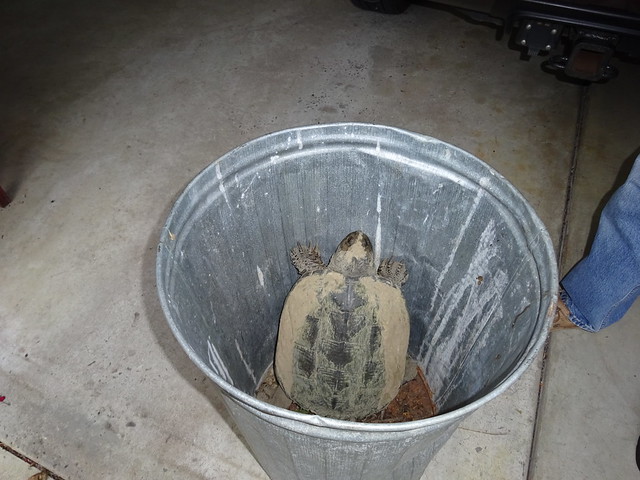 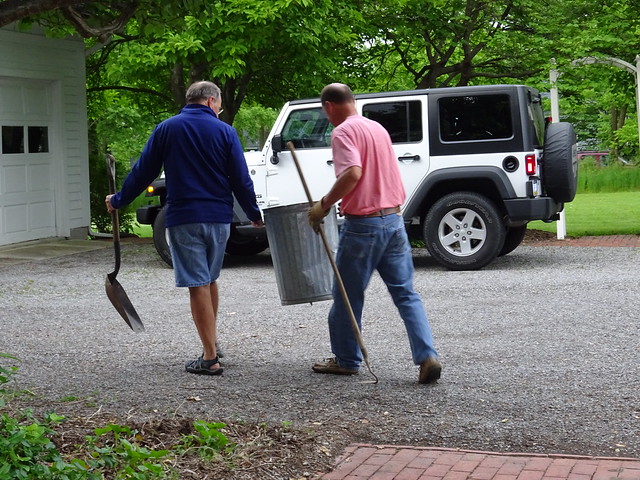 After a short but angry ride in the can, the visitor was deposited in a field where she quickly (for a turtle) moved into the weeds.

Wow, dogs and deer and turtles.  This place is like a zoo!

23 Responses to Living on Animal Farm