We are continuing to enjoy our stay at the lakeside site owned by Dave and Sue.  Not only are they great hosts, they also are great tour guides.  One recent afternoon they took us north about 30 miles for a look at downtown Rochester.

After a brief ride around some of the most interesting neighborhoods near the city, we headed for the downtown area.  John, who thinks he knows maps of the US better than the folks at Rand McNally, asked where the  Ontario lakefront was located.  He was surprised to learn that Rochester is not on Lake Ontario!  While a small neck of city owned land reaches from the city to the lake, the downtown is almost ten miles from the lake.   OK, so why did the city develop where it did and not along the lake?  The answer is pictured below. 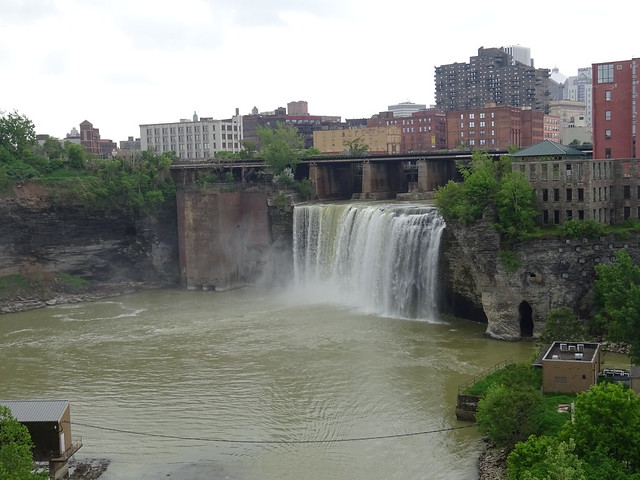 Water Power ! !  In 1803 three former army officers from Maryland (one was named Rochester) purchased a 100-acre  tract from the state along the Genesee River. They chose the site because its three cataracts on the Genesee offered great potential for water power. 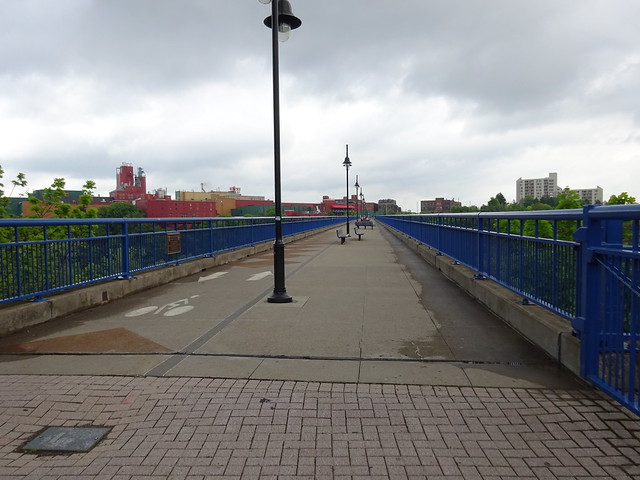 We parked the car and walked out on the Pont de Rennes Pedestrian Bridge over the river and enjoyed a great view of the High Falls.  The bridge has been closed to auto traffic for many years but Dave is so old he can remember driving a car over it!

On one side of the bridge is a Rochester landmark, the Genesee Brewery.  Both our parents enjoyed many a Genny beer in their lifetime, so we felt our families had an important financial role in building the brewery.  We even thought they might have a building called the Getman Center after Pam’s late father, but we couldn’t locate it (sorry Jack!) 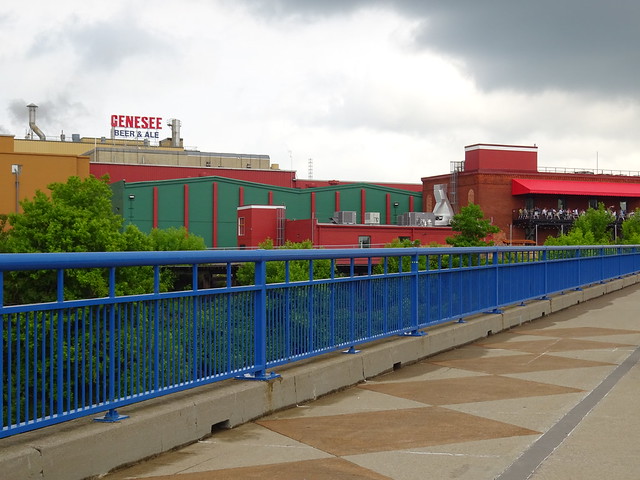 Turn to the other side of the bridge and you have a great view of the High Falls, a key landmark in the settlement of the city of Rochester. 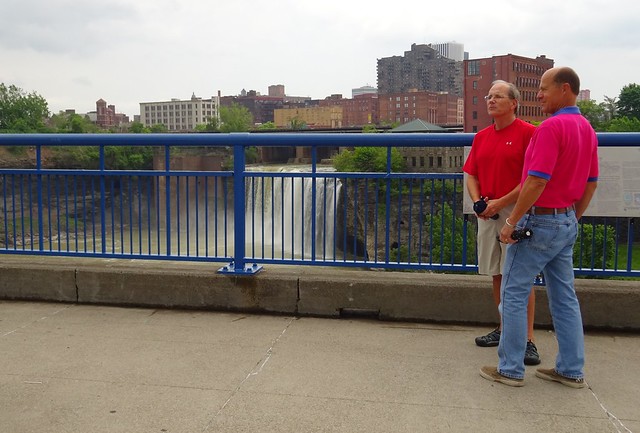 Walk to the end of the bridge and you arrive at the Brew House, a restored building constructed in 1904 as a state of the art bottling plant.  Today it has a small museum on the first floor and a very nice restaurant on the second floor. 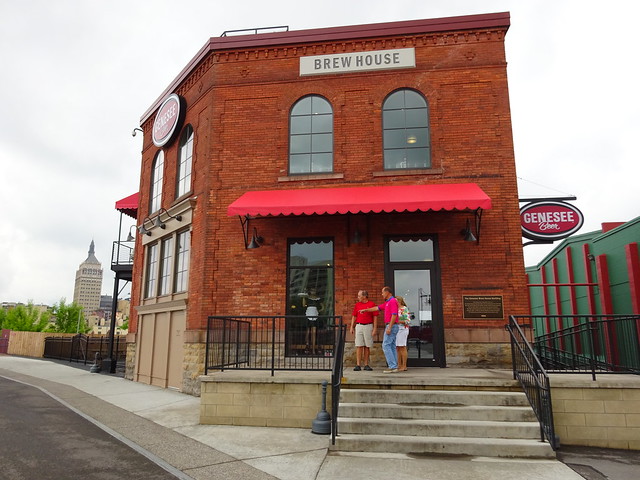 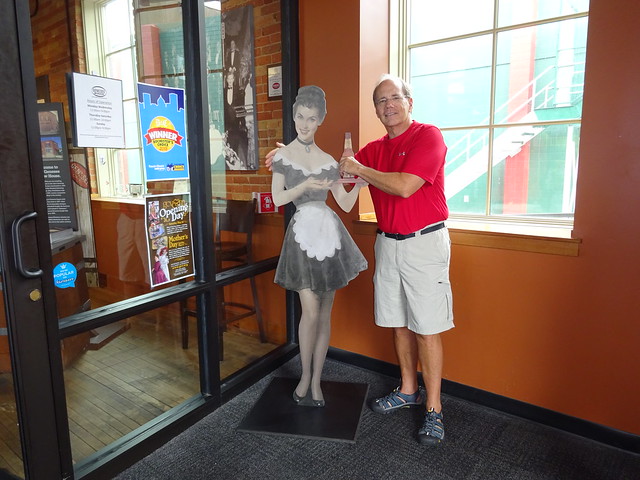 What a surprise!  The restaurant serves a wide variety of Genesee beers.  Oh, and they also have a very nice lunch menu. 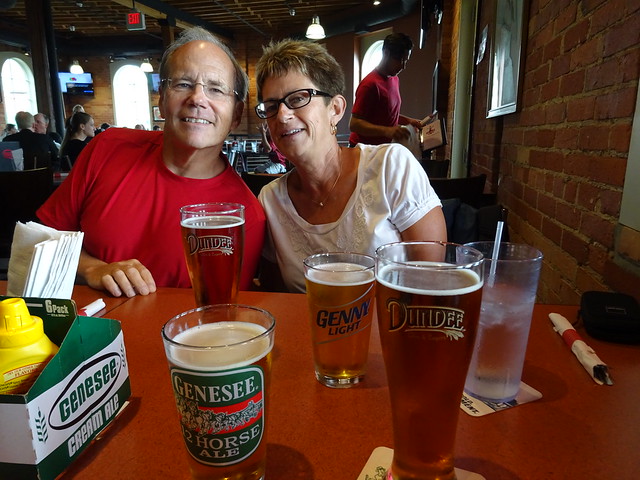 Next door to the Brew House is the Genesee Brewery, with three large cans of their product prominently on display.  Imagine, over 36 million fl. ounces of beer per can! 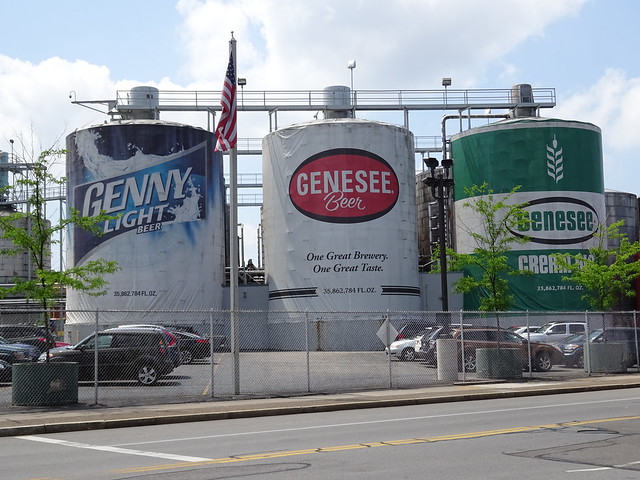 After lunch we drove about ten miles north to visit Ontario Beach Park, along Lake Ontario at the mouth of the Genesee River.  The park has a nice beach, large grassy picnic area, and a pier jutting out in the lake protecting the mouth of the river for boats. 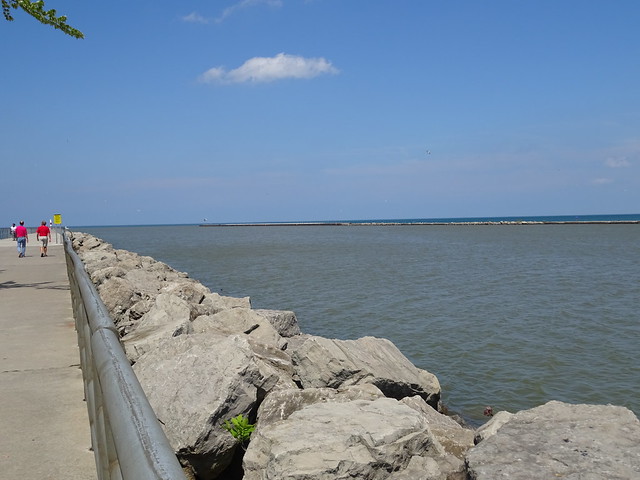 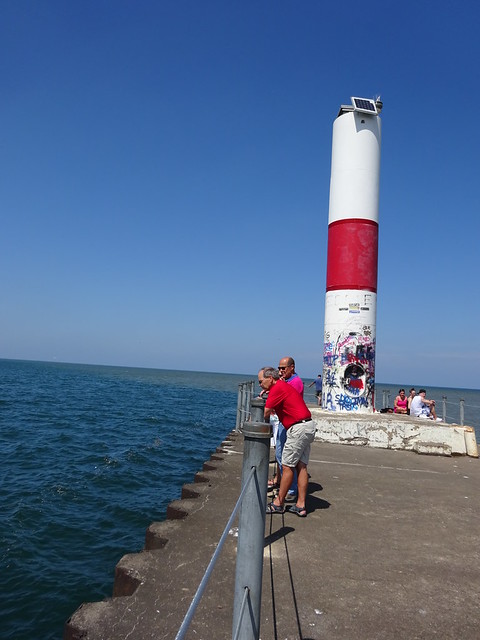 A couple of days after our tour the four of us drove to the nearby Livingston Country Club so the guy’s could enjoy a round of golf. 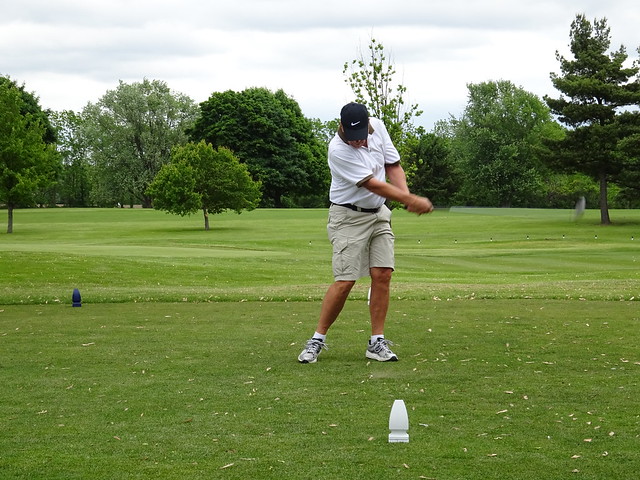 While looking for his golf ball on the second hole, John found another golf ball hidden in the weeds.  Not that John is cheap or anything, but if he finds a ball that is in decent shape you can be sure it will find it’s way into his golf bag for later use.  But even he has his standards, and this find did not make the cut.  Not that there was anything wrong with the condition of the ball.  It was free of nicks and cuts.  The problem was the color of the ball.  It was PINK!  What kind of a man plays golf with a pink ball?  So John tossed the ball to Dave with the assumption he would laugh a bit and toss the insulting object back into the weeds.  Much to our surprise, as Dave set up to tee off on the next hole that little pink object was perched proudly on the golf tee! 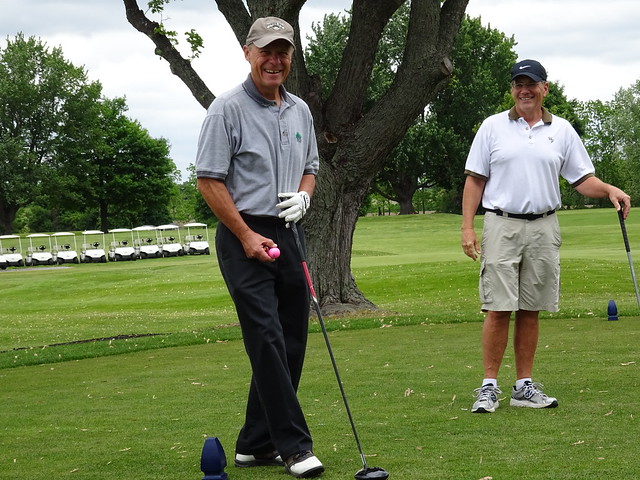 Dave continued to play with the pink ball for the remainder of the round.  In fact, he played pretty well with it.  On a couple of occasions, despite an excellent swing by Dave, the ball headed for the trees.  But each time the little pink guy quickly exited the trees and ended up near the fairway!  The only time Dave hesitated in claiming it to be his was when it was hit (again, not due to any bad swing by Dave) near a tee box on a nearby hole.  Dave decided that if there was anyone standing on that tee he would ask Sue to claim it was hers and retrieve it.  But the nearby tee was empty, so he proudly walked up and played his next shot!

There are more adventures in our future here in central NY so stay tuned  . . .