Friends in DC and Gettysburg

In February we had the opportunity to meet fellow full timers Terry and LuAnn (Paint Your Landscape).  We knew they were going to begin a summer volunteer camp host stay in Greenbelt Park in College Park, MD outside Washington, DC beginning in May.  We wanted to stop and visit with them so we reserved a site at nearby Cherry Hill RV Park, where we stayed in November during our trek south.  We arrived on a beautiful Sunday afternoon so we jumped into the Jeep and headed into the city to ride our bikes along the Potomac River. 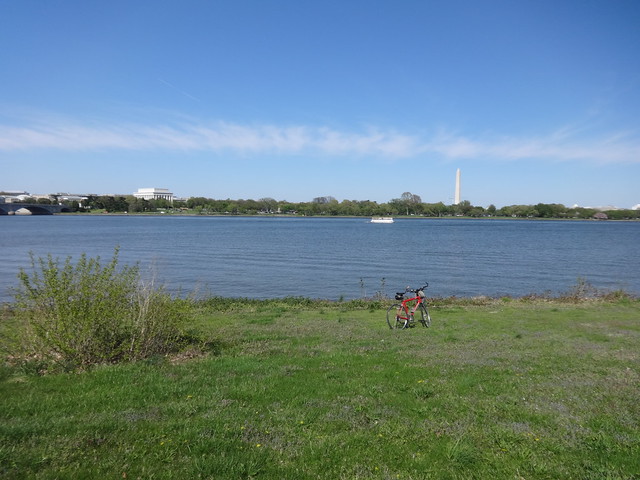 Lincoln and Washington Monuments viewed from across the Potomac

We parked in the East Potomac Park near the river just south of the Jefferson Monument and unloaded our bikes.  From there we headed north to see if the Cherry Blossoms were still out (nope, all gone) then crossed the Arlington Bridge into Virginia.  There is a great bike path along the river on the Virginia side that goes all the way south to Mount Vernon.  We rode it south to Old Town Alexandria and back. 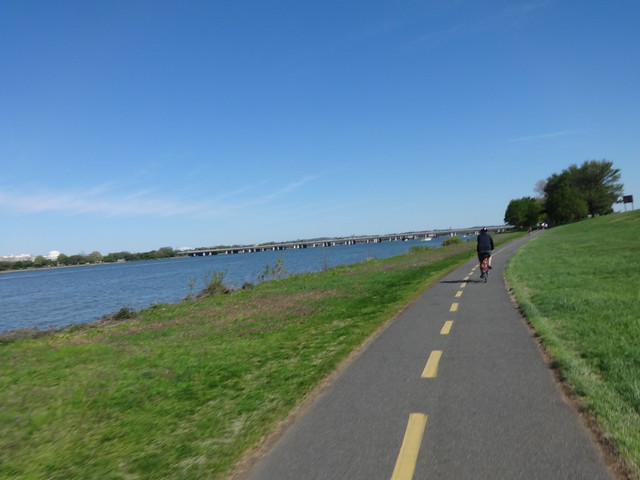 The next afternoon we returned to Alexandria to meet friends Larry and Mary Anne for lunch.  Larry and Mary Anne also own a Discovery motorhome, and we have often met up with them in our travels.  They live in Fredericksburg, a bit south of Alexandria.  We enjoyed catching up with them over a nice lunch and hope to see them later this year in our travels (oops, forgot to take a picture of our meeting!).

The next day we arranged to meet Terry and LuAnn at a coffee shop (there just happened to be one of those “chain” coffee shops nearby).  After enjoying a hot drink and conversation we jumped in their truck and headed through a monsoon to a Panera Bread for lunch. 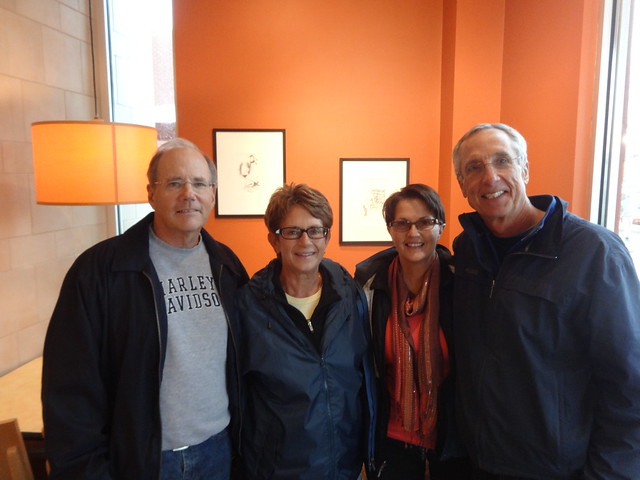 The plan was to meet again the next day, weather permitting.  But the weather did not cooperate as the monsoon continued.  Rather than thrash around in the flooded streets we decided to meet the following week in Gettysburg, as Terry and LuAnn wanted to tour the battlefield on one of their days off from camp hosting and we would be near there anyway.

So the next day the rains ended and we continued our trek to the north.  We are now parked in our old home town of York, PA for a visit with friends and our daughter, Jessica.   The week after our arrival in York we arranged to meet Terri and LuAnn in Gettysburg on what was predicted to be a decent weather day, with even some sunshine.  But apparently Terry and LuAnn have some sort of dark cloud over their heads because as we approached Gettysburg the sky quickly went from partly sunny to overcast!  But that didn’t deter us and the four of us loaded into our Jeep and began our tour.  John has a background in American History and knows just enough about the Battle of Gettysburg to fool less knowledgeable people into thinking he really knows something, so he lead the tour.  His tour is not as detailed as the one given by one of the licensed guides, but he is a whole lot cheaper! 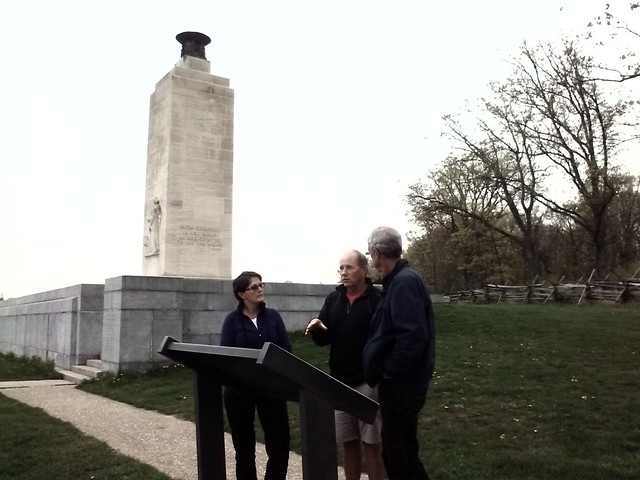 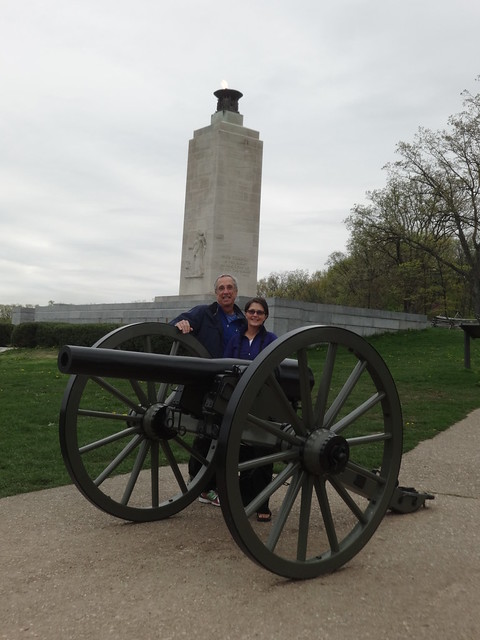 Terry and LuAnn at the Eternal Light Peace Memorial

Despite the weather prediction of no rain until late in the day, the skies opened up just before noon.  So we adjusted our tour (the guide didn’t seem to mind) and headed into town for lunch at the Farnsworth House.  The building was in existence during the battle and was used by Confederate sharpshooters.  Chips in the bricks on the wall along the entrance way mark the spots where bullets struck the building. 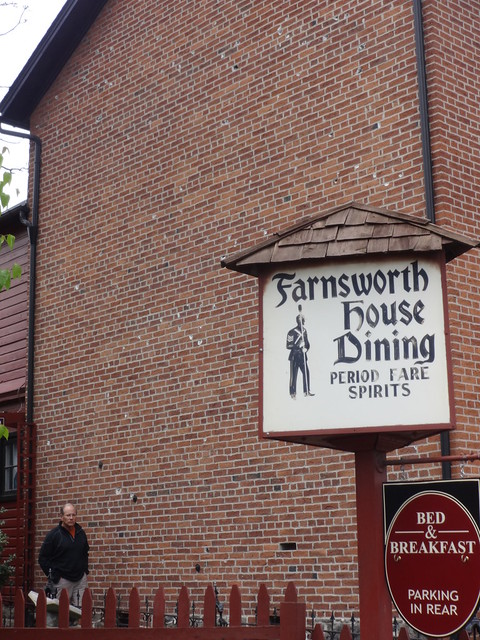 White marks are where bullets struck the building

While the skies remained overcast, the rain soon stopped so we were able to continue our tour after lunch.  Late in the afternoon we released our captives at their truck and allowed them to return to their park in Maryland.  We really enjoy being with Terry and LuAnn and will hopefully see them again later this year somewhere out west. 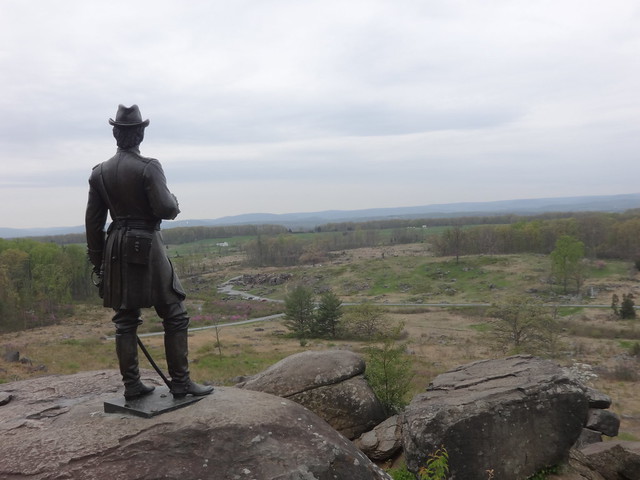 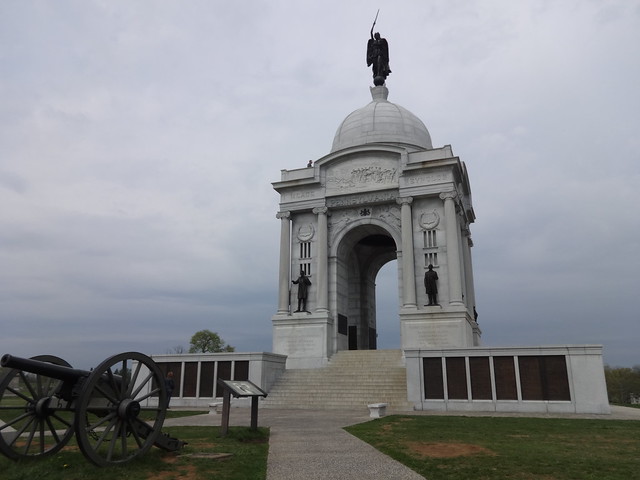 The Pennsylvania Monument, largest on the battlefield

It is interesting to note the differences in the memorials on the Union side of the battle compared to the monuments on the Confederate side.  Below is the 13th Vermont Memorial, typical of many along Cemetery Ridge where the Union forces dug in. 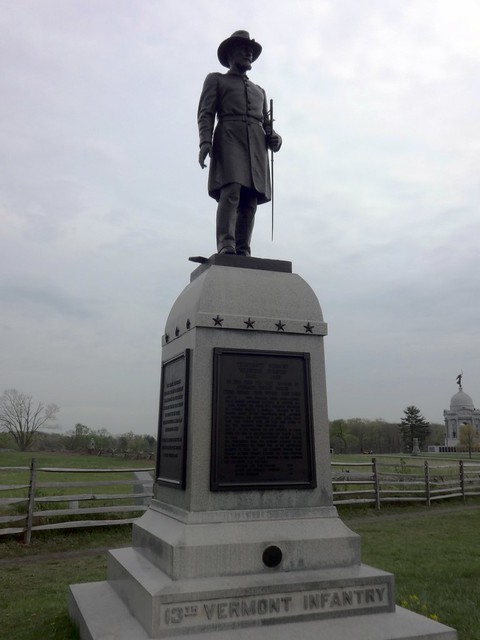 Now contrast that with the North Carolina Monument along Seminary Ridge, where the Confederate forces dug in. 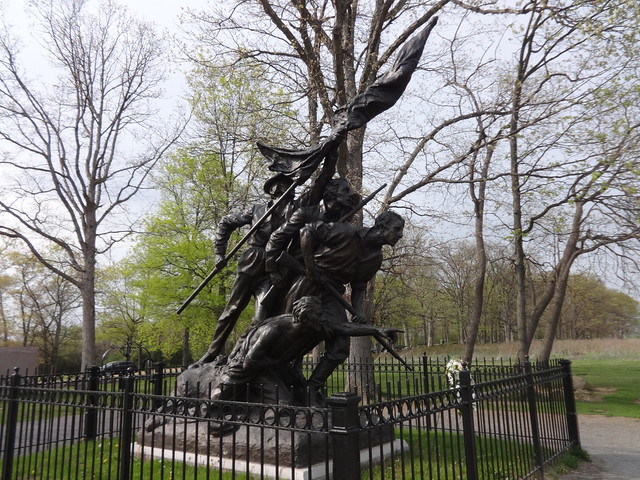 Most of the Union monuments have a soldier (usually an officer) standing in a stately pose as if surveying his troops.  Most of the Confederate monuments are much more dramatic, with troops in gallant attack poses.

OK, one “interesting story” before closing this blog.  Let’s look again at the statue on the Vermont Monument.  We have seen this statue before but the last few times we have been through the park couldn’t find it.  But we began telling Terry and LuAnn the story behind the statue when LuAnn spotted it!  As people pass this monument nothing seems unusual about it.  But if you look closely you will see two unusual things.  One is the sword held by the officer.  He is holding it in his hand without a scabbard on a belt.  The second thing is sitting at his feet. 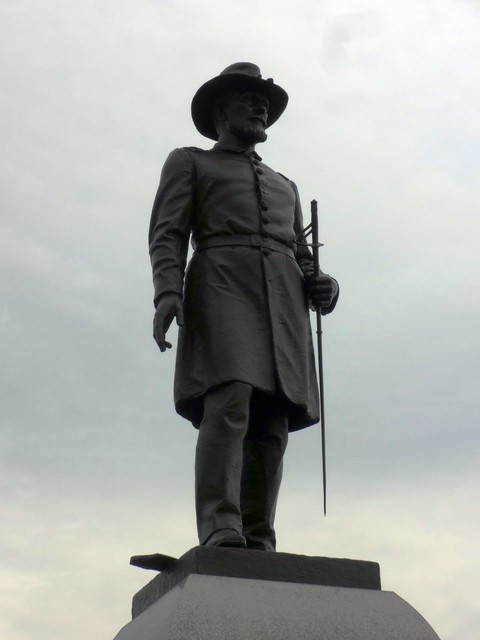 It is a camp hatchet.  Now read the plaque in the picture below. 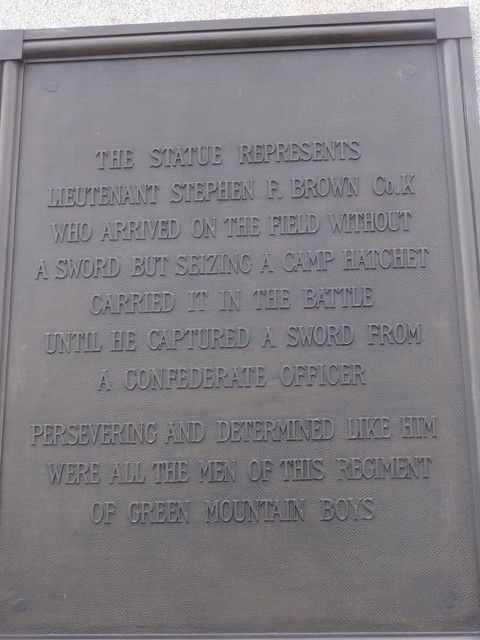 Now you know that Lt. Brown arrived on the field without a sword.  But it doesn’t explain why this occurred.  The story is kind of interesting . . .

As Union troops marched quickly from Maryland to Gettysburg (they marched 18 miles a day for seven days in the summer heat) commanding officers forbade soldiers to leave their ranks for any reason except when ordered to halt.  Brown disobeyed that order and stopped to fill canteens for his men.  When the troops reached Gettysburg, Brown was relieved of his command and his sword was taken.  But during the heat of Pickett’s Charge it was all hands on deck and Brown was ordered to the front.  With no weapon nearby he grabbed the hatchet and headed to battle.  During the fighting Brown captured a stunned Confederate officer and relieved him of his sword.  Years later when men from his company wanted to build a monument to his bravery, the powers that be refused to allow a statue with an office wielding a hatchet.  A compromise was reached where Brown would hold the captured sword in his hand and the hatchet would be placed at his feet.    And you thought history was boring ! ! !

43 Responses to Friends in DC and Gettysburg