A Taste of “Homeowner’s Springtime Blues” in Atlanta

After a great two weeks of golfing in Ashburn, GA, we headed north to Atlanta for a visit with our son, Kevin.  We had volunteered to help him with some spring lawn work for a few days and soon were reminded of two important adages:

1. Never volunteer! (they teach you that in the army)

2. Owning a house is a great deal of work (the memory of this had faded in us after four years in the motorhome).

Upon arrival at Kevin’s, he presented us with our own personal copy of a “to-do” list.  Holy S***, most of the tasks involve digging in the dirt or painting!  We tried to quickly come up with an excuse to get out of this dilemma but it was too late, we were committed (anyone who gets themselves into this situation deserves to be committed!).  So early the next morning (OK, it was just after lunch!) we headed for our first (of many) visit to Home Depot to buy some plants and rent a power washer.  Our primary task was to clean and paint the lattice cover over the drive and front porch.  Kevin had cut down the small amount of vines covering the front of this monster while we rented the power washer.  Once we returned, Kevin and then John enjoyed a few fun-filled hours spraying water into the air and feeling it blow back on top of them. 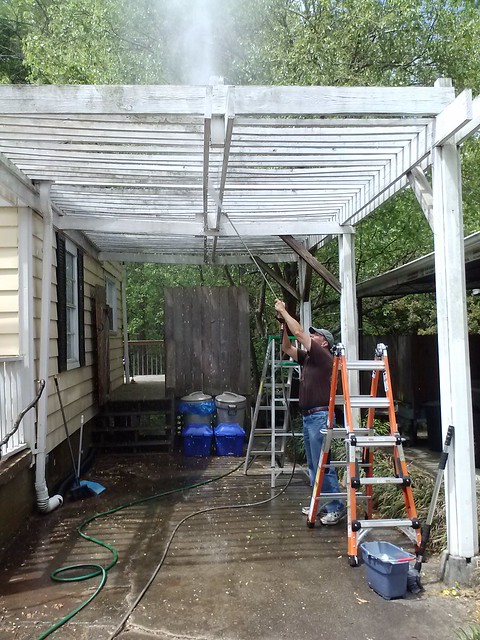 While the lattice was drying there is no rest for the weary.  We spent the remainder of the day planting and mulching.  The fun just went on and on and on and . . .  you get the idea. 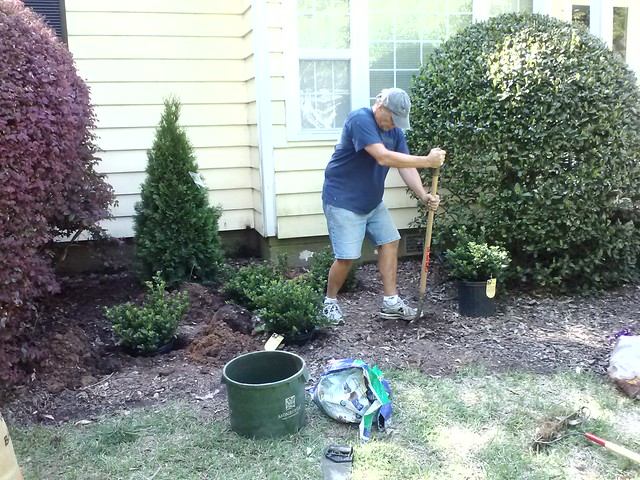 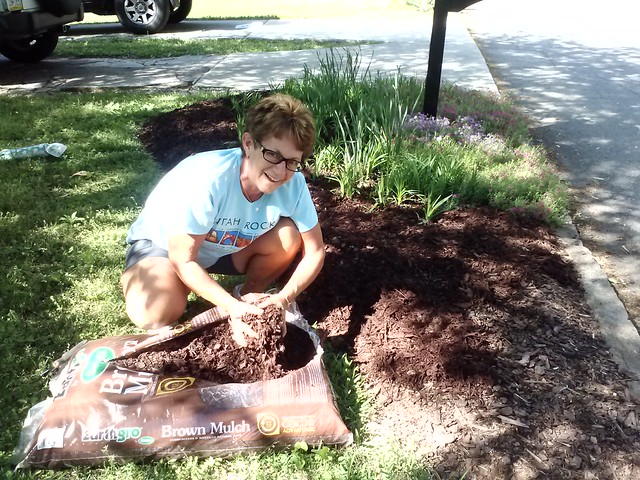 The next day the fun really began!  It was up the ladder, paint what can be reached, down the ladder, move a few feet, then repeat. 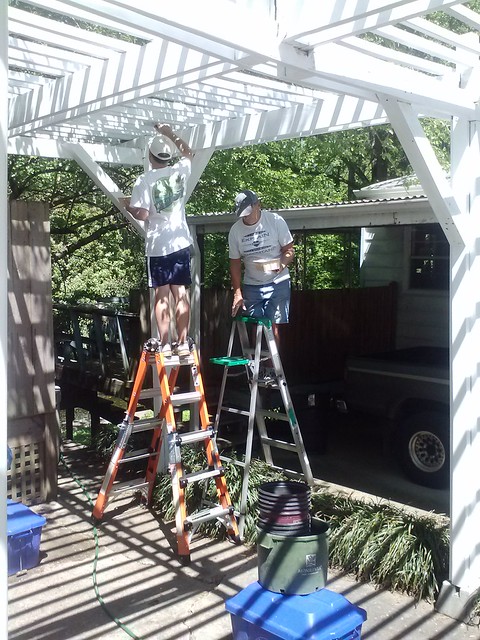 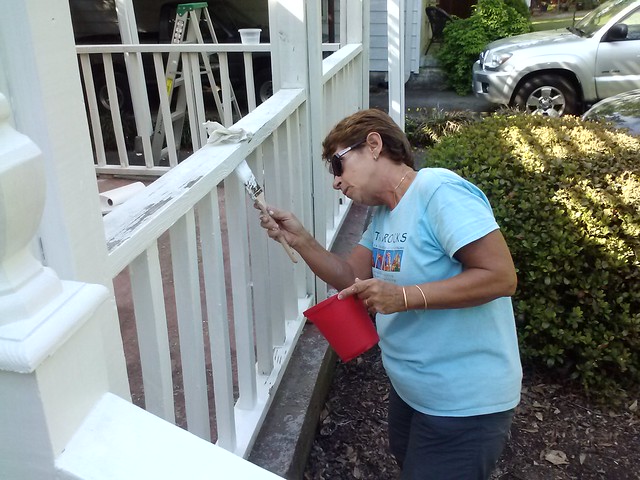 A couple of rainy days interspersed in the process slowed us down a bit, but we did finally complete most of the tasks on the list before leaving Atlanta.  It was hard work but the front of Kevin’s house really looks nice, so our efforts were not in vain.

This morning we drove about three hours north to Gaffney, SC where we will have four new tires installed on the motorhome tomorrow at the Freightliner Service Center.  We replaced the front two tires about a year and a half ago but the rear four tires are approaching seven years of age, so it is time for new ones.  We have had the motorhome serviced here many times and have found the Freightliner Service Center here does excellent work, which is why we wanted them to change out the tires.  They will install the tires but do not sell them so they gave us recommendations for where to buy the tires, then have them dropped off at the Freightliner Center.  A few weeks ago John called the first dealer on the list to order the tires.  After searching for a view of the dealer on Google Maps and talking with Bill, the owner, on the phone he wasn’t real confident in Broad River Tire Service, but since Freightliner recommended them and we hadn’t paid any money, we decided to just go to Gaffney and see what happened.

After arriving at the service center just before noon and getting the motorhome parked in their customer lot, we headed out to find Broad River Tire to check out our purchase and pay the bill.  The very nice receptionist at the service center warned us that the place was not much to look at (but she assured us they were very nice, dependable people).  Boy was she right about that. 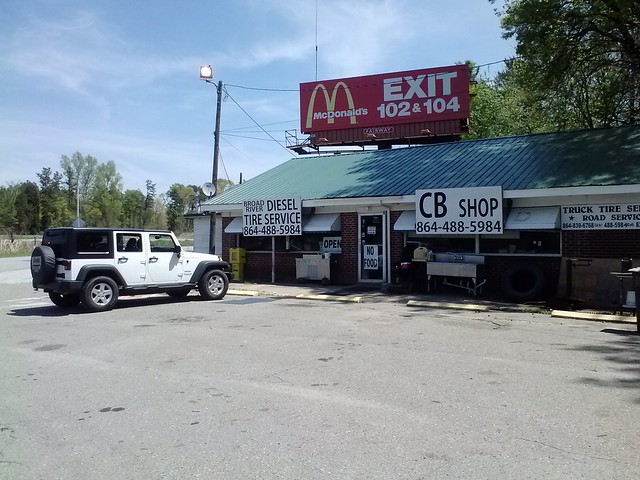 If you look closely at the front door you can just read the sign that says “No Food.”  No problem with that as there was no way we would eat anything out of this place!  From the look of the stainless steel sink sitting outside by the front door at one time this was a restaurant. 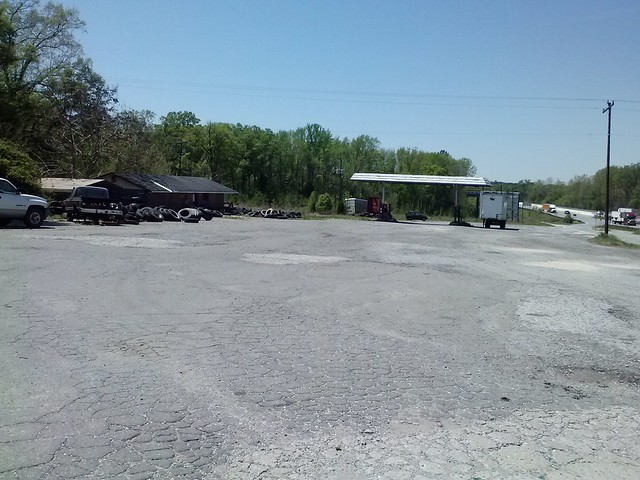 The view to the right of Broad River Tire

A sign on the door said that if the door was locked to call a phone number listed on the sign.  Of course the door was locked when we arrived so we called the number.  When Bill answered, he said someone would be there in 15-20 minutes.  After almost a half hour two guys finally showed up and, after John checked the DOT number (shows the date of manufacture) we paid for the tires.  They will be dropped off at the service center this afternoon and Freightliner will install them tomorrow morning.  We’ll stay overnight in their lot then continue our trek north on Saturday.