Our last week in Cortez, FL was a bit slow due to poor weather.  On Tuesday Pam joined some friends staying in the park on a visit to the Southeastern Guide Dog School to participate in their Hug a Puppy program.  The idea is to provide socialization experience to young puppies who are thought to be good candidates for guide dog training in their future.  While the group found the tour to be very interesting, it was clear that the puppy play was the highlight of the visit. 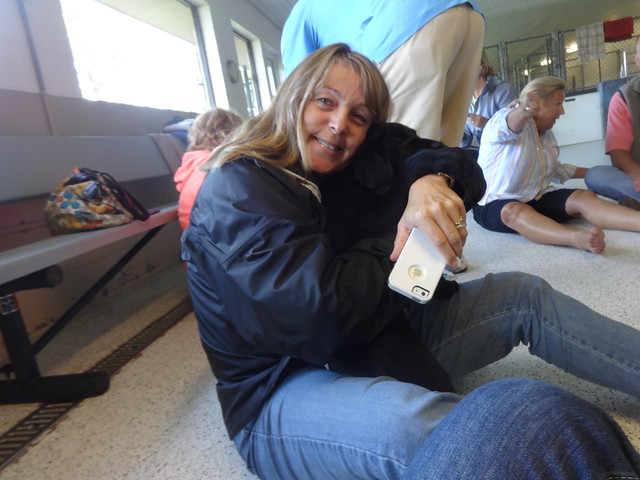 Karen gives the love to a cute little guy 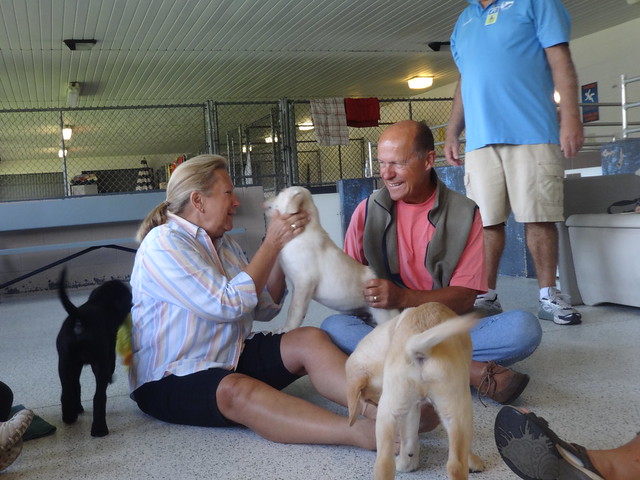 Dave and Sue find a friend 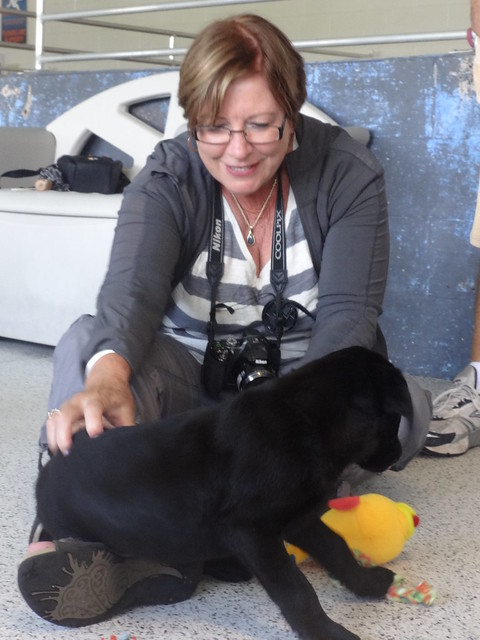 Pam (there are four Pams in the park) scratches a pup

As the weather continued to be cool, rainy, and windy, we were forced to cancel a number of activities, including a golf outing!  You know it’s cold and windy when John and Dave turn the car around and return to the park without even getting to the course!

The weather finally improved over the week end so we spent our last day on a bike ride to the north end of the island for breakfast.  During our last stay at Holiday Cove two years ago, friends Pam (yes another one!) and Herschel had bicycled with us to Ginny and Jane E’s Cafe, Bakery, and Store, so we were determined to make a repeat visit before leaving Cortez.  The four of us were joined by Dave and Karen (Cody’s “parents”) as we headed on to Anna Maria Island, again by bicycle. 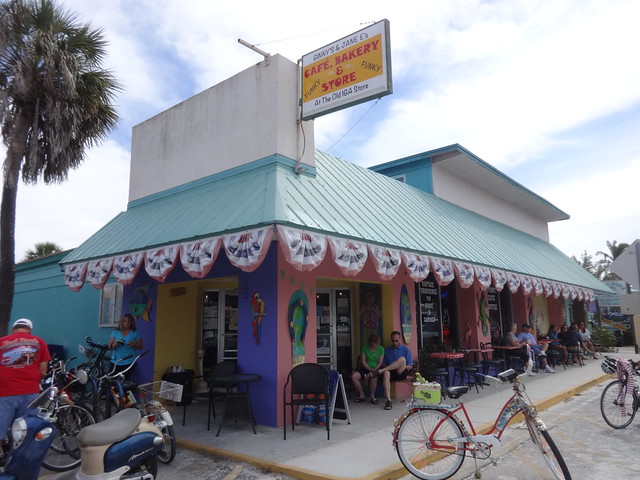 It is difficult to describe this place, so you’ll need to visit it yourself some day.  Located in an old IGA grocery store, it is a combination restaurant, furniture store, and knick knack shop.  You can get a very tasty breakfast or lunch and sit at a table that, if you like it, is yours for the purchase, as everything is for sale. 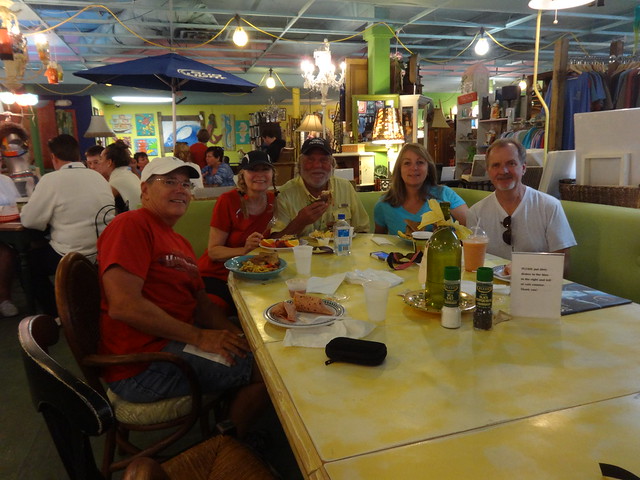 John, Pam (yes, another one), Herschel, Karen, and David

When we returned to the park, Karen went to free Cody from inside their fifth wheel.  Pam always has a small bag of treats for Cody whenever he stops by for a visit, so when they ask him if he wants to go visit Pam he almost passes out from excitement.  When Karen or David know we are sitting outside and the road between our sites is free of any cars, they will release Cody from his leash and he will “run like the wind” to our site.  Since we knew he was coming we watched, camera at the ready, as Cody began his mad dash.  Suddenly a Snowy Egret walked out of the bushes to the middle of the road, right in Cody’s path.  Usually Cody will chase birds, but with all his focus on the a potential treat, he just gave the intruder a quick bark (“Get out of my way!”) and continued his mad dash to our site and into Pam’s arms. 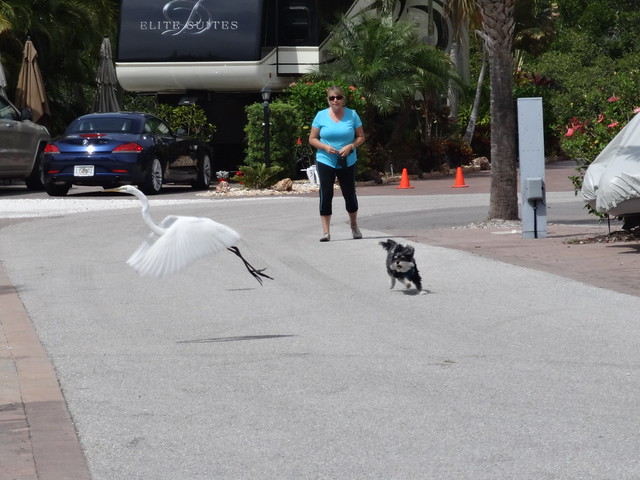 Get out of my way, you skinny bird!

This morning (Tuesday) was departure time so, after saying some goodbyes to good friends, we pulled out of Holiday Cove and began our trek north. 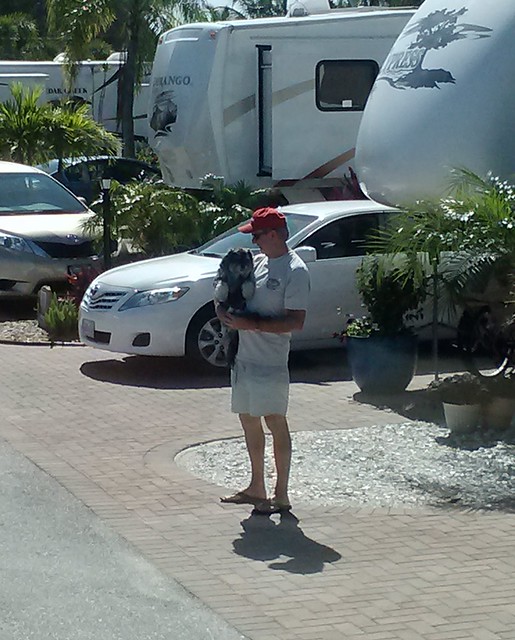 Cody and David watch as we leave the park

Our next stop is 350 miles north to the little Georgian town of Ashburn where there is a small RV park with a nice nine hole golf course.  While 350 miles is very “doable” in one day, when you are driving your home why spend all day on the highway?  So we split the trip in half and have stopped for the night in a Wal-Mart in Gainesville, FL.  We have stopped here before and like it because of a small strip of stores across the street. 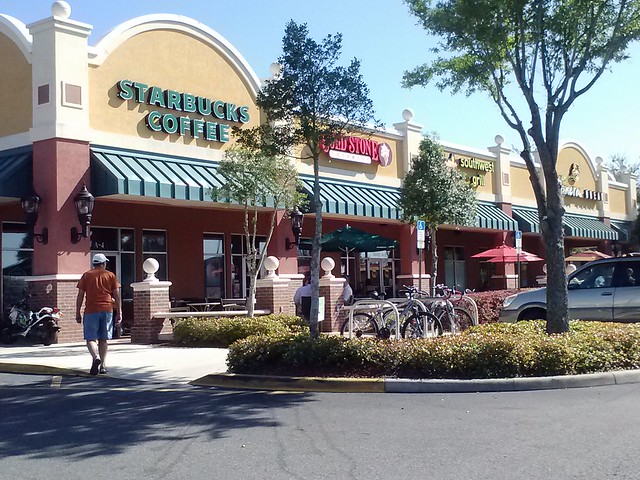 After visiting three of the four “establishment,” we’re back in the WM RV Resort for the night.  Tomorrow it will be about 175 miles, so we should be on the course by early afternoon.  Sue and Dave are going to join us in the park later in the afternoon and John and Dave are looking forward to a few days on the links!