Spring (Training) is in the Air

Our former home south of York, PA is located in the vicinity of both Philadelphia and Baltimore, so many people have sports alliances in one or both of these cities.  Two of John’s former teaching colleagues, Deb and Joe Dominick, are strong baseball fans.  Deb has always loved the Orioles, while Joe is a strong Phillies phan.  They contacted us a few months ago to tell us they were coming to Bradenton in March to take in a couple of pre-season games and invited us to attend the games with them.  Bradenton is home to the Pittsburgh Pirates training facility,  and Deb was getting tickets to one game the Pirates were playing against the Orioles and one game with the Phillies.  Nobody in their right mind would be a fan of a Pittsburgh team, but, since John follows both the Phillies and the Orioles, we jumped at the chance to attend both games. 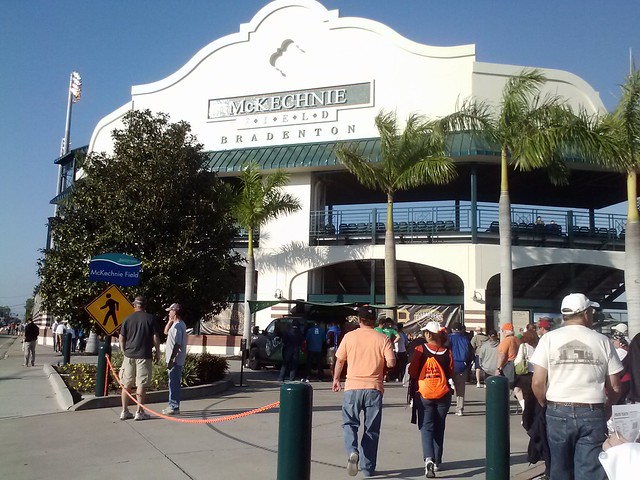 The first contest was a Thursday night game between the Orioles and the home team.  While most of the stars of the Orioles were not in the line-up, it was very enjoyable watching a baseball game in great weather in a beautiful small ball park.  Oh, and the Orioles won the game! 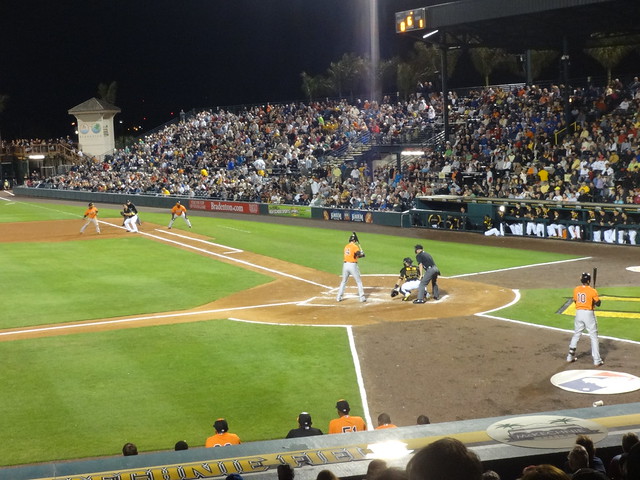 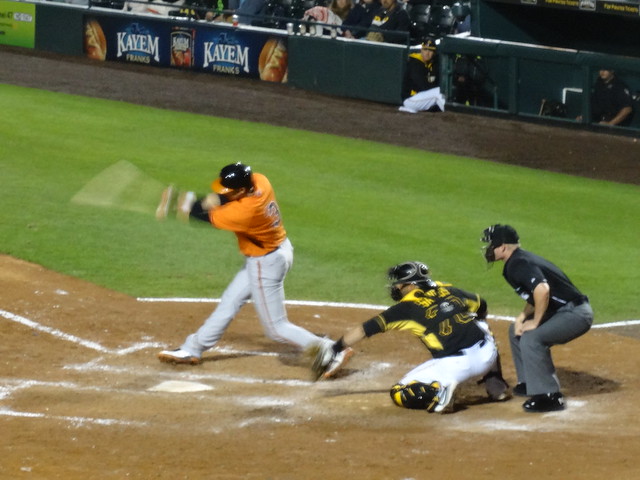 There was no game on Friday so the four of us jumped into the Jeep and headed south to Myakka State Park, east of Sarasota.  The park has miles of walking/biking paths and two great tours, one by airboat and another by tram.  Joe and Deb had taken the airboat tour before so we opted for the tram tour 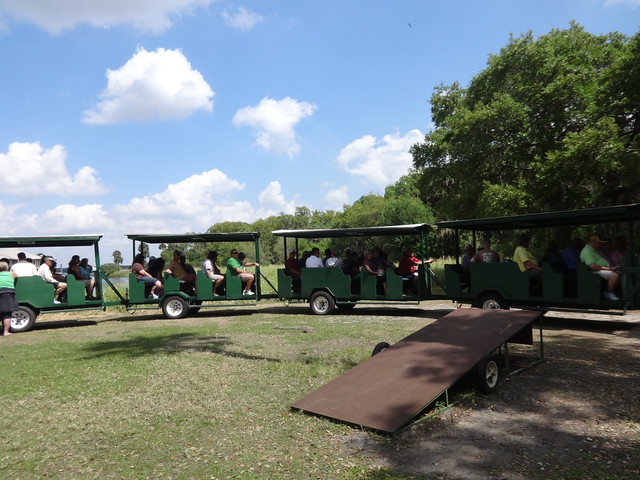 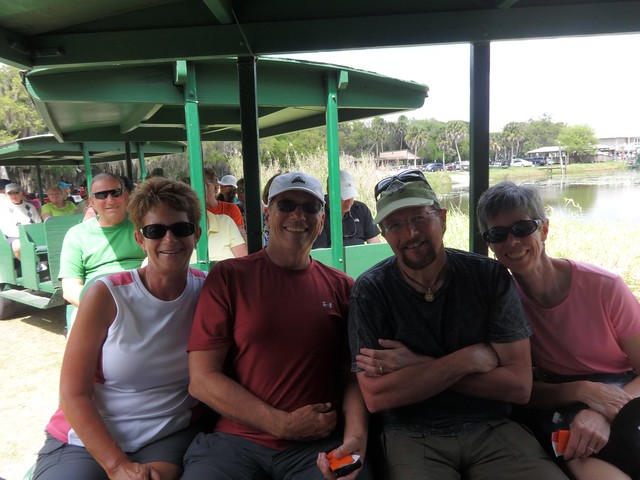 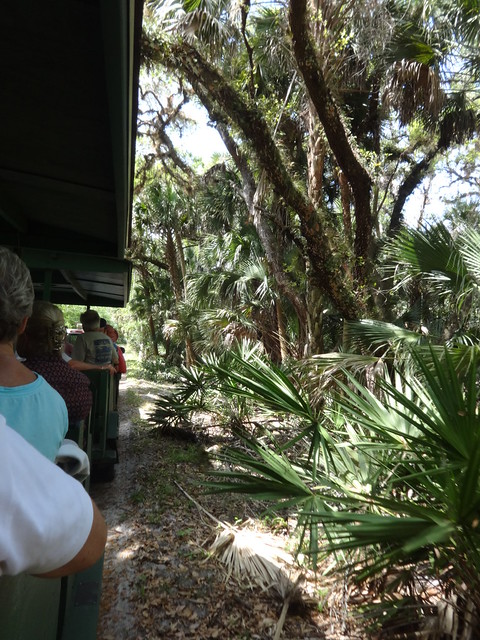 A view from the tram

The tram weaved it’s way through the park while the driver gave a great description of all the wildlife and plants along the trail.   At one point we passed an alligator who looked like she had a rough night, as her back was covered with what looked like broken up moss.  A closer look revealed a baby gator riding on her back. 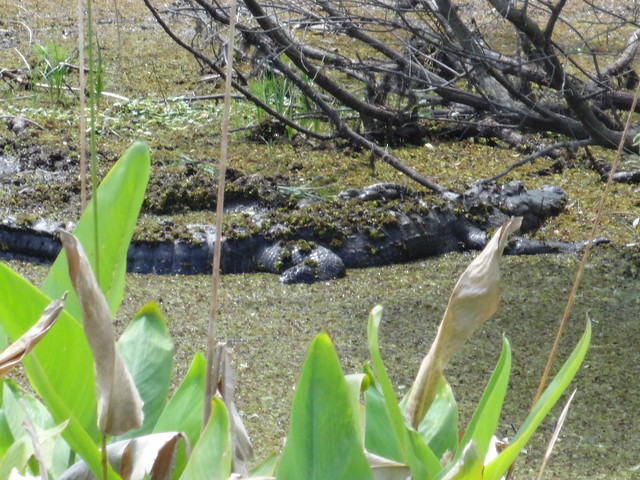 Can you see the baby alligator on the mother’s back?

After the tram tour we walked back to where the alligator with the baby was spotted and found she had turned around.  We could spot several babies in the water and on the land around the mother.  Below is a zoom of a baby nose to nose with the mother. 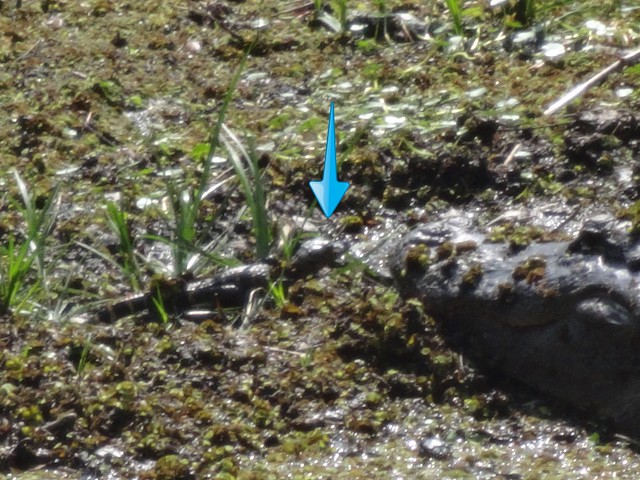 If you love birds, this is a great place to see many types.  Our group knew a great deal about American History (three history teachers) but was a bit short on knowledge about birds. 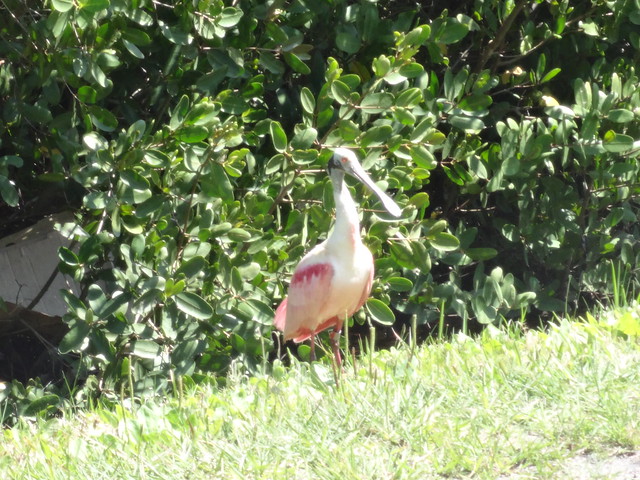 Near the parking area along the Myakka River we spotted a number of large alligators.  As we stood on the shore the one below swam in our direction. 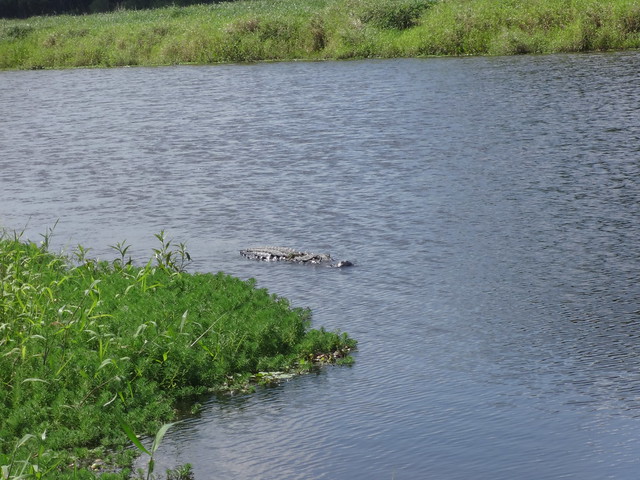 When it spotted Joe, it turned and headed in his direction. 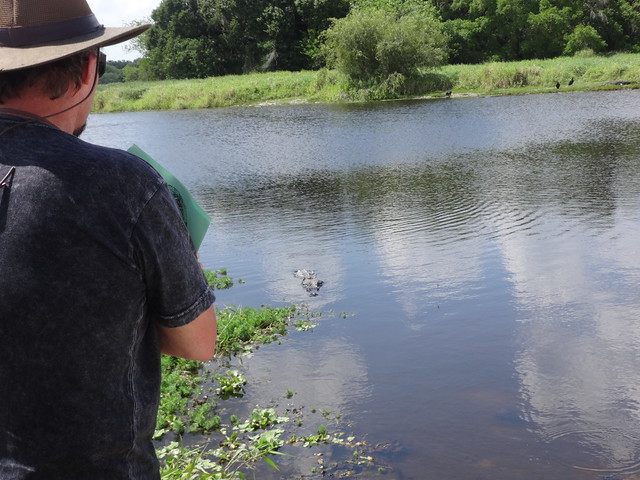 Joe must not have looked that tasty, as the gator stopped and just sat there eyeing what could have been a very satisfying meal! 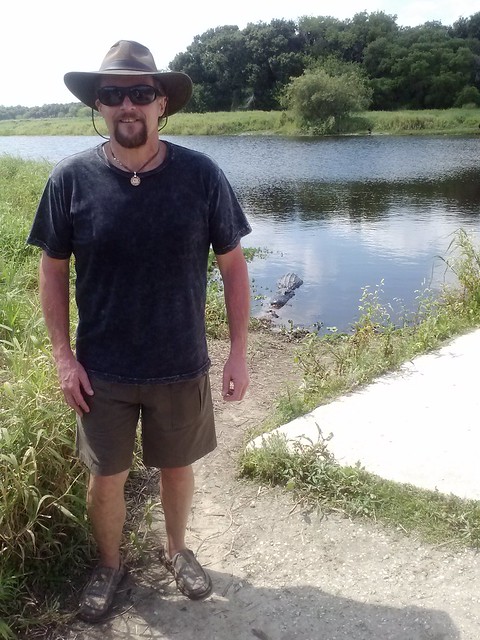 After touring the park we headed south on I-75 for a few minutes to have a bite to eat at a classic “Old Florida” restaurant.  Snook Haven is located in a heavily wooded area east of Venice right on the Myakka River.  Our friends Sue and Dave (Beluga’s Adventures) took us there a few weeks ago and we knew Deb and Joe would find it interesting. 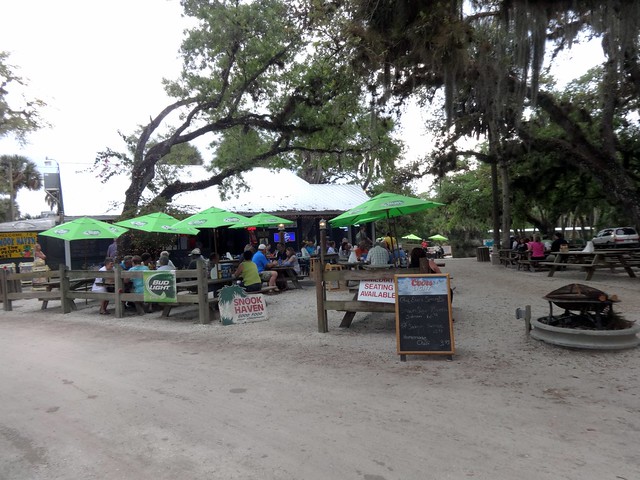 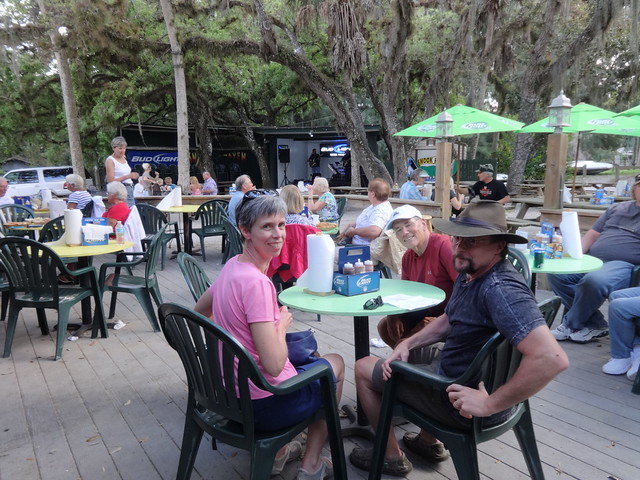 The food at Snook Haven is very good, but the atmosphere is what sells the place.  This is definitely a “kick back and relax” place!

The next day it was back to McKecknie Field for an afternoon game between the Phillies and that same team from western PA.  We were pleased when the starting line-ups were announced as most of the Phillies starters were going to play.  The second batter was long-time Phillies shortstop Jimmy Rollins. 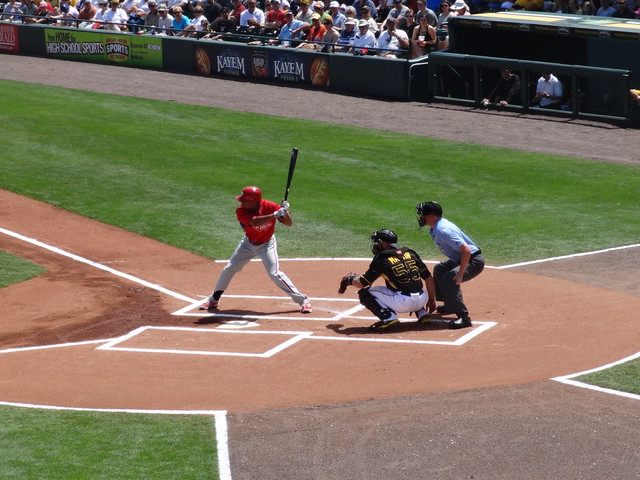 Before we could settle into our seats Jimmy was rounding third base right in front of us in a nice easy jog headed for home! 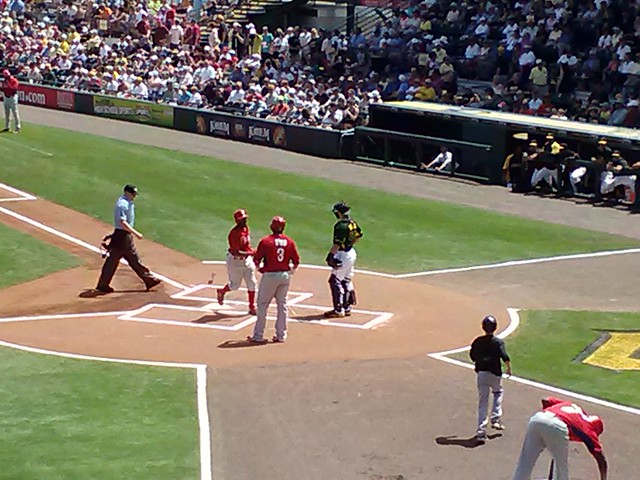 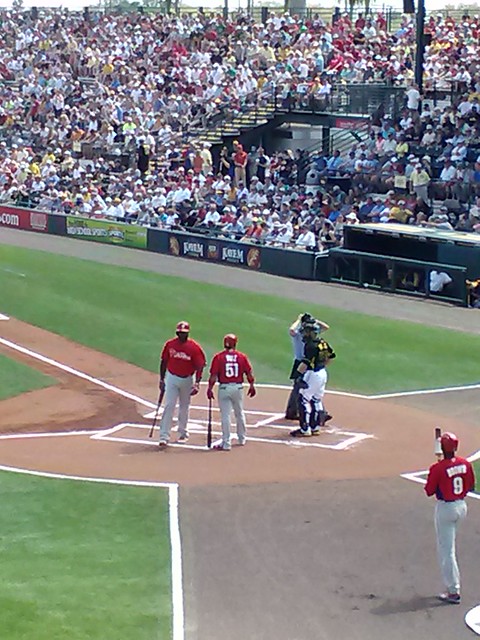 After the early fireworks the game settled into a bit of a pitching duel.  Later in the game the home team fans began to moan and groan, so the Phillies removed their stars.  This allowed the other team (can’t remember their name!) to finally get a few runs.  While the other team had a few more runs than the Phillies at the end, it was clear the Phillies won the game (at least in our minds).

Our day ended with an early dinner at Anna Maria Oyster House followed by a trip to the Tyler’s ice cream shop across the street from our park.  Joe and Deb then headed back to their hotel to prepare for a return to PA the following afternoon.   Both are retiring at the end of the school year so we enjoyed sharing a bit of what retirement looks like.  Hopefully the snowstorm in the weather forecast for Tuesday will miss them!

30 Responses to Spring (Training) is in the Air