Posted on September 12, 2012 by placestheygo

When last we posted, we were enjoying a week in Sacramento.  While there our motorhome friends, Larry and Mary Anne Weinberg finally caught up to us.  They left home in Virginia  just a short time after we left York, PA in early June and followed a similar path across the northern tier of the country.  When we met up they invited us to follow them for a visit to Monterey along the Pacific coast.  While a trip to the coast was not on our agenda, we liked the idea, so here we are.  Larry is retired military (OK, he was in the Air Force but  that’s almost like being in the military) and has privileges at military facilities, so we are in a military campground called Monterey Pines.  Monterey Pines is a pretty basic park but it has what we need in a park, is right on a golf course, and is within bicycling distance of a Starbucks.  What else could you ask for?

Monterey is a city of 28,000 people located on the southern side of Monterey Bay on the central coast of California south of San Francisco.  The Pacific coast is always cold so we had quite a shock when we exited the motorhome upon our arrival.  When we left Sacramento it was about ninety degrees.  We exited the motorhome and found the temperature had dropped to sixty-four degrees, a normal temperature for mid-afternoon here.  The park is small and only has three pull-through sites, but we were lucky and were able to get two of them.  So we are now parked right behind Larry and Mary Anne for the next week.

We had visited Monterey a few years ago on a motorcycle trip so we knew there is some beautiful coastline to see.  So the afternoon of our arrival the four of us took a ride to the coast to check out the scenery.

In Sacramento it was often over a hundred degrees during the day.  Visiting the ocean near Monterey we had to resort to long pants and jackets!

The next day we set out on bicycles to explore Monterey.  There is a nice bike trail that runs along the bay right through the city, so we spent the day enjoying the sights along the path.

The bike path along Monterey Bay 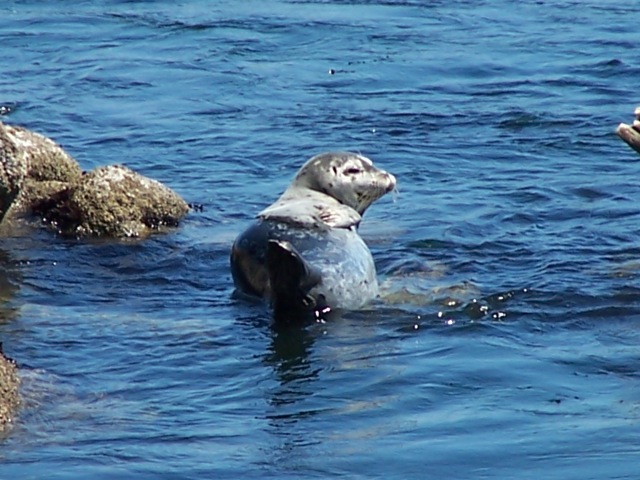 Just a short distance away we discovered the Coast Guard Pier.  The water alongside the pier was filled with SCUBA divers so we rode out on the pier to watch them.

We could hear some barking further down the pier so we rode out to see who was making all the racket.  At the end of the pier we found a long outcropping of rocks protecting the harbor.  On top of the rocks was the source of the noise,  hundreds of seals.

If you’ve never seen seals gathering on rocks you’re missing some fun.  These guys flop all over the place and climb across each other as they move up and down on the rocks, all the while constantly barking what sounds like displeasure at being disturbed by others. 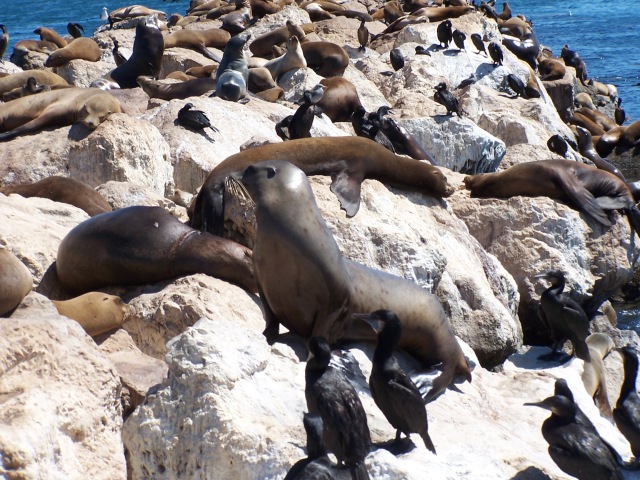 What do you do if you have an itch but do not have arms?  That’s right, use your flippers. 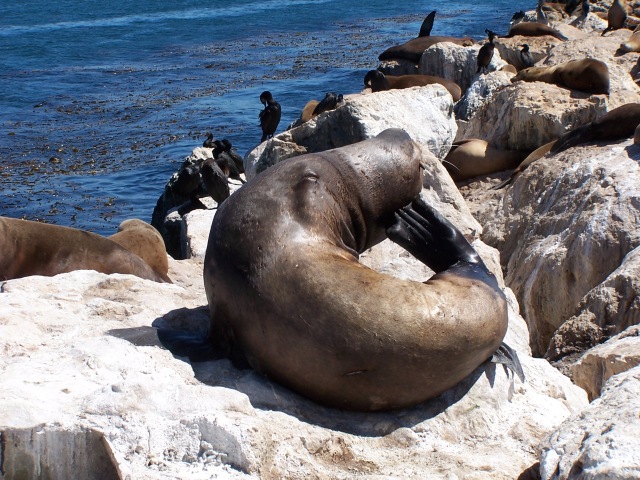 After watching the seals for quite a while, we continued along the bike path through Monterey to the point by the sea we visited the previous night.  Again we were lucky and had a clear, sunny view of the coast.  The coastline along the Pacific is often obscured with a fog bank caused by the cold air off the ocean meeting the warm are of the land.  But this day was sunny and clear.

On our return ride back through town we stopped to visit the Old Fisherman’s Wharf where we enjoyed a bit of ice cream.

The area around Monterey has many sights to see and places to visit, so we’ll be quite busy during our stay.  Look for more blogs on Monterey in the near future . . .

1 Response to On to Monterey