After a nice eighteen day stay in Salem, OR, on Monday we headed south on I-5 headed for Redding, California.  Since we don’t like to travel more than two hundred miles a day, we decided to stop half way at Grant’s Pass, OR for the night.  It was only about two hundred miles to Grant’s Pass so we didn’t leave Salem until just before noon.  But our four hour trip  was delayed more than an hour when two eighteen wheel trucks bumped each other on the interstate just north of Eugene.  They both did a one-eighty on the highway and ended up facing north (instead of south) with one with a double trailer ending on its side.

The accident was about a mile in front of us so we sat on the highway for over an hour until they could clear one lane.  Then, it was on to Grants Pass where we spent the night in a nice RV park near the highway.  Today we continued our journey south into California.

North of Redding the highway passes just below Mt. Shasta, a 14,000 foot mountain at the southern end of the Cascade Mountains.  On a clear day the mountain looks like the picture below.

Photo taken from the Internet

The picture below is what it looked like today as we drove by. 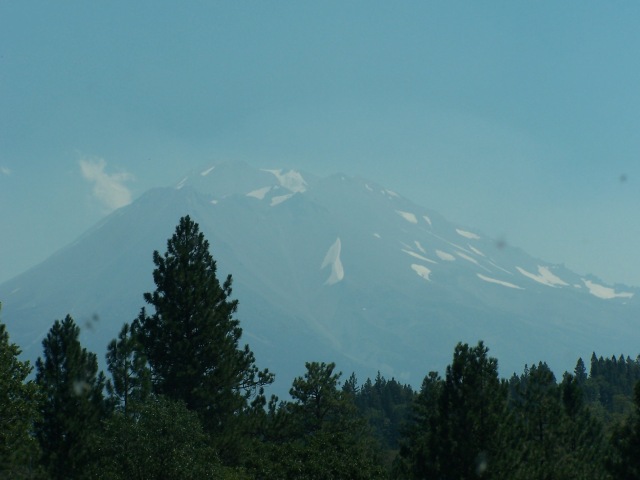 There are numerous forest fires in northern California and the smoke is obscuring the view of the mountains.  The air doesn’t smell like smoke but there is a haze in the distance.

We arrived at Premier RV Resort in the north part of Redding where we will stay for a week.  We want to do some hiking in the Lassen Volcanic National Park but it is located in the area of the fires, so those plans may change.

But there are many other things to see in the area so we will certainly keep busy.  More on that later . . .