We left the Spokane area early on Tuesday morning and headed west on I-90.  We believe that this is the last time we will head west on this journey, as the Pacific Ocean presents too large an obstacle for a motorhome to cross.  So our next trip will involve a southerly direction.

Washington state is very interesting to cross, geographically.  Most people think of Washington as very green, wet, and covered with pine trees.  But that is only the western third of the state.  East of the Cascade Mountains the landscape is mostly flat and dry.

In the middle of the state I-90 dips down steeply into a valley, where it crosses the Columbia River. The river is very wide at that point as it is only a short distance from the Wanapum Dam, which creates Lake Wanapum. 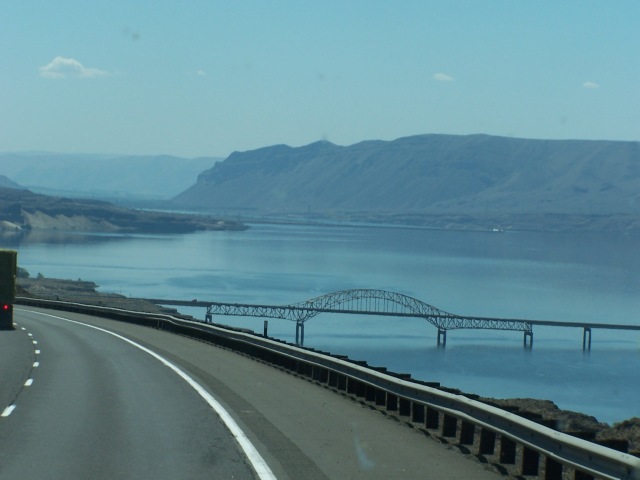 As we neared the Cascade Mountains, off in the distance we were able to see 14,400 foot Mt. Rainier in the clouds on the horizon.

A distant view of Mt. Rainier

We continued west and were treated to some great views of the approaching Cascades.

After going uphill for a long time, we reached the Snoqualmie Pass and began a long descent into the Seattle area.

Downhill in the Cascades

We continued into the Seattle area to exit 22, where we settled into a spot at Blue Sky RV Park in tiny Preston, WA.

We’ll be in Seattle for a week, highlighted by a visit from our daughter, Jessica, who arrives on Friday.  More on our visit to Seattle later . . .

1 Response to Welcome to Seattle