We left Bismarck on Saturday and continued west about 140 miles to the tiny town of Medora, ND.  Medora is a tiny (pop. 112) community located along I-94 in western North Dakota at the entrance to Theodore Roosevelt National Park.  Medora was founded in 1883 along the transcontinental rail line of the Northern Pacific Railway by French nobleman Marquis de Mores, who named the city after his wife.  Marquis de Mores wanted to ship refrigerated meat to Chicago via the railroad. He built a meat packing plant for this purpose and a house named the Chateau de Mores, which is now a museum.  It is also the spot where Theodore Roosevelt came to hunt buffalo in 1882.  Roosevelt returned the next year to live on a ranch in the wilderness north of Medora for two years after the death of his wife and mother on the same day.

The ride from Bismarck is mainly over  flat prairie, but as you approach Medora the terrain changes to Badlands. 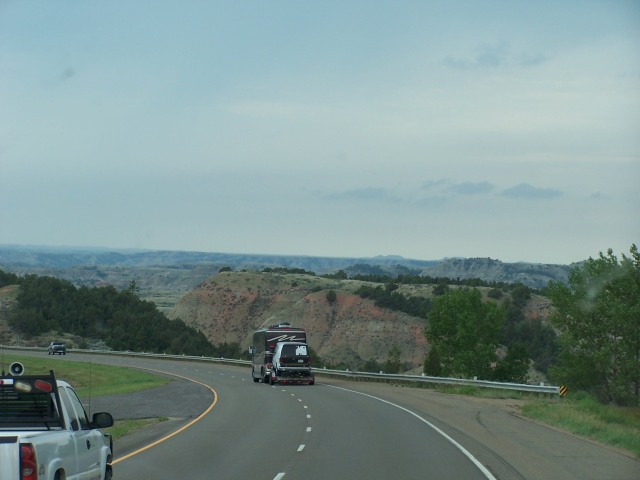 We are parked in the Medora Campground, a no-frills park just outside the town and near the entrance to the park.  As shown in the picture below, we have to use our portable satellite as the tree on our left has a branch that just protrudes enough to block the signal on our roof top dish.  That’s what we call “roughing it.”

After getting set up, we took the bikes out of the car and rode the short distance into Medora to check out the action.  It turns out they were having the 35th Annual Medora Car Show.  We arrived just as the show was ending but did get to see some neat cars.  One was a 1957 Chevy still driven by the original owner.  John took his driver’s test in a ’57 Chevy, but it didn’t look as nice as this one.

We then rode to the National Park Visitor’s Center where they had many displays dealing with the park and Roosevelt’s time there.  One of the displays is of Roosevelt’s undershirt worn as he made a speech in 1912 while running for President as the Progressive Party candidate.

As Roosevelt arrived in Milwaukee to make a speech, an anarchist fired a bullet into his chest.  Fortunately, it struck his pocket where he had his 50 page speech folded up and also the case for his glasses.  But the bullet still penetrated his chest.  When TR realized he had been struck, he insisted on giving the speech before going to the hospital.  The doctors later felt it would be too dangerous to remove the bullet so it remained in his chest the rest of his life.

The next day was suppose to be sunny and hot, but we woke up to clouds, high winds, and cool temperatures.  So we scraped our planned motorcycle ride and took the car for a ride through the park.

As you take the entry road into the park you cross over I-94.   The traffic was a bit light as it was noon on a Sunday.  Imagine the Baltimore Beltway about the same time of day! 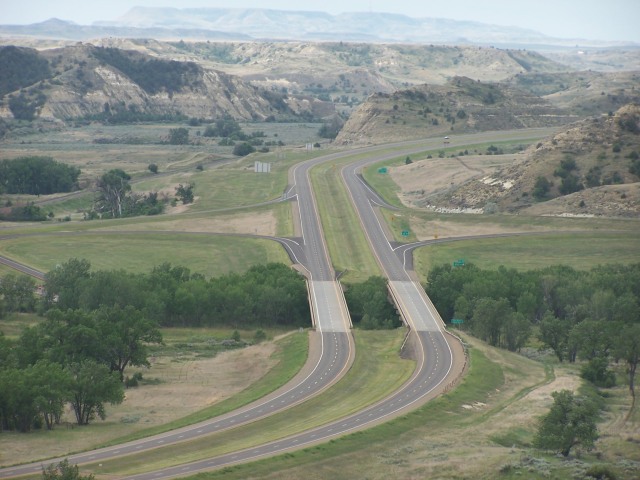 After a short time the sun came out, the temperature rose nicely, and the wind kept blowing.  We spent the next 3 hours exploring the park and enjoying the sites.

Cool of the early afternoon – Badlands in the background

There are a number of prairie dog villages in the park. 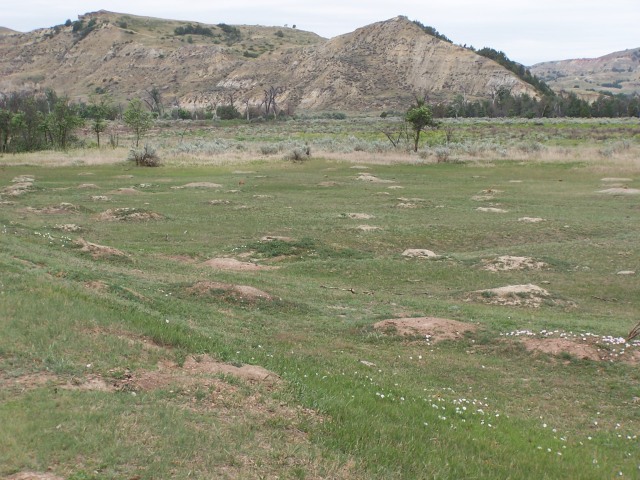 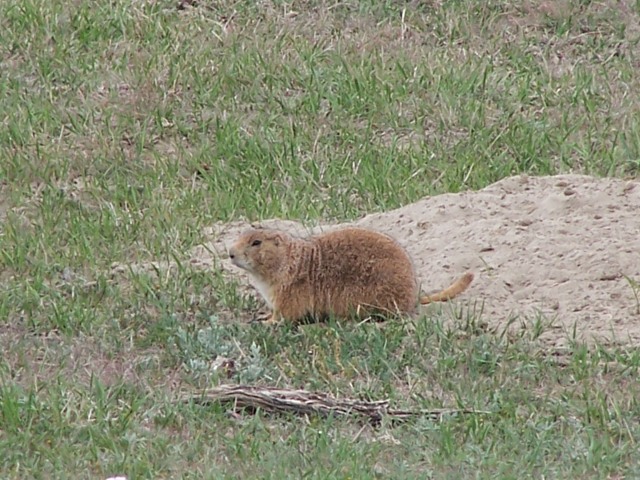 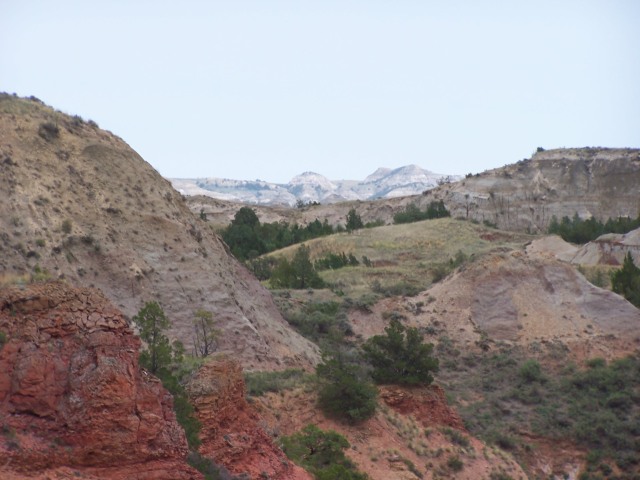 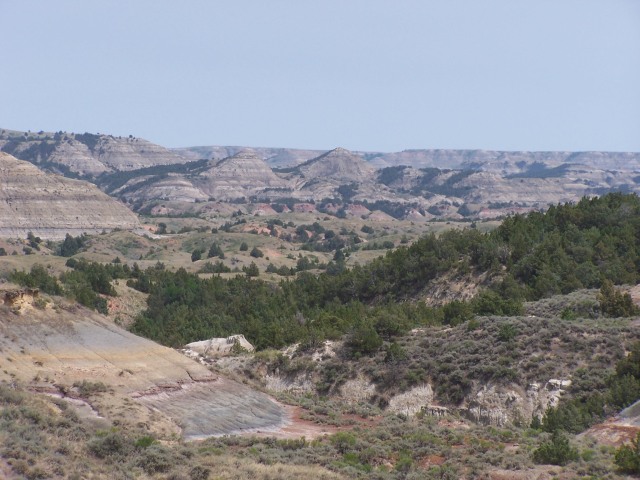 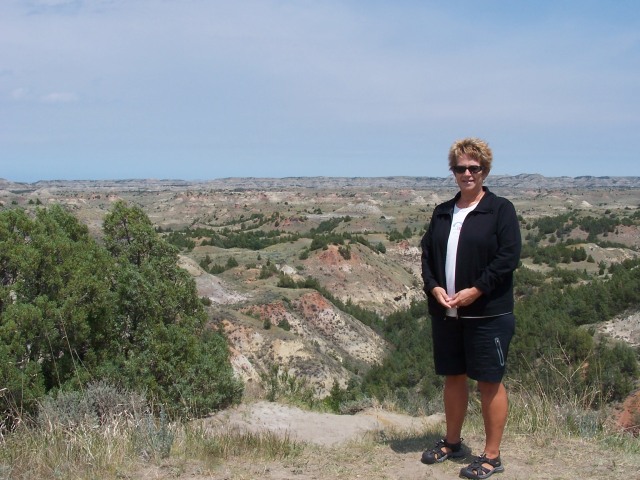 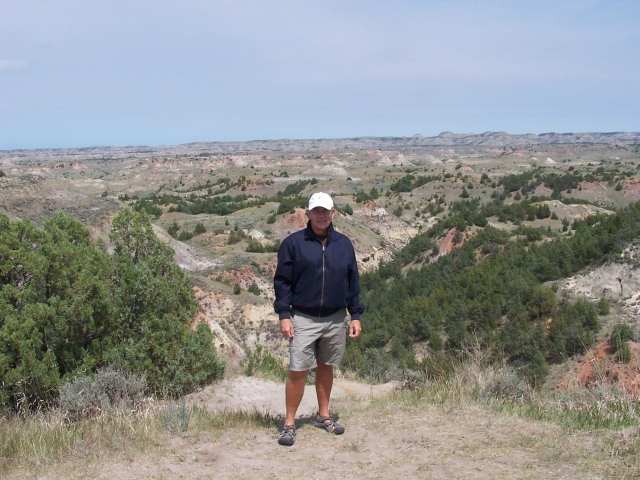 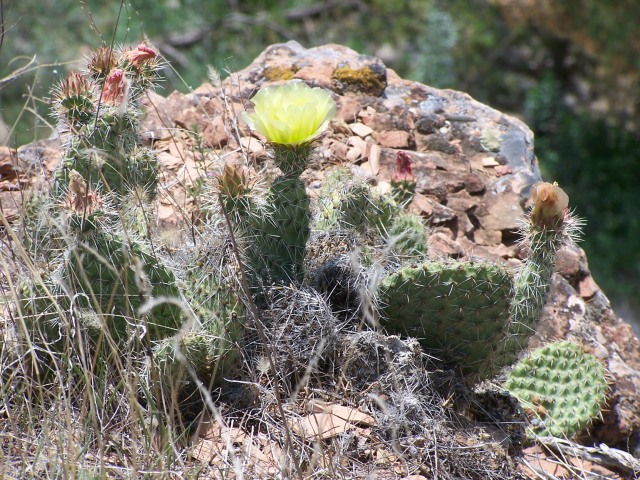 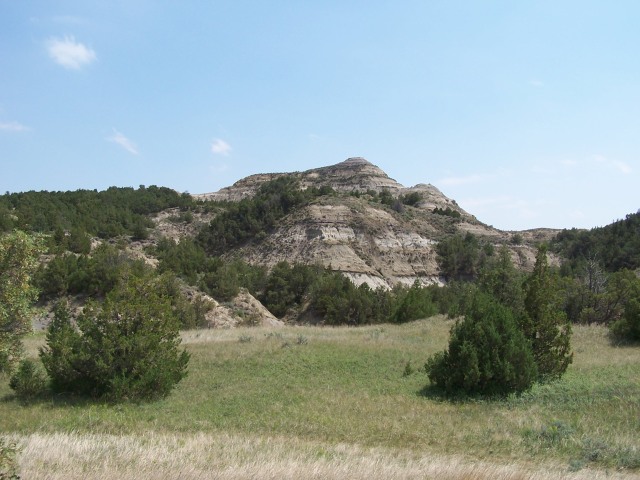 We noticed something on a nearby hill 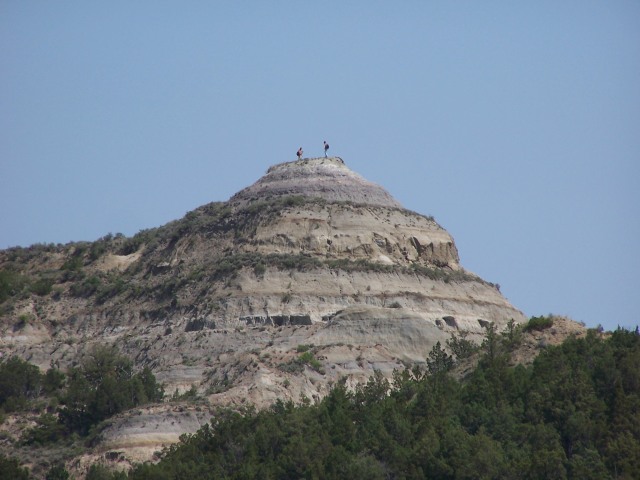 A zoom showed it to be two hikers

There is a great deal of wildlife in the park, but since we were touring during the heat of mid-afternoon we didn’t expect to see many of them.  But we did find some animals brave enough to face the heat. 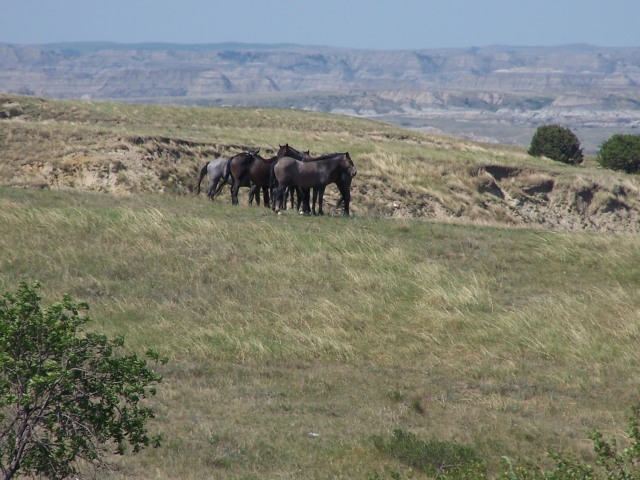 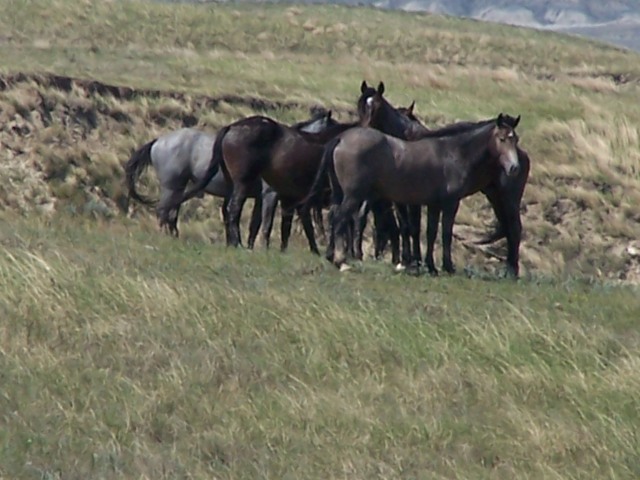 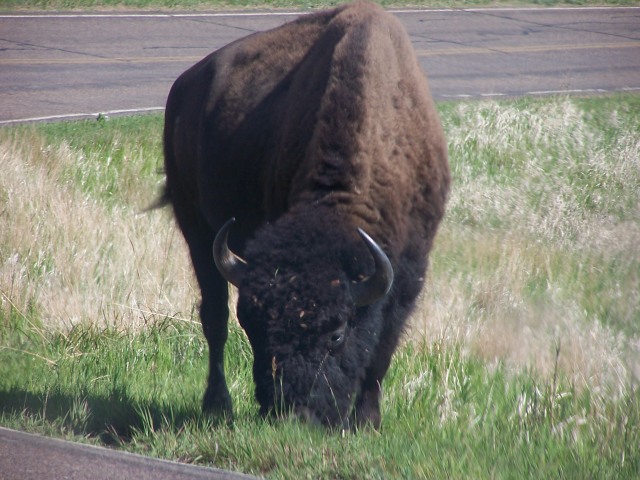 We did have some excitement as we passed an area where they give horseback rides.  In the field next to the road were two riders on horses and a girl on foot.  It was obvious one of the horses was giving the rider a problem, so we pulled to the side of the road to watch.  The horse reared up on two legs and fell over backwards on top of the rider.  The other rider quickly dismounted to help and both horses ran off wildly toward the ranch.  We could hear the rider screaming in pain, so John left the car and ran over to see if he could help, as it appeared the rider was seriously injured.  The girl ran off toward the ranch for help while the other rider comforted the injured rider.  As the injured man rolled over, appearing to be ok, John asked if anything was broken.  He answered that he was uninjured until all three looked at one of his feet, which was pointing in the wrong direction.  The injured rider was in a great deal of pain cursing his injury and stating that he had just left the hospital last week after having had a concussion.  His wife then came running and said for him to lie still as they had called an ambulance.  Since the girl and other rider had returned there was nothing more we could do.  So John wished him luck and we continued our journey.  It’s going to be a long, painful summer for that cowboy!

Tomorrow is supposed to be sunny with a bit less wind so we will take the motorcycle for a ride to the north section of the park.  More on that later . . .