When another sunny day dawned here in Murphy, NC, we again headed out for a motorcycle ride through the mountains.  Heading west on the Smoky Mountain Expressway we took the first decent side road into the hills.  After a few miles we came upon a side road pointing to the Hiwassee Dam.  We took the winding road just past Hiwassee Dam High School (no joke here, its too easy) , rode for about ten miles and were rewarded by a beautiful view of the dam.

The Hiwassee is part of the TVA system of dams constructed during the Depression that control most waterways in the Tennessee River watershed .

We returned to the main road near that “dam” high school (couldn’t resist!) and continued west.  As we rounded a curve in the road, we passed a wide drive through a white arch.

It looked interesting, so we turned around and drove under the gate and up the drive.  Fields of the Wood is called a bible park and is sponsored by the Church of God Prophecy.  It claims to have the largest display of the Ten Commandments in the world built into a hillside.

The park has many other biblical displays and monuments as well as a gift shop and small restaurant.

We continued our journey into Tennessee to visit the site of the kayak competition of  the 1996 Atlanta Olympic Games.  The Ocoee Whitewater Center was built in a rocky river gorge where the Ocoee River was carefully modified into a channel to enhance its rapids.  The river is controlled by another TVA dam, Ocoee Dam #3, two miles upstream. Its hydroelectric power plant is located downstream from the Center, fed by a tunnel and penstock which carry all the water used for power generation, bypassing the section of river where the Whitewater Center is located. Consequently, all water for the Olympic course must be released directly into the river from Dam #3, bypassing the tunnel and penstock and forfeiting the production of 30 Megawatts of electricity. This makes the Ocoee Olympic course the world’s most expensive to operate, and is the chief reason it is no longer used for slalom training and competition. Only the commercial rafting industry can afford the water, as they have to reimburse the power company for the loss of electricity.  Consequently, the river only has good water on summer weekends.

During the ride Pam mentioned that if we saw a fruit stand she wanted to stop to buy some fresh apples.  We stopped at the Visitor’s Center at Ocoee White Water Center and spoke for a while to an elderly lady at the information desk.  While describing the area, she asked if we liked apples.  How did she know?!?!  She gave us a brochure describing a local fruit store, Mercier Orchards,  just to the south in Blue Ridge, GA, so off we went. 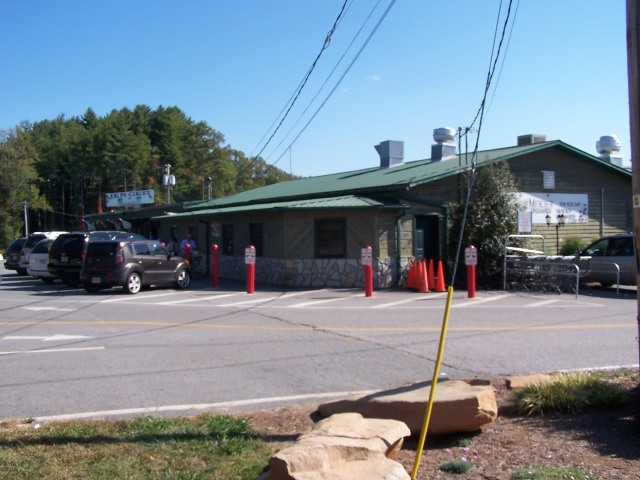 For readers from York County, PA, Mercier Orchards is similar to Brown’s in Loganville, only not quite as nice.  But Pam was able to satisfy her fruit habit with a bag of fresh apples and we also picked up a delicious apple pie, so it was a successful stop.

The weather for the next few days shows rain showers, so we will get a chance to rest a bit.  Sunny skies are predicted for the week-end so we look forward to more motorcycling in the mountains.