Along the St. Lawrence

It’s been a while since we last posted during our stay in York, PA.  It was good to see old friends and daughter, Jessica.  If Tom S. is still reading this blog,  sorry we missed you during our stay.  We stopped at the ice cream shop in New Freedom twice but you were not working; we’ll be passing through at the end of the summer so maybe I’ll catch you then.

We left York in mid-June and drove north to Pam’s mother Fran’s house in Clayton, NY right on the banks of the St. Lawrence River.  While in Clayton we stay at Fran’s house and park the motorhome a block away in a side driveway of her friend, John Eppolito.  Check out a previous blog to see pics from our stay here last year.

We’ve spent the last two weeks completing small repairs at Fran’s house and waxing vehicles (our car, Fran’s car, John’s car, the motorhome).  While here we have also enjoyed watching the traffic on the river, as the channel for the St. Lawrence Seaway runs right in front of Clayton and can be seen from Fran’s front porch.

There was also a visit from a “Living Classroom” vessel named the Lynx, a rigged schooner reproduction of one from the War of 1812.

One afternoon there was a visit from a group of “cigarette” boats that make the short run from Alexandria Bay to the north a couple of times each summer.  The boats have their roots in high powered boats running illegal alcohol during Prohibition then cigarettes from Canada to avoid taxes.  The boats are loud and fast! 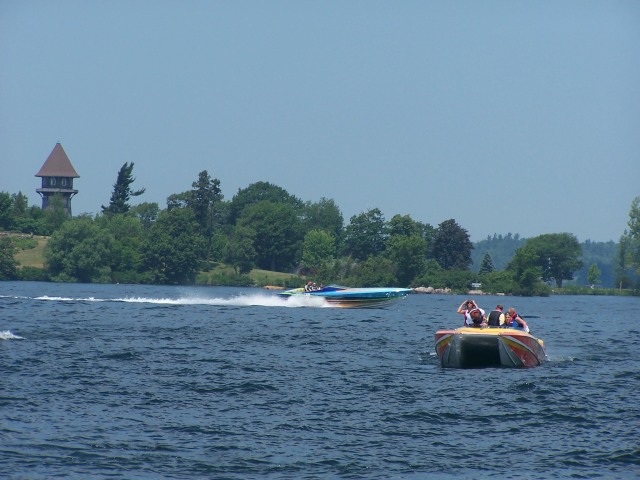 Our daughter, Jessica, decided that since we were in the area and school just ended for the year (she teaches grade 6) it would be a good time to drive up from York for a visit with her grandmother.  Son Kevin, who works in the legal department for Delta Airlines in Atlanta, also decided to come north for a visit and was able to secure a seat on a Delta flight to Syracuse where Jessica picked him up on her way north.  Grandma Fran knew Jessica was coming, but we decided to surprise her with the visit from Kevin. 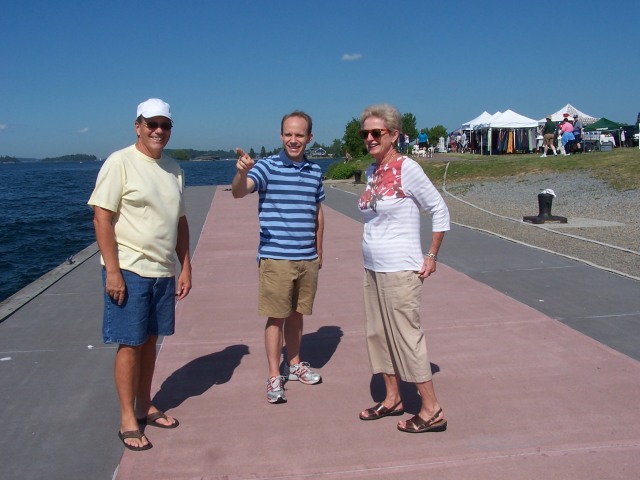 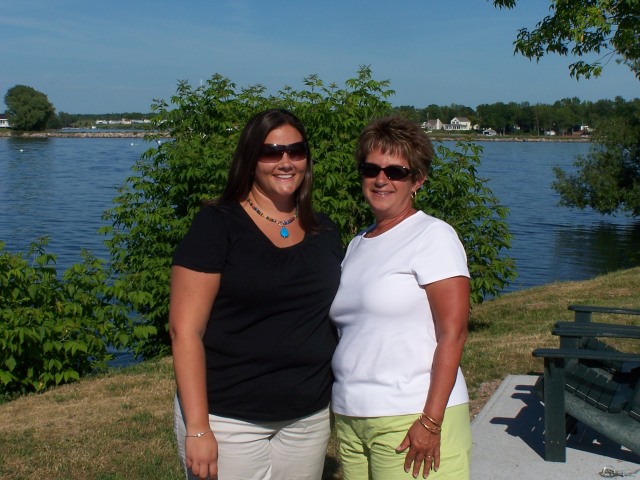 Our visit to Clayton will end on Monday when we head east into New Hampshire.  While in Florida over the winter we met a couple who own the same make of motorhome as us who recently purchased the Twin Mountain KOA in the center of the state, so we thought we would stop for a visit.  After a week in New Hampshire, we will move to a park near Bangor, Maine where we stayed in our first long motorhome trip two years ago.  After that we have reservations for a month on the north side of Prince Edward Island in eastern Canada.  We are not sure we want to stay that long but the person taking the reservation suggested we book a month as we can always shorten our stay if we wish.  From PEI  who knows . . .

3 Responses to Along the St. Lawrence