Posted on December 7, 2010 by placestheygo

We are currently staying just north of Savannah, GA in a small RV park called Hardeeville RV in South Carolina.  There are no extras (pool, playground, restrooms) at this park but it has what we need (level site, electricity, water, and sewer) and the location is great to tour Savannah.  You just head 10 miles south and cross the bridge over the Savannah River into the city. 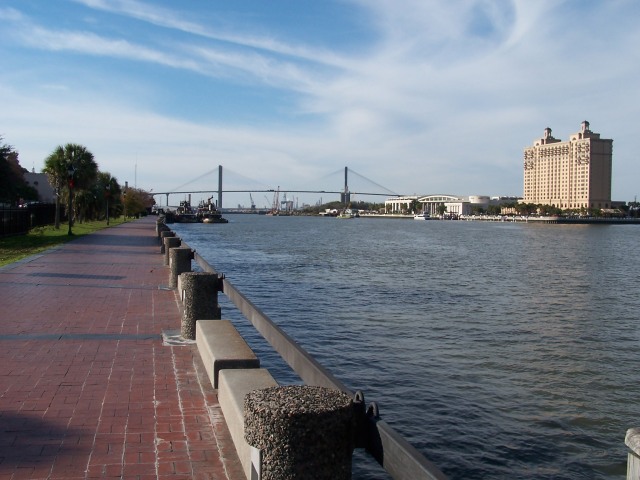 Tallmadge Bridge across the Savannah River (Savannah side)

The city of Savannah was established by English general James Oglethorpe in 1733 as a military buffer for the English against the Spanish in Florida.  While it was set up in classic grid pattern, there are 22 squares throughout the city providing quiet parks with benches and shade.  One square was of particular interest to us. 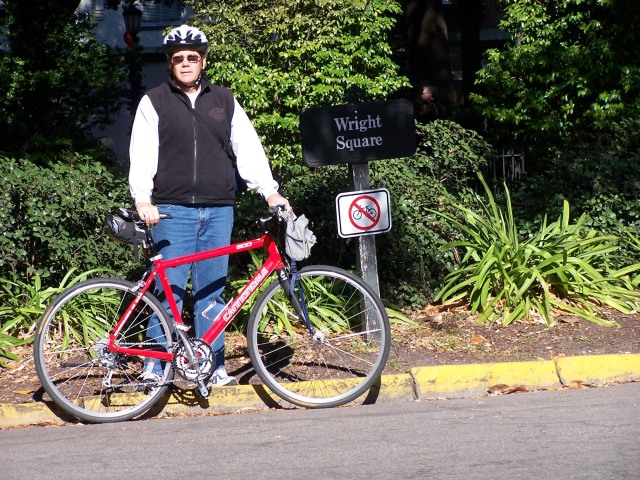 One of the best ways to get to know a city is by taking a guided tour, and Savannah has a number of trolley tours available.  We ended up at Old Savannah Tours and took a 90 minute ride through the city, with a life-time resident named Chris as our guide.

After the tour, we took the bikes out of the car and retraced much of the tour by ourselves.  One of the signature features of Savannah are the large oak trees covered with Spanish Moss that line many of the streets.

Actually, the Spanish Moss isn’t Spanish and it isn’t moss.  It’s really an “air plant” that absorbs nutrients from the humid air and rain.  While it rarely kills the tree, it does reduce it’s growth.

Chris, our tour guide, said that in the summer the city is inundated with girl scouts.  Below is the reason for their interest in Savannah. 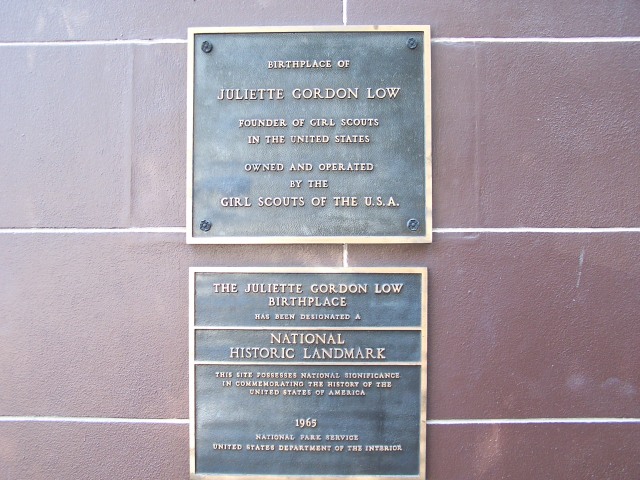 Another spot many tourists like to visit is this restaurant.

The restaurant is called “The Lady and Sons” and is owned by Paula Deen of the Food Channel fame.

We’ll have more on Savannah in a later post.  It is almost time to move on to (hopefully) warmer climates.  Last night it was in the mid-20s here, very cold by local standards.  Usually we are connected by hose to a local water source, but with the low temperatures predicted, we filled our on-board water tank and disconnected the outside hose.  The water tank and pipes receive heat from the coach’s furnaces (2 propane heaters) so they will not freeze.  Wednesday we head to central Florida where it is also cold but predicted to warm later in the week.  We sure hope so ! ! !