The Locks at Sault Ste. Marie

On Wednesday we took the motorcycle for a short ride (100 miles one way) across the Mackinac Bridge to the upper peninsula of Michigan.  Our destination was the small city of Sault Ste. Marie where ships transitioning in or out of Lake Superior go through a lock around the rapids on the St. Marys River.

The Mackinac Bridge is worth the trip by itself.  At five miles in length it is one of the longest suspension bridges in North America.  The trip over was great, but the trip back was just a bit nerve racking as the wind had picked up and construction forced you into the center lane most of the time.  The right lane is concrete but the center lane is open grate, which is fine in a car but on a motorcycle you feel like you are weaving back and forth.  But we made it with no trouble. 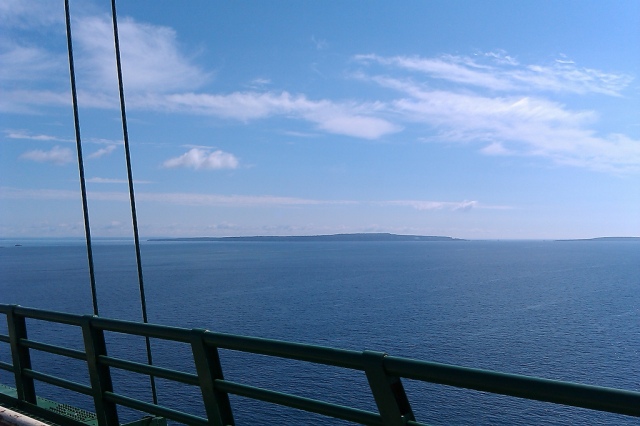 Mackinac Island from the bridge

If you look at the previous post you’ll see a couple of photos taken from the shore on Mackinac Island with the bridge in the background.  The above picture shows the reverse view.

We then took some back roads across the Upper Peninsula till we came to Sault Ste. Marie where the Soo Locks are located.  At the visitor’s center at the north side of the Mackinac Bridge the attendant said that a group of tall ships would be using the canals beginning at 1:00 pm.  When we arrived at the locks at 12:15 no one there knew what we were talking about, so the visitor’s center info must have been incorrect.  But while we were there two tour boats, a barge, and a large laker (shipping boat that only goes on the Great Lakes as opposed to a “salty” which also sails the ocean) went through the two usable locks. 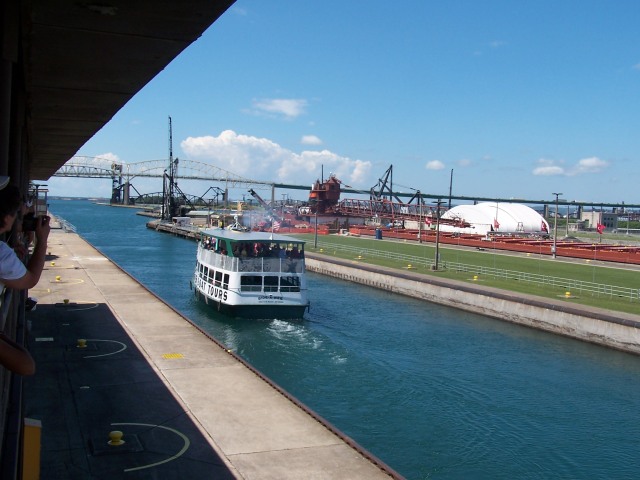 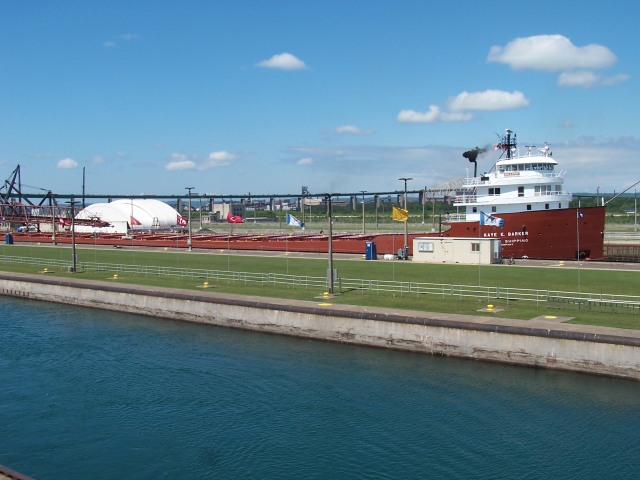 Water is out of the lock

Sailing on down stream

In the visitor’s center next to the lock is a large aerial photo of the complex.  The two locks on the left are the ones that are operational.  The two on the right were built almost a hundred years ago and are too shallow for modern boats.  A bill authorizing the completion of a new lock by combining the two older ones has passed and a nice groundbreaking ceremony has taken place with impressive pictures of politicians, but they have not allocated the money to do the job so no further work has taken place. 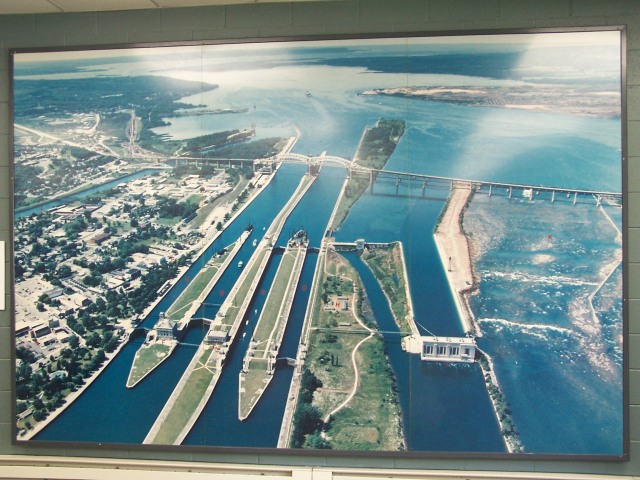 Today has been a day of shopping and relaxing so there are no photos to post.  That will certainly send a sigh of sadness to all our millions of followers, but it is cloudy and 72 degrees (the rest of the country is in the 90s) so its nice to just kick back for a day.

3 Responses to The Locks at Sault Ste. Marie