We’ve really enjoyed our week along Lake Michigan near the Sleeping Bear Dunes National Lakeshore.  The weather has been great, with warm (almost hot) breezy days and cool nights (air conditioners off, windows open).  We are sitting in a “resort” park on a site that is on etched concrete with landscaping and manicured lawns.  It is great but is spoiling us, as not all sites will be near as nice as this.

The little village of Empire is four miles from us and sits along Lake Michigan.  The town beach is very nice with great natural sand and beautiful, clean, fresh water.  We spent two days just sitting on the beach enjoying the scenery.

Since the beach faces to the west we went down one evening to watch a beautiful sunset.  We are on the far western edge of the Eastern Time zone so sunset is not until 9:30 PM. 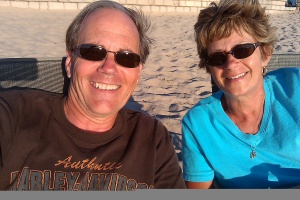 Celebrities spotted on the beach 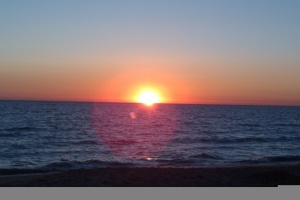 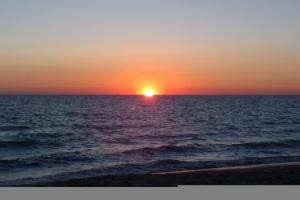 Another day we took a ride through a seven-mile scenic drive along the dunes that mark this area. The park takes its name from an Ojibwa Indian legend that tells of a bear and her two cubs forded to swim across Lake Michigan to escape a forest fire. The mother reached the shore safely and climbed to the top of a dune to await the cubs, who lagged behind and never arrived. She still maintains her vigil in the form of a dark hill of sand atop a plateau, while the errant cubs have become the North and South Manitou islands. It’s a nice story but we are college educated and find it difficult to believe. But that’s the story the park ranger told and they wear a big hat so . . .

At one point on the drive you are able to walk out on the peak of a dune 450 feet above the shore line. A local challenge is to go down the dune to the shore and climb back up again. We looked at it as an IQ test. Those who did the climb failed; those who watched from above passed. We passed! 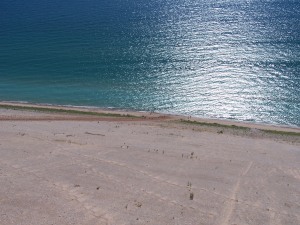 View from the top of the dune 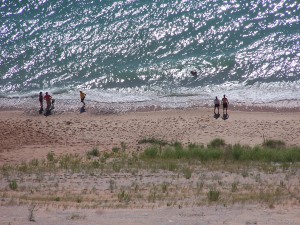 Zoomed from the top of dune

View as you begin your descent!