We spent Thursday in Springfield checking out more sites from the life of Abraham Lincoln.  The highlight of the visit is a tour of the only house Lincoln ever owned, a two story home a few blocks from the old capitol building.

When Lincoln purchased the house it was small with only one story and a small room on the second floor.  As his law practice grew, he expanded the house until it looked like the picture.  His son, Robert, sold it to the state of Illinois for $1 with the stipulation that there never be an admission charge for the public to visit the house.  The federal government now owns the house and four blocks around it in what is the only national park in Illinois.

Lincoln was a partner with two different attorneys during his over 20 years in Springfield.  Both firms had a small, one room office in the building on the corner, the first on the second floor, and the second on the third floor.  In the second building space was rented by the federal government for a small federal court room where Lincoln often argued cases.  But most of his time was spent in the Illinois State House across the street, which has been restored and is open to the public today. 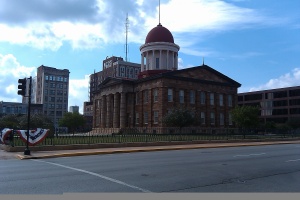 The entire area is very well-kept with tours available at no cost throughout the day.  It’s a great place to visit for anyone, but a must for anyone with an interest in American history.

We stayed on the grounds of the Illinois State Fair during our visit and were exited to find that they were having a pig competition just down the street.  It’s difficult to believe but there was no charge to view the competition and a visitor could just walk in to the stall area next to the competitors.  But watch your step as there are swine souvenirs left on the concrete.  One of us sort of “stepped in deep s***” and spent the rest of the evening with a toothpick scrapping the experience out of his tennis shoe! 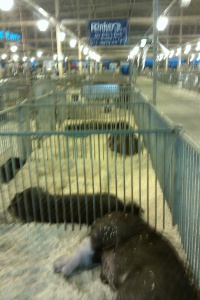